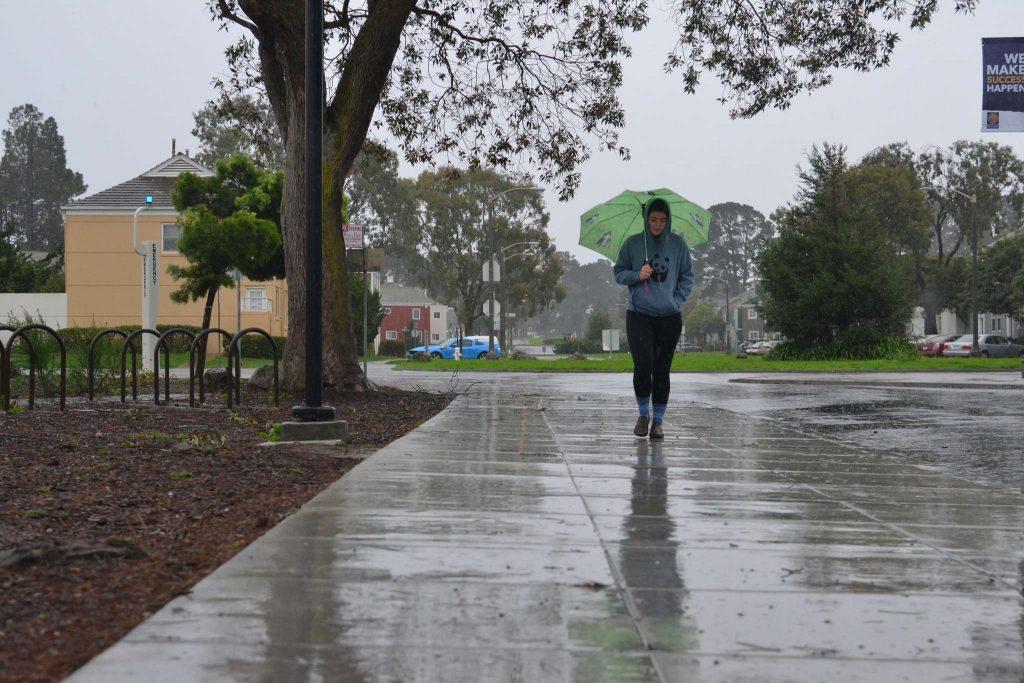 Dorm resident Rainey walks to the designated smoking area on her way to her room in Mary Ward Hall Thursday, December 11, 2014. Rainey says that the dorms have been hot, because everybody is staying in with the windows closed. "Netflix has been slow because everyone's taking up the bandwidth." Helen Tinna / Xpress

SF State student Wesley Mason lives in the Excelsior neighborhood and said he experienced minor flooding in his bedroom due to a misdirected drainage pipe in his building. Despite the harsh conditions, he said it was not the worst storm he’s seen.

“It’s probably smart that they kept kids home in the grand scheme of things, but I think they could have opened and everything would have been fine,” Mason said.

Elias Agueros, a resident of Parkmerced, said the he was prepared for the storm and was actually looking forward to it.

Students received an email from the University around 4 p.m. Thursday stating that the campus withstood the heavy rain with “minor water intrusion and short-term power outages.” The email also confirmed that the campus will resume normal operations Friday.

San Francisco Unified School District closed all campuses for Thursday in response to the winter storm. A press release from the district said that the intense weather could result in operational challenges like power outages.

PG&E released a live map for customers to track power outages in their area. A major failure at the Larkin Street substation caused early morning blackouts, leaving the northern side of San Francisco powerless from Seacliff to Embarcadero. The Mission-Bernal Heights area and other parts were affected as well, according to service updates.

BART reported system-wide delays due to the weather. Montgomery and San Bruno stations were closed for power outages and flooding, respectively. As of the Thursday evening, all stations had restored service.

According to the SFMTA Twitter page, the 22, 24, 30, 41, 45 and 49 bus lines experienced major delays and detours due to power outages in the early morning, but resumed regular service toward the afternoon.