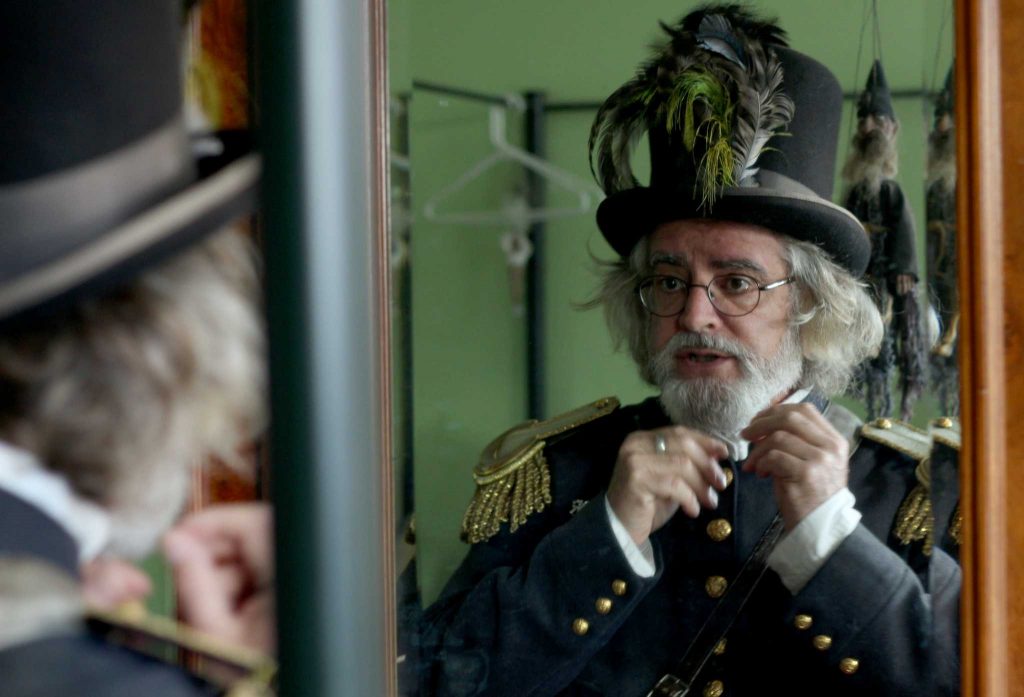 Joseph Amster looks into the mirror while dressing for work in San Francisco, Calif. Thursday Dec. 4.

Henry Perez
Former SF State student Joseph Amster dropped out of school more than three decades ago after deciding a Theatre Arts degree would not take him to where he wanted to go in life.

In 2011, Amster returned to San Francisco, where he began a career dressing up and giving city tours as historical figure Emperor Norton three days a week and working as a bus tour guide the rest of the week.

Joshua Abraham Norton, better known as Emperor Norton, was an 18th century eccentric of San Francisco whose promulgations received acclaimed respect throughout his life. Dissatisfied with governmental activities at the time, Norton declared himself “Emperor of the United States” in 1859 and issued a decree formally abolishing the U.S. Congress, and despite possessing no legal power, he garnered the support and attention of many Bay Area residents, even after his death in 1880. Amster was introduced to the Emperor Norton character by a man who was portraying the unique luminary but no longer wanted to play the role. Seeing many parallels between Norton’s colorful life and his own, Amster embraced the part and began researching extensively, developing the character to fit into his existing role as a tour guide.

Assuming the role of Norton has given Amster a way to earn a living and become a San Francisco public figure, something that he desired since returning into the city three years ago. His costumed persona has been the subject of numerous documentaries and articles regarding the life of the late Emperor Norton.

Amster has previously worked a variety of jobs– from magazine editor for an LGBT publication to managing an arts supply store in Laguna Beach, Calif.

Amster said the financial gain from his tour guiding is not profitable, but he values what he does. “I’m content with being my own boss and making his own schedule,” said Amster, who said he plans to continue his Norton role for many years to come.