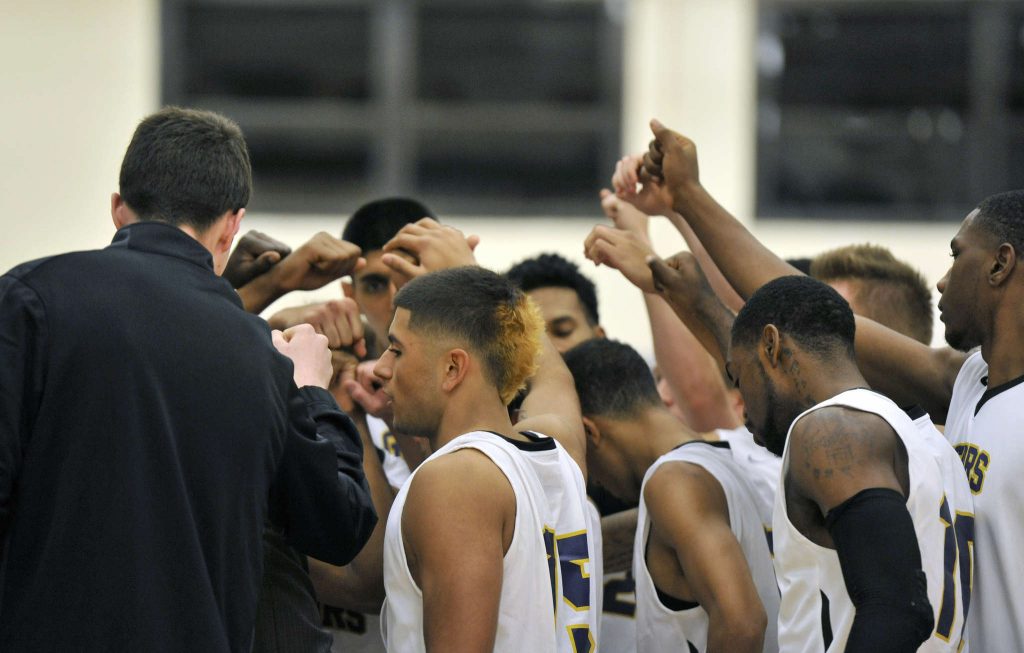 SF State Gator players come together in a huddle before returning to the court against the Academy of Arts Urban Knights at SF State on Tuesday Nov. 25, 2014.

After a 14-12 season that finished in a disappointing loss to Chico State in the playoffs last year, SF State’s men’s basketball team looks to build off last season.

Led by fifth year head coach Paul Trevor, the Gators are off to a great 8-8 start and hope to advance further into the playoffs by working together and continuing to full court press.

With a scoring defense now ranked seventh in the nation according to the California Collegiate Athletic Association website, the Gators have been holding their opponents to 60.1 points per game and average 2.5 blocks and 8.4 steals per game through 12 conference games.

“They’ve improved on everything,” Trevor said. “When we started the year we didn’t know who we were. When we have a team make a layup at the end, we want to hold all teams under 60 (points), so those hurt us, we take a lot of pride in that.”

Offensively, the Gators have multiple players who are ranked in the top 10 in six statistical categories in the CCAA. Senior guard Bren Haley is first in assists and turnover ratio, and he is third in the West Region with 61 assists. Gators forward Udun Osakue is shooting 54 percent from the field, placing him fifth, and his 13.4 points per game average is seventh best in the conference.

“I think we share the ball very well,” Haley said. “We were talking about how young we were at the beginning of the season and I feel even though we have a lot of young players, we’re pretty seasoned and improving.”

The team is currently in the middle of the pack in the CCAA conference, sitting with a tied record of 6-6 with Humboldt State, Sonoma State and Cal State San Bernardino. The team will head on a big four-game road trip that could have implications on their season going forward. The Gators have had a tough time on the road with an 0-6 record, but hope to change that when they begin this upcoming trip.

“I think we’re growing up as a unit and everything we do on offense and defense really relies on us being one unit to be successful,” said SF State’s forward Jon McMurry. “I think coming along as a team has been the biggest move forward.”

Going forward, the Gators have a four-game homestand in February against the top four teams in the CCAA conference. A combination of a successful road trip and defending home court could put SF State in a prime position to make a run at the conference title.

The second half of the season will begin Thursday with a game against 6-6 Cal State San Bernardino in Southern California.