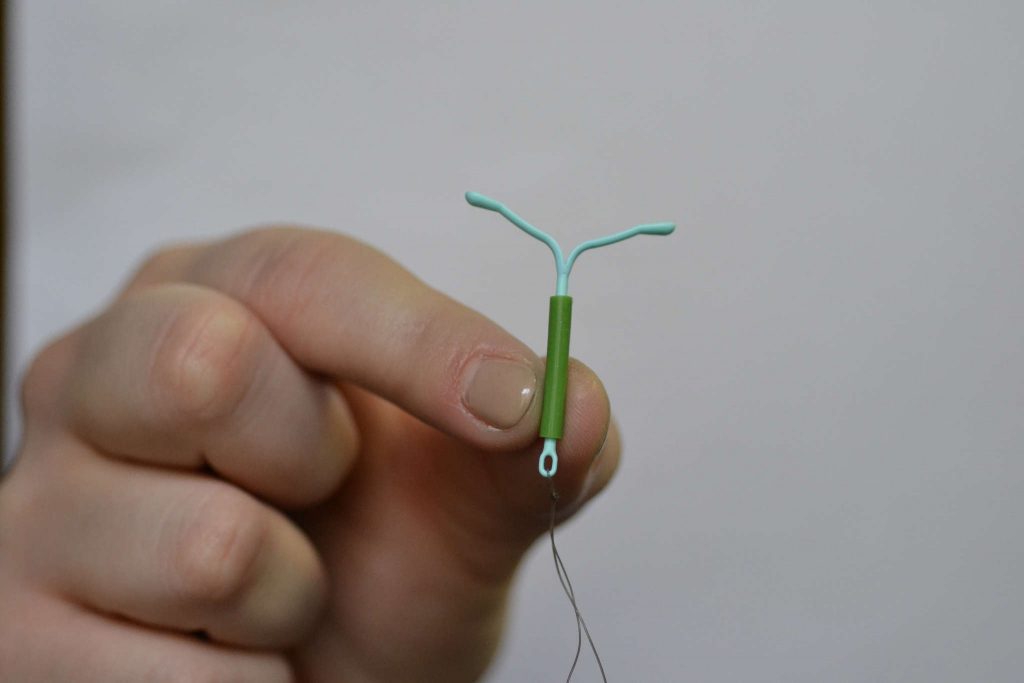 An SF student holds a hormonal IUD. The health center on campus is now offering the Intrauterine devices to students on Tuesday, Jan 27.

Student Health Services is equipped to insert the thumb-sized devices, brand named Mirena, which prevent pregnancy with a 99 percent effectiveness for up to five years. The health center will also offer ParaGard, an IUD that lasts up to 12 years, in April, according to Women’s Health Nurse Practitioner Glenna Lee.

An intrauterine device is a T-shaped plastic tool that is inserted into the uterus as a means of birth control. Mirena releases small amounts of hormones to keep sperm from reaching the cervix, while ParaGard uses copper instead of hormones to prevent pregnancy. ParaGard IUDS do not alter periods, according to Lee.

Family Planning, Access, Care and Treatment provides coverage for students who are enrolled in the program, with a cost of up to $800 for non-members, Lee said. Students with health insurance can utilize their providers for coverage.

“The IUDs are really great because they’re considered long-acting contraceptives and it’s awesome for people who already know they don’t want to have kids for the next five to 12 years or even less than that,” Lee said. “It’s something that you just leave in that someone does for you and you don’t have to really worry about it.”

The addition of IUD availability on campus follows recent data from the Center for Disease Control that suggests long-acting reversible contraceptives were more popular in women ages 25-34 compared with other age groups.

The procedure does not require an operation or anesthesia, but the patient might feel some discomfort, which can be managed through over-the-counter pain medicine, Lee said.

“I’m super excited because I think long-acting contraceptives are an important movement in women’s health,” Lee said. “It’s such a great thing to offer women of this age group (college or graduate age) because these women are busy with their lives and if pregnancy isn’t on their mind, then why not use an IUD to kind of help solve that?”

SF State student Alexa Cicchetti said that she sees the benefit in the service but is concerned that the health center might not be equipped with the proper training to implement the procedure.

“I know I wouldn’t want someone doing something invasive to me if they didn’t have certain credentials to do so, but if they’re allowing them to do that then I hope they would,” Cicchetti said. “I’d go to the health center if I wanted pills or something within that matter but I feel like with something like that then I’d want to go to an actual gynecologist.”

Cicchetti said that if she weren’t under her current health coverage and she wanted an IUD, she would consider going to SHS for the procedure.

“From what I can gather, they (SHS) have been wanting to do it for a really long time and they just haven’t had any practitioners that were familiar with the placement procedure or were comfortable with it, “ Lee said. “They just didn’t have anyone here to train them.”

Maricsa Aguilar, a criminal justice major, has three family members who use IUDs for birth control.

“My sister and sister-in-law have had theirs in for around three years, and my aunt for even longer,” Aguilar said. “As soon as they took it out they got pregnant. After their second child they put it back in.”

Aguilar said she thinks it is good that the health center is offering this service to female students, but getting pregnant should not be their only fear.

“For birth control it’s great but I strongly believe that women should use condoms because contraceptives don’t protect you from STDs,” she said.

Lee, who worked with IUDs regularly at Planned Parenthood before being hired at the health center in November 2014, is the only practitioner currently performing the procedure at SHS.

“The procedure is in place to stay, but how we run it in-house might change a little bit,” Lee said.