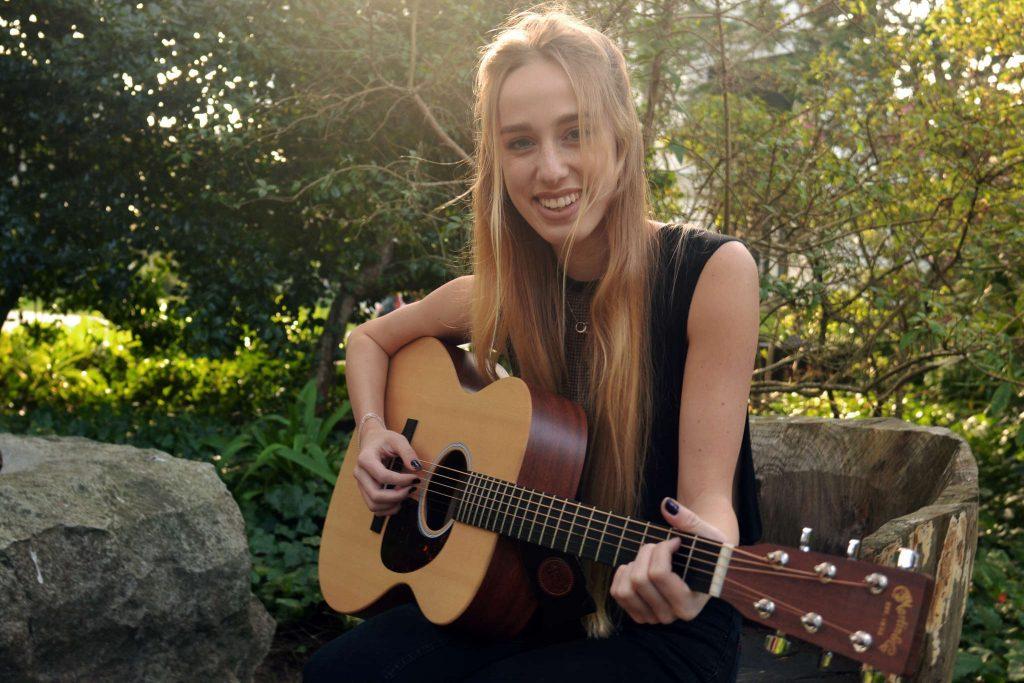 SF State freshman, Chandler Leighton was recently awarded a ticket to Hollywood after auditioning on the 14th season of American Idol. Leighton said she decided to give the competition a shot after singing videos she had posted online caught the attention of Idol representatives, who suggested she try out. The San Francisco auditions where Leighton was awarded her “golden ticket” happened back on Sept. 26, but are scheduled to air on January 28.

With butterflies in her stomach and a black guitar in tow, an SF State audio production student swooned the American Idol judges with a sweet melody.

Chandler Leighton, 19, earned her ticket to Hollywood in the San Francisco round of auditions, which aired nationally Jan. 28. What audiences might not have seen behind the singer’s calm smile and soft voice was the nervousness that rumbled within her.

“As soon as I walked in there it felt like I blacked out,” Leighton said. “I was so anxious. When you’re in there, you’re listening to them (the judges) talk but your mind is going one thousand miles an hour.”

American Idol, which is in its 14th season, has spawned stars like Kelly Clarkson, Carrie Underwood, Jennifer Hudson and Adam Lambert. Leighton was one of thousands of hopefuls who audition every year to compete in the national singing contest.

“You sit there and realize like ‘Wow, what can make me different than everyone around me?’” Leighton said. “You have to push yourself to stand out and get the spot.”

Leighton’s father, John Leighton, was with her during the audition at the Cow Palace Sept. 29. He remembered seeing the mass crowds of people waiting to audition and the cameras stationed at every turn. Through the chaos and interviews, his goal was to make his daughter feel comfortable and serve as her biggest fan.

“I wanted to keep her as calm as possible,” John Leighton said. “I told her, ‘If you need support, tell me. If you need me to shut up, tell me. It’s about you, not about me.'”

Years of performing on and off the stage helped Leighton make it through to the Hollywood round of the competition. She participated in musicals in elementary school, often landing the lead roles, and continued her interest in singing by joining choir in the sixth grade.

“It was nice to find something that I was really passionate about at a young age that I could get good at,” Leighton said.

She continued to sing in choir throughout middle school and into high school while building a close bond with her choral teacher of seven years, Gianna Summers.

Summers described Leighton as a quiet leader who was always willing to help others in class and was eager to learn.

“She is one of the most kind, humble individuals that I’ve ever met,” Summers said. “She’s not one of those musicians that thinks, ‘I’m amazing.’ She just loves to learn.”

Leighton developed her musical skills outside of the classroom after her father bought Leighton her first guitar. After several YouTube tutorials and hours of practice, she taught herself how to play the instrument and began posting her own renditions of her favorite songs online.

Her YouTube Channel, which has over 3,000 subscribers, includes acoustic covers ranging from “Kiss Me” by Ed Sheeran, “Hey Ho” by the Lumineers and “Gas Pedal” by Sage The Gemini.

Leighton also posts shorter videos on her Instagram account. It was through one of Leighton’s videos that American Idol reached out and encouraged her to audition for the show.

“I was super shocked,” Leighton said about the response. “To me, I’m not a Kelly Clarkson. I’m not a Carrie Underwood. I’m me.”

Though Leighton could not share how far she got into the competition due to a nondisclosure agreement, she did say that she plans to be in the music industry regardless of whether she is singing songs or producing them.

“It was the greatest experience and I wouldn’t do anything to take it back,” Leighton said. “Now that I have this experience I have to keep moving and pushing hard.”