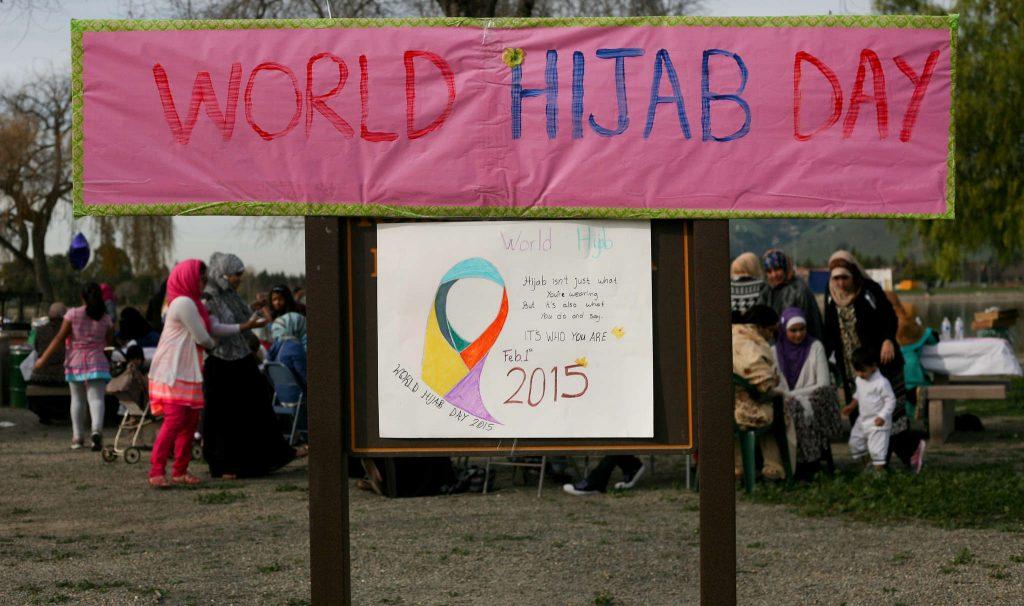 Families from all around the area join together to celebrate World Hijab Day at Lake Elizabeth in Fremont, Calif,. Sunday Feb. 1, 2015.

Muslim and non-Muslim women across the globe united Feb. 1 for the third annual World Hijab Day, an international event designed as an open invitation to don the hijab in order to dispel misconceptions surrounding the headscarf.

The hijab is a traditional covering for the hair and neck that is often worn by Muslim women and is sometimes worn as a symbol of modesty, privacy and morality. The hijab is widely perceived in the Western world as a symbol of male-implemented oppression and women who wear the hijab often face discrimination.

Mina Wardak, 20, is a nursing student and officer for the Muslim Student Association at SF State who said she finds the stereotype especially frustrating as a hijabi (a woman who wears the hijab).

“The hijab does not oppress women,” Wardak said. “Rather, it liberates them. Liberates them from society’s expectations of women. Oppression is when women are solely displayed as objects of beauty and not valued for their self worth, their intelligence and personality.”

“I feel like I’m more me ( while wearing the hijab), more connected to myself and my faith,” she said.

New York resident and social activist Nazma Khan founded World Hijab Day in 2013 with the purpose of fostering religious tolerance and understanding by inviting non-hijabi Mulsim and non-Muslim women to experience the hijab for one day.

“I figured the only way to end discrimination is if we ask our fellow sisters to experience hijab themselves,” said Nazma Khan on the event website.

A sense of inequity is familiar to Maryam Khan, who made the decision to become hijabi after returning from a three-week pilgrimage, or umrah, to Mecca midway through her senior year in high school.

“I felt a change in how fellow students approached me,” Maryam Khan said. “There was more avoidance, not as much joking and playing around. People were afraid to ask about it.”

Wardak, on the other hand, is often asked why she started wearing the hijab at such a young age.

“When I was in the third grade a classmate asked if I was Mexican,” Wardak said. “I remember completely ignoring him and walking away confused. The next morning, before heading out to school, I went to my mom’s room and grabbed one of her hijabs and put it on. When I got to school the first thing I did was approach that same kid and told him as I was pointing at my hijab, ‘I’m Muslim!'”

Wardak has continued to wear the hijab ever since.

Organized through social networking sites and often manifesting in localized events, the World Hijab Day website said the event has garnered interest from Muslims and non-Muslims in more than 120 countries. The movement said it hoped to draw 10 million participants in this year’s event.

The Bay Area World Hijab Day met Sunday at Lake Elizabeth in Fremont for a potluck lunch and festivities.

The Muslim Student Association will hold its own Wear the Hijab Day at the Cesar Chavez Student Center Monday.

“It’s a great initiative to bring people from all over the world, whether they are Muslim or not, to participate in bringing awareness to the hijab,” Wardak said.