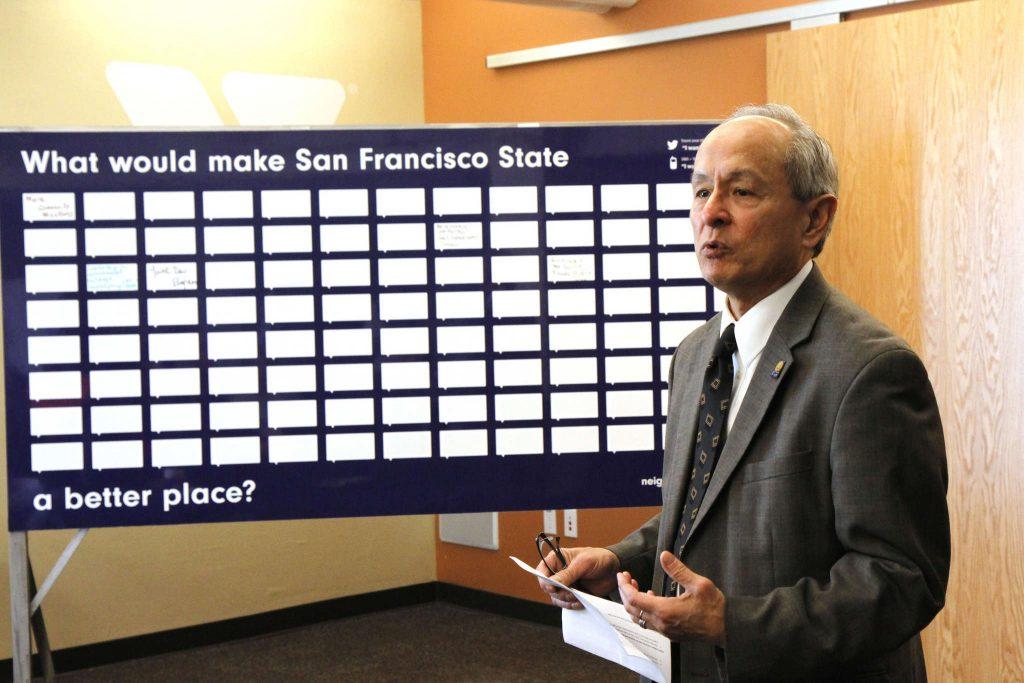 “Before any determination is made about what our presence is or will be, it is critical that we understand their needs and aspirations so that whatever we do is motivated by their input,” Wong said in an e-mail.

Wong announced plans to develop a campus extension at the Hunters Point Shipyard last fall. SF State officials are working closely with Lennar Urban, a development company that plans to build more than 10,000 new residences in the area, with at least 3,000 of them expected to be affordable housing, according to their website.

At the meeting, University officials invited members of the community to write their ideas on a whiteboard that read “What would make SFSU a better place?”

Tachelle Herron-Lane, a student of SF State’s Graduate College of Education and a long-time Bayview resident, contributed a list of suggestions, including free transportation, free 24 hour library access and set classes upon registration.

“I was born and raised in Bayview,” Herron-Lane said. “It (a Hunters Point campus) would mean closer access to college for people who live here because transportation and commuting, it’s a little difficult now in the city.”

The six mile commute from the heart of the Bayview can take as much as thirty minutes by car and over an hour by public transportation, depending on starting location and traffic conditions, according to Google Maps.

Prior to the meeting, University officials launched an online campaign on Neighborland, a digital platform for open discussion, to ask the community how SF State can help improve the neighborhood. Users responded with calls for healthier food options at the Bayview Hunters Point campus and general clean up of the area.

District 10 Supervisor Malia Cohen said she was excited to watch current Bayview sixth graders begin to take college classes at the future SF State campus when they’re seniors in high school. The University will offer high school students the opportunity to take courses at the new extension and work toward their degree before graduating.

“I want State here,” Cohen said. “Being able to start taking classes at SF State that would accelerate their ability to get their four-year degree in three years, which would of course be a huge cost-saver for families.”

SF State senior Anthony Amaro works at the 100 Percent College Prep Institute in the Bayview neighborhood. The organization provides students in low-income communities with the programs they need to graduate high school and get ready for college.

“I think a Bayview campus is necessary,” Amaro said. “The youth that I work with are interested.”

Amaro suggested the possibility of an ethnic recruitment and retention center would be valuable to the future Bayview campus.

“We can provide statistics with not only how well we are recruiting students, but also how we would retain students for a long-standing education,” Amaro said. “I feel that would be extremely beneficial and you could really sell that to a student, saying ‘not only will you be able to get in, you will be able to stay.'”

Wong and Cohen continuously stressed the role and importance of community input in developing the project throughout the meeting.

“Our soul, our DNA, lives and breathes in the community,” Wong said after the meeting. “Everyone in this room has some connection to SF State. We’re sitting on top of a volcano of energy and activity.”