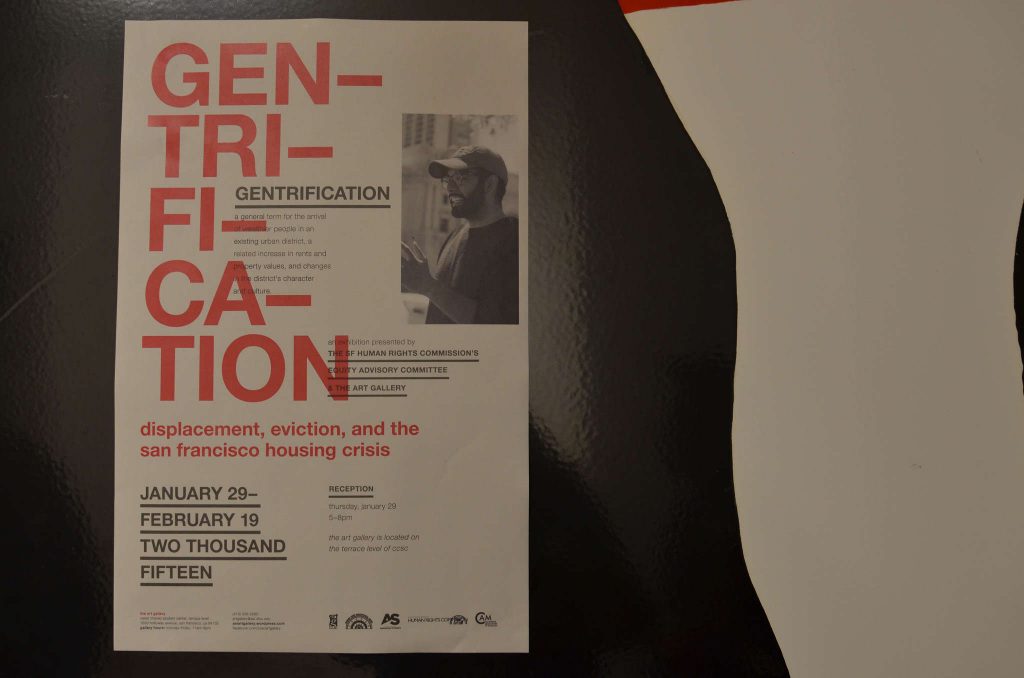 A poster advertising the "Gentrification: Displacement, Eviction, and the San Francisco Housing Crisis" exhibit at the ASI Art Gallery in the Cesar Chavez Student Center at SF State on Thursday, Jan. 29.

Associated Students is now featuring Gentrification: Displacement, Eviction, and the San Francisco Housing Crisis, an art exhibit that will be displayed free in the ASI Art Gallery in the Cesar Chavez Student Center until Thursday, Feb. 19.

Gentrification is a general term for the arrival of wealthier people in an existing urban district that can lead to a related increase in rents and property values, as well as changes in the district’s character and culture.

Because of the rent increases in the city, many people including San Francisco natives have been forced out of their homes by property owners hoping to make a bigger profit.

A subgroup for the Equity Advisory Committee of the San Francisco Human Rights Commission managed the efforts behind the exhibit. They chose to cover the topic of gentrification, displacement and the lack of affordable housing in the city and interviewed 10 people for the project.

[/media-credit] People attend the opening of the “Gentrification: Displacement, Eviction, and the San Francisco Housing Crisis” exhibit at the ASI Art Gallery in the Cesar Chavez Student Center at SF State on Thursday, Jan. 29.

“Family does not run deep here,” EAC member Paul Day said about situations in which people were kicked out of their homes by their own relatives. “It’s unfortunate, but the all mighty dollar dictates a lot.”

The committee embarked on a one-year project reaching out to San Francisco citizens who have been personally involved with the negative effects of gentrification. The result was an art installation storytelling the experiences of 10 people living amid displacement, eviction and the city’s current housing crisis.

Jennifer Cust is a member of the EAC’s Housing Subcommittee and is also involved with Eviction Free SF and the SF Tenants Union. She explained that San Francisco has many resources for tenants rights and housing, but their subcommittee wanted to explore a different side of the issue by humanizing it and placing a face to the people involved.

“We didn’t want to reinvent the wheel,” Cust said. “There’s already such great work going on. We wanted to kind of leave it up to the people who are dealing with the housing crisis to give input on what is actually happening.”

The committee found people to interview through outreach and attending community meetings.

“This is our way of kind of continuing the dialogue and really adapting to a human level,” Day said. “People see numbers and gasp, but who are these people? They’re individuals who are friends and family and have been kicked out of the city they’ve come to love.”

SF State alumna Angela Jenkins is a member of the African-American Out-Migration committee of the Human Rights Commission and was one of the 10 people interviewed for the project. Though she has not personally been evicted or displaced, Jenkins said she deals with the fear of being evicted every day because she is a black woman living in a predominantly wealthy neighborhood in San Francisco.

[/media-credit] Jonathan Wujcik reads information about the “Gentrification: Displacement, Eviction, and the San Francisco Housing Crisis” exhibit during its opening at the ASI Art Gallery in the Cesar Chavez Student Center at SF State on Thursday, Jan. 29.

“I’ve survived,” she said. “I find it a daily struggle that I’m kind of not wanted in the city. If I’m not wealthy, I’m not wanted here.”

According to SF State alumnus Rick Hauptman, who is also a part of the EAC, about five or six of the people interviewed have been evicted or continue to face the threat of being evicted.

“From elderly people to minority people to woman and others, it’s effecting all populations,” he said. “This gives the face to the situation as it’s happening in San Francisco.”

Through the art installation, which includes numbers on evictions in San Francisco and quotes and photographs from the people who have struggled through the crisis, the committee hopes to shed awareness on the subject.