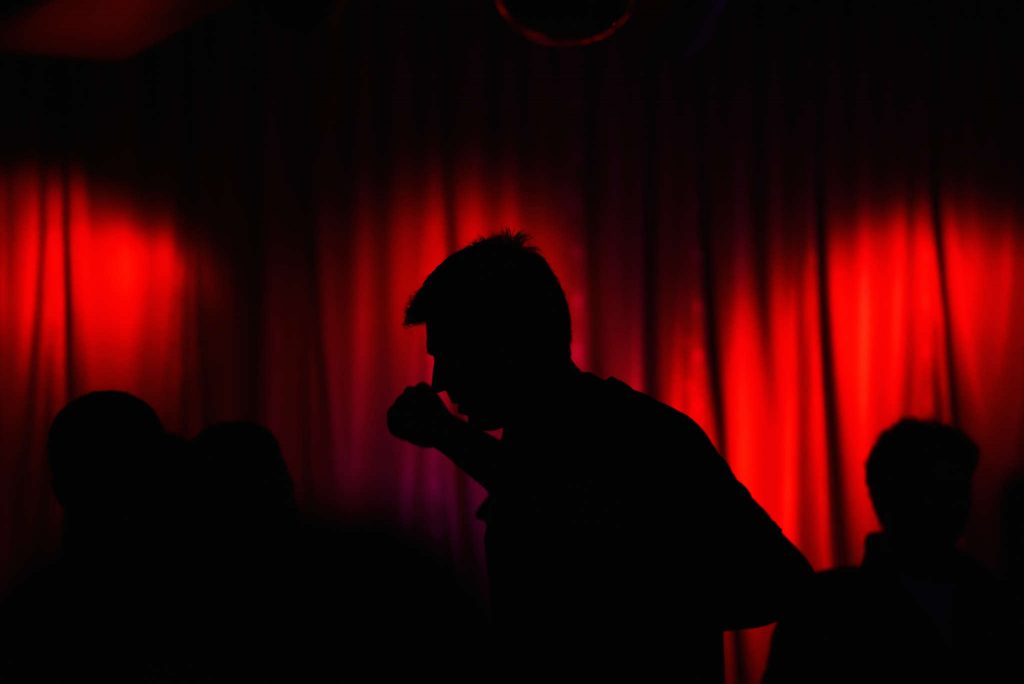 In the dimly lit bar, couples secluded themselves into tables nestled against the wall while others crowded the dance floor, eagerly awaiting the curtain to rise on stage.

“Residency means your band has that night every single month, and you are the people pretty much managing that venue,” Gomez said. “You get to choose who opens up and you’re in control of the turn out of people that are going to come, it’s kind of shifting the power of the venue over to the band.”

Miss Lightning played seven original songs their first night of residency, all of which they wrote themselves. The band also performed a few cover tunes, including Aretha Franklin’s “Chain of Fools.”  With Gomez front and center, Linures and Honda by her side, the group bellowed out harmonies as beers were cheered and feet hit the dance floor.

Gomez, the lead vocalist and keyboard player, is a junior studying communications and music. At 21 years old, Gomez has already played in four bands and has worked on other musical side projects.

She found her musical talents at a young age, performing in musicals and eventually finding her way past the auditions of American Idol on FOX. After high school, Gomez headed to San Francisco to continue her journey.

With Gomez as the singer, Robbie Hammett on the drums, Patrick Mahon on bass, Renato Linures and Cameron Honda on guitar and vocals, the group formed Miss Lightning in September 2014.

“We started jamming in the second bedroom of my apartment, then we got real,” Hammett said. “Then we brought on Dominique and we just started moving from there, ”

Miss Lightning created a genre of their own from that point on, unique to their individual styles as artists.

“I would go dark-soul-rock,” Linures said of her musical approach, a style Hammett and Mahon also agreed was a type of “throw-down funk”.

When the band was asked to play at the Ocean Beach Music & Art Festival in October 2014, they were still working on their image and had not come up with a band name at the time.

“We didn’t come up with the name Miss Lightning,” Gomez said with a laugh. “It was sort of bestowed upon us.” An audience member said that he thought they should be called Miss Lightning because of their lead singer’s bright purple hair and their original song “Blue Miss Lightning”.

With their new identity, Miss Lightning began to look for gigs around the city. With a following of SF State students, the band has made their way into some well-known bars like Neck of the Woods and Hotel Utah, with a crowd in tow. After playing their first gig at the Boom Boom Room, they were asked to take a residency spot every first Wednesday of the month.

The band said that accepting their first residency was not where Miss Lightning ends, but rather they hope to expand their fan base and continue to find gigs at any place that will give them a stage.

“We have enough songs for our album, we just don’t have a confident recording of our music, so that’s the next step,” Gomez said. “We’re trying to get like at least three gigs a month, we’re at like two.”

After the band stepped off stage, they were rushed by friends and fans that are passionate about their music.

“Dominique has been my best friend since I moved up to San Francisco,” Alex Harnly, a friend of Gomez’s said. “She has the personality. I pushed her to make her music, her vocals dominate everything.”

As the night came to an end and audience members began to exit, the band gathered to talk to their friends about their performance. “The crowd was great,” Gomez said. “I would say it got more packed in the end of it, it is a Wednesday night.”

Miss Lightning will perform at the Boom Boom Room the first Wednesday of every month for $5 at the door.