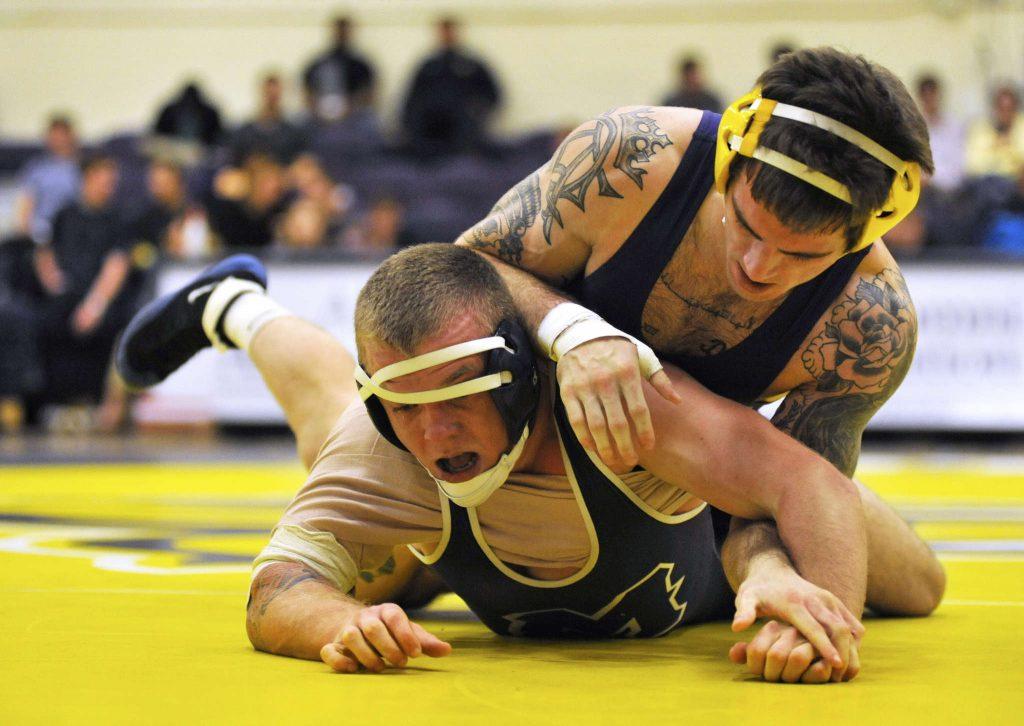 Menlo Oaks' player Tyler Thomas wrestles with SF State's Alex Abono (and his own headgear) in a match on Thursday, Feb. 12, 2014.

The Gators wrestling squad capped an emotionally charged senior night by beating rival Menlo College in spectacular fashion on Thursday, pulling out a 22-16 victory decided by the final match of the night.

Sophomore Calvin Nichols carried the mental burden of a 16-16 team score into his 174-pound bout that would determine the outcome of the entire meet.

“I knew it would come down to me as soon as I saw that I would be the last match of the night,” Nichols said. “I just tried to not think about the team score and wrestle my match.”

After giving up an early takedown in the first period and falling into a 2-1 hole, Nichols outpaced his opponent in the second, securing a fall just seconds before the end of the round.

“I’m trying to work on not starting out slow,” Nichols said. “I got comfortable out there and I wrestle better when I’m like that.”

“There was lots of pressure on Calvin, its a big rivalry meet,” Jensen said. “We knew that it would be tight, we always wrestle them tough. It was a good way to end the season.”

Other winners for the Gators were Jordan Gurrola at 133 pounds, Alex Abono at 157 pounds, Nate Lopez at 197 pounds, and heavyweight Sam Alnassiri, who won a grueling 11 minute match that ended after triple overtime.

“I’m really used to going into overtime,” Alnassiri said. “My last ten or so matches have gone into overtime. He was a familiar opponent that I’ve won and lost to, so it felt good to beat him.”

With the win SF State improves to a 9-5 record as a squad for the season.

Of the Gators’ four seniors that were recognized before the match, only Vicente Aboytes took to the mat, wrestling at 165 pounds.

Jesse Campos, Daniel Flores and Andrew Reggididn’t compete, but rarely contained themselves to theirseats as they watched the intenseback-and-forth dual meet.

“Even though I didn’t wrestle it was a great way to go out as a Gator,” Reggi said. “Calvin got the pin and that was awesome. Now we just have to focus on Regionals and qualifying a lot of guys for Nationals.”