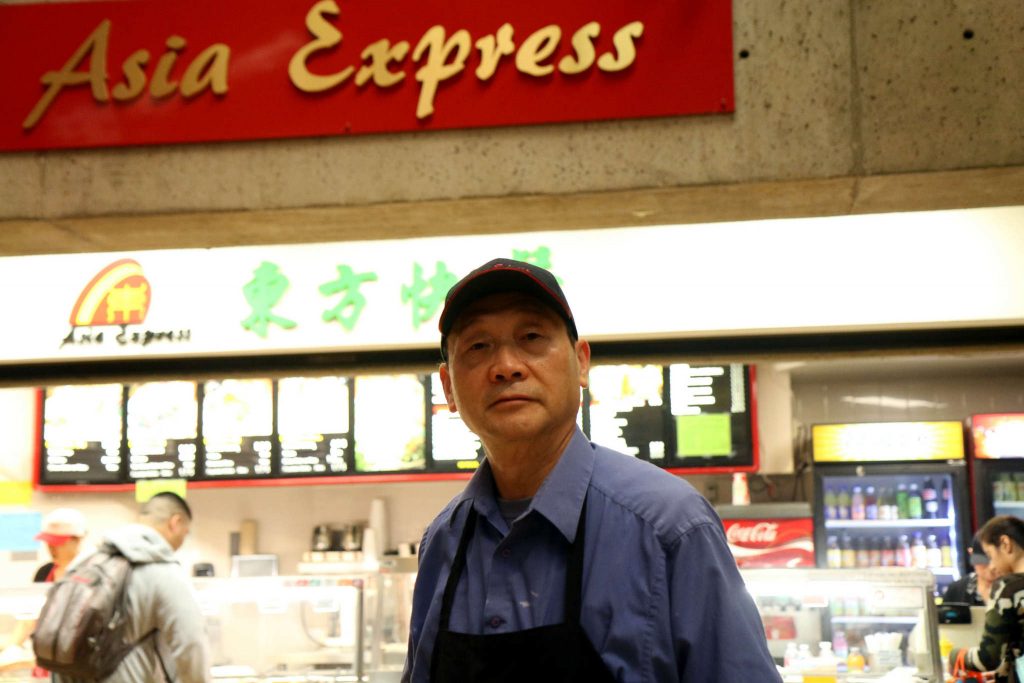 As far back as he can remember Felix Meng has worked alongside his parents at their restaurant, Asia Express, in the lower level of the Cesar Chavez Student Center at SF State. He grew up in the building and recalls starting out as a cashier in the second grade.

After 18 years, Felix balances being a full-time student at UC Berkeley, working 30 hours at his job and an putting in an additional 20 hours on weekends at his parents’ restaurant to help keep his family from going under financially. A series of highs and lows have left the Mengs struggling to manage their finances and worried for the future, which could be determined at University Corporation’s next meeting Feb. 19.

When Frank and Shally Meng opened Asia Express in 1997, it was the only Asian vendor in the student center and the Mengs were told they would retain exclusivity by CCSC officials, according to Felix. As the years passed, more Asian cuisine vendors, like Tuk-Tuk Thai and Quickly, were invited to do business at SF State, which he said negatively impacted the Mengs’ revenue.

“In the beginning we were the only Chinese food restaurant, only Asian food restaurant on campus actually,” Felix said. “It went from one Asian place to five which was horrible for us economically.”

The family paid over $320,000 for a complete remodel in 2005 to remedy an unsafe kitchen setup that had been in place before they opened shop, Felix said, and CCSC members extended their sublease renewal to 16 years, promising the Mengs would make that money back.

“This was literally our blood and sweat,” Felix said. “This was our only source of income. It was a huge investment on our end and we expected to make that back over the years.”

According to Felix, his father told Corpus he would consider selling if it meant regaining money lost in the remodel. Within a week, Corpus brought forth a potential buyer: Panda Express.

“We never actually made the first move to find Panda Express, it was the student center business office that did that,” Felix said. “Before (Corpus) had even reached out to my parents he had already been talking to Panda Express.”

In the weeks that followed, a Panda Express entourage visited the Mengs’ establishment by Corpus’ invitation, a move that ruined the family’s business, according to Felix. Employees who figured their jobs were threatened abandoned ship, which left the owners, both in their 60s, working more than 16 hours a day.

Realizing a deal with Panda Express might be their only way out, the Mengs started negotiating with the company and eventually signed a letter of intent, which the CCSC board knew about, according to Felix.

Amidst the Mengs’ talks with Panda Express, CCSC’s management of the student center was set to expire at the end of June 2014 and University administration had decided to end the deal with CCSC and give management of the building to UCorp. Because vendors held subleases under the master lease between CCSC and the University, their agreements would also fold June 30.

During the master lease transition to UCorp, CCSC officials told the Mengs they could not make any major changes and the deal with Panda Express fell into limbo, according to Felix.

UCorp took over the building and the existing vendors July 1, 2014. Some vendors had leases extending five to 10 years past the CCSC’s master lease expiration in 2014 and UCorp chose to honor the subleases already in existence.

“Legally, we could definitely end people’s leases tomorrow, give them notice today and say ‘your lease expires at the end of the month,‘” UCorp Executive Director Jason Porth said. “We’d be legally permitted to do so but I don’t think it would be justifiable under the promises that were made.”

The UCorp Retail and Commercial Services Committee met and voted to move forward with negotiations with Panda Express in early December but no promises were made to either party, Porth said.

Soon after the decision to explore the option of Panda Express as a new vendor on campus, members of Associated Students Inc. and sustainability groups voiced concern over welcoming a national chain to SF State.

ASI members said they wanted to support local businesses and presented UCorp with a resolution to slow negotiations with Panda Express while sustainability group Real Food Challenge created an online petition in an attempt to convince the campus to cut ties with the company.

The pushback resulted in the retail and commercial services committee drafting a recommendation Feb. 12 for the UCorp board to release request for proposals, which invites potential vendors to bid on a lease agreement.

“Hopefully we will get a lot of businesses that reply to the RFP and send in their credentials,” UCorp student representative Sarah Pishny said.

The recommendation will go to the UCorp board and likely be adopted Feb. 19, Porth said, and an RFP will be released soon after. Any company can respond to the RFP and UCorp will evaluate each proposal to garner which candidate is the best fit for the campus.

“There are many factors that will go into this and to make sure that it is objective,” Porth said. “There will essentially be a rubric created that will say what percentage each factor is and then people will award points based on their perception of this. Some will be more objective like who’s offering the most money. Others will be more subjective like taste.”

Porth said UCorp is committed to recognizing students’ concerns over who can do business on campus, but will also take monetary offers into consideration since 85 percent of rent from vendors funds ASI programs.

Because the right to renew leases was granted to current vendors, UCorp must also reach an agreement with the Mengs once a potential vendor comes to terms with them, since they are entitled to the space, Porth said.

Remembering past RFP processes, Porth expects to see a handful of responses and hopes the campus community will provide UCorp with input. Felix said Panda Express will be among the potential candidates, but because the company has already sunk money into the deal during the past couple years, the offer to his family will change.

According to Felix, the Mengs hope to strike a deal during the spring and move on.

“This whole past year has been an up and down roller coaster,” Felix said. “People made a big deal supporting small businesses but they forgot about the small business here right now. My parents have just given up.”