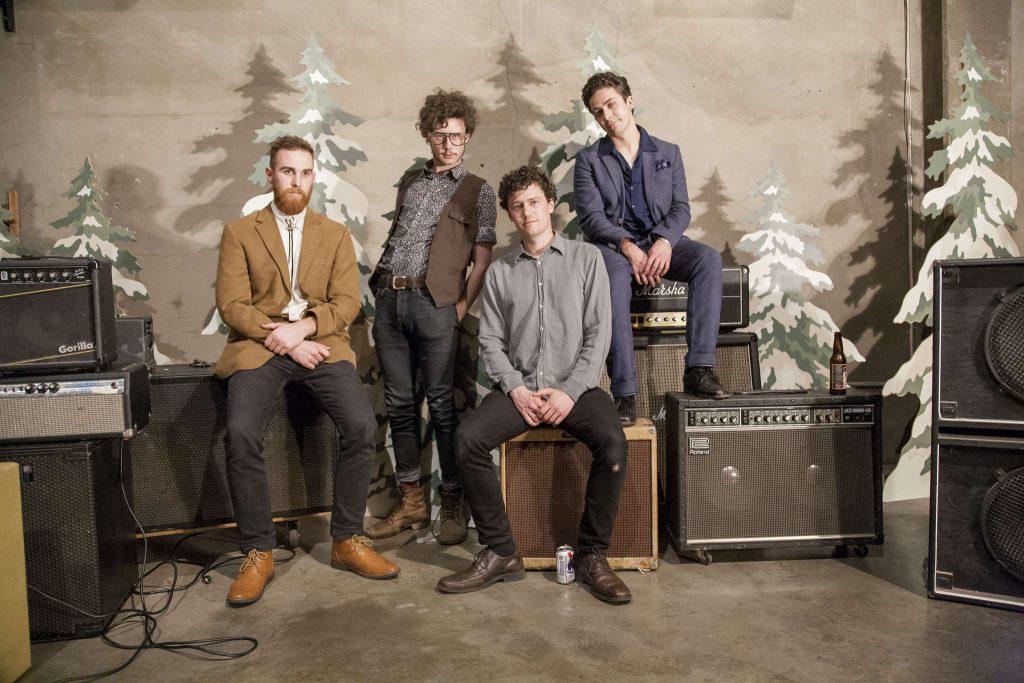 Sex, drugs and teenage rebellion collided to set the scene for Hungry Skinny’s first show in a former nun convent in the Haight-Ashbury district. The San Francisco band that has committed to rocking out, partying hard and having a good time since day one continues to serve up classic, reckless rock n’ roll four years later.

“Our first show we killed it,” bassist Sean Russo said. “We were like ‘we’re the best band in the world.’”

The band’s tastes are rooted in different genres– Russo and Riley grew up on old rock and grating, unruly punk while Thorpe and Vale cut their teeth on pop rock. According to Riley, raw emotion tacks onto musical technicality to form their head-banging, finger-snapping sound.

“You’ve got the sloppy emotional stuff coming from Sean and I, mixed with the clear and concise method of expression coming from Ty and Remy,” Riley said. “Those two things meet and somewhere in the middle is Hungry Skinny.”

The band’s beginning reaches back to a chance meeting when Riley, who had been hitchhiking on his way to backpack in Marin County, was offered a lift by drummer Thorpe. The two got to talking about music and decided to meet up to play after realizing they both lived in the city.

“I had my thumb out just feeling like a big-ole cliche, and then this beat up old Toyota 4Runner comes down the road,” Riley said. “I walked up to the car and Ty is just sitting there with this beard– this guy is ostensibly 30 years old– and he’s like ‘what’s going on man?’”

Soon after Riley returned from his North Bay excursion, he joined Thorpe and other friends for a jam session. The others they could do without, but the two soon-to-be Hungry Skinny members hit it off immediately.

“We started jamming to some songs I had on a record that I had just made on my four-track at home,” Riley said. “I showed him one song in particular, ‘The Church of Your Choice’ and that’s when he was like, ‘okay I get it, and we’re going to do this.’”

The singer had always planned on teaming up with Russo again, and he soon joined the mix. Soon after, Thorpe reached out to his old bandmate, Vale, in need of an amp. One thing led to another and the foursome came together to form Hungry Skinny.

In the beginning, the band reached out to friends to populate their shows, but their fan base has since grown to include people they don’t know, which they said feels really good.

“It’s so fucking magical to know that your fan base is no one who you personally asked to come out to the show,” Riley said. “Somebody saw Hungry Skinny was coming out and said ‘I like one of those songs so much that I can tolerate the other ones.’ Whatever it is man, I see people I don’t recognize and that is ultimate validation.”

Some of their most memorable shows include a stint at Slim’s with Mickey Avalon, the Chapel with Jessica Hernandez, the Deltas and the Tropics and Cafe du Nord with Black Cobra Vipers that doubled as a party for Sean’s 21st birthday.

“They let him drink at midnight, like the stroke of midnight hit when we were on stage and then they served him two drinks,” Vale said.

The band released a full-length music video for their song “Hot Dang” in January, which Riley said is a perfect representation of their style. Five EP’s and several singles comprise Hungry Skinny’s current repertoire, and they plan to drop a full album by next summer.

These days, the guys meet five or six times a week in their Pabst Blue Ribbon beer can-lined band cave to practice and plan for their upcoming tour and subsequent album, in which they said they are putting their best foot forward.

“The Doors’ first album, that’s an album,” Russo said. “If we can’t make our first album that good then why the fuck are we releasing an album?”

“So if it’s not as good as the Doors’ first album we’re breaking up,” Vale joked.