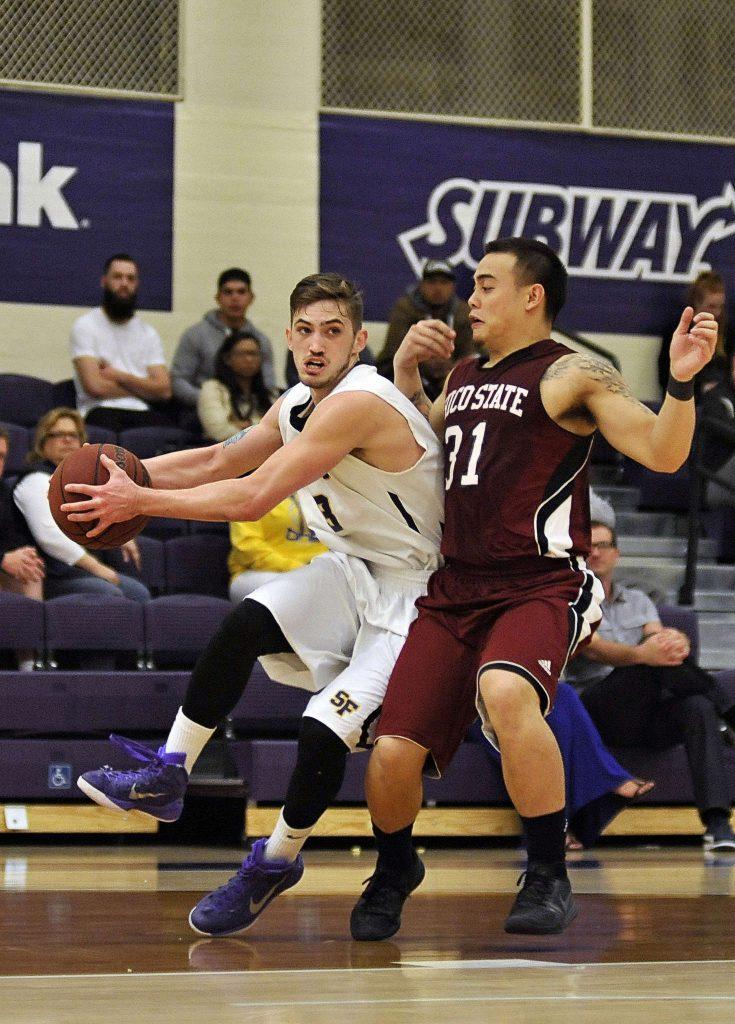 It was a back-and-forth Saturday night battle at The Swamp for SF State’s men’s basketball squad who fell short to Chico State Wildcats 65-57.

The night kicked off with the Gators recognizing seniors Bren Haley, Sam Colmenero and Udun Osakue, who walked on the court with loved ones on their last home game of their Gator career.

“Man, it’s disappointing,” Colmenero said. “You always want to win on your senior night, but we played really hard and you can’t be mad at that.”

The first half was a tug-a-war between both teams trying to outplay one another and maintain a close lead.

Chico State’s Jordan Semple drove into the paint for a slam dunk that made the crowd’s jaws drop, and sealed a 17-12 Chico State lead early in the first half. Semple, who was the main Wildcats force throughout the night, ended the game with 25 points, 12 rebounds and four steals.

Ten seconds before the buzzer rang to end the first half, SF State’s Haley made a deep shot from downtown to cut the Wildcats’ lead to one, 33-34. Haley would end his senior night with 15 points, seven assists and two steals.

“Definitely an emotional night,” Haley said after the game. “It was hard for me to keep my composure. I’m just really happy to be with a group of guys like this team. I really wanted to win and it’s really disappointing.”

Both teams started off slow in the second half and went four minutes without a basket. Gators’ Andre Jones hit a three pointer to end the four minutes of missed shots and back-and-forth turnovers, to give the team a 36-34 lead. Just as the Gators’ started to pick things up offensively, Chico State’s Corey Silverstrom makes a three in the corner to make it a 37-36 Wildcat lead.

“I’m very happy with how hard we played,” said head coach Paul Trevor. “They’re a very good basketball team. I’m disappointed we couldn’t get it done for them on senior night. That three they hit in the corner kind of broke our back, it was a tight game.”

The Gators were on fire from downtown, shooting 43 percent from behind the arc.

Gators’ forward Derrick Brown tied up the game 51-51 with a dunk, but Chico State’s Tanner Giddings would answer back with a dunk to make it 53-51 with a little over six minutes left in the game.

With over two minutes left in the game, Osakue made a shot from behind the arc to cut the Wildcats’ lead 55-54. From this point on, Chico State would maintain the lead and score the last 7 points of the game to secure their win.

“It’s tough losing on your senior night,” Osakue said. “Wish the ball bounced our way. We continued to play hard and that’s what I’m most proud about this team.”