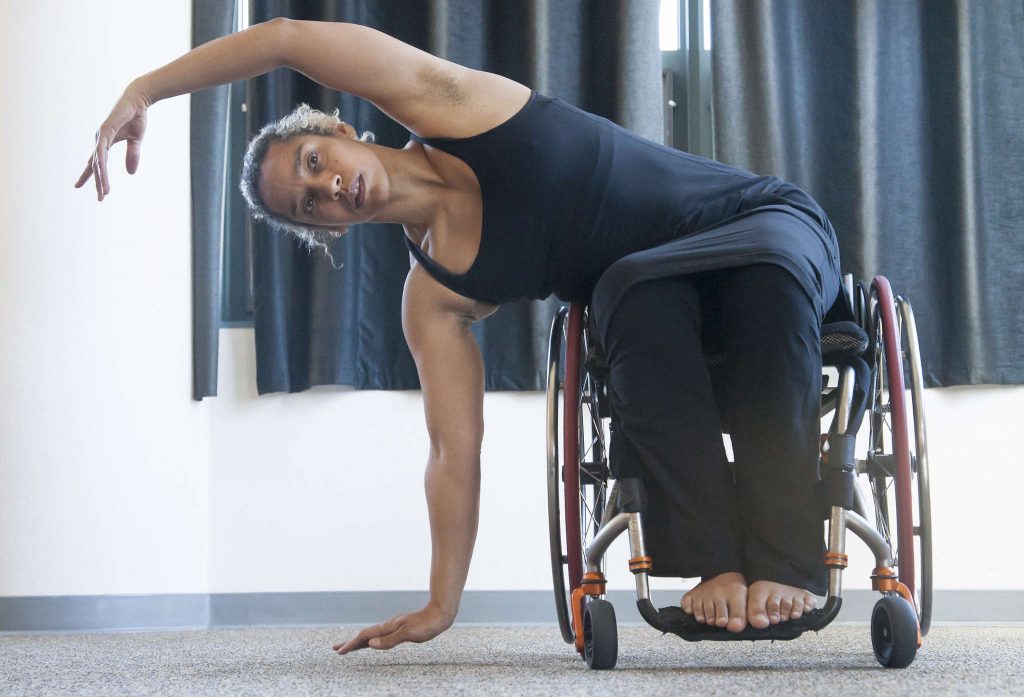 Dance artist Alice Sheppard goes through one of her dance moves with her wheelchair during a rehearsal before her performance in the Humanities building Tuesday Feb. 24. 2015. (Martin Bustamante / Xpress)

The dancer raised one arm and held it in the air to meet the pinch of sunlight creeping through the window. The slow piano music resonated out of the speakers, but it did not move her, she moved on her own terms. Her contoured muscles were redefined with each new line, using her wheelchair as a part of her emotional expression.

“The movement tells me how to feel,” Alice Sheppard said. “If you do the movement, emotion comes with it.”

Dance artist Alice Sheppard moves towards the floor while she rehearses her performance in the Humanities building Tuesday, Feb. 24. 2015. (Martin Bustamante / Xpress)

Dance artist Sheppard expresses motion using her wheelchair, challenging what people think about disability, dance and the body. Sheppard spoke on how she envisions dance at the 2015 Paul K. Longmore Institute on Disability lecture “Movement Is The Movement: Art, Activism, and Disability Aesthetics” in the Humanities building Tuesday.

“A dancer’s body is always subject to judgment, but when reviewers focus on what I physically can and cannot do, I am reminded of how much more there is to accomplish.” Sheppard said in her artist statement.

After she saw a performance renowned dancer Homer Avila, who had his leg amputated due to cancer, Sheppard was inspired to experience her body in a new way. Prior to her life as a dancer, Sheppard earned a doctorate in Medieval Studies from Cornell University and eventually earned tenure in English and Comparative Literature.

“It was a risk to give up that job security to do something completely new, but it was such an incredible and amazing feeling to find myself in dance,” Sheppard said.

Sheppard began her dance career with lessons with AXIS Dance Company in Oakland, a physically integrated repertory dance group that features distinguished choreographers and composers who showcase the talents of dancers with and without physical disabilities. Sheppard began dancing as an apprentice in 2006 until she was invited to perform as a member of the company in 2007.

The company’s artistic director, Judy Smith, recognized Sheppard’s interest in disability culture beyond the work she did with the dance group.

“She shows dedication and diligence in her craft,” Smith said. “She takes advantage of every opportunity to educate herself outside of the studio to incorporate that understanding into dance.”

Sheppard left AXIS in 2012 to do freelance performances and choreography work, giving her the opportunity to work in Atlanta, New York, Chicago and the United Kingdom.

“For the first four or five years, I didn’t know I had anything to say with dance,” Sheppard said. “Now, I recognize that I can express complex ideas and work through societal questions and problems in dance.”

Along with her work in the arts, Sheppard is involved in a number of non-profit projects. She has been on the Board of the Society for Disability Studies and is currently a board member of Brooklyn-based dance company called Urban Bush Women.

Dance artist Alice Sheppard goes through one of her dance moves with her wheelchair during a rehearsal before her performance in the Humanities building Tuesday Feb. 24. 2015. (Martin Bustamante / Xpress)

Sheppard is also on the advisory committee for SF State’s Paul K. Longmore Institute on Disability. The institute was established to continue the disability studies work of its founder, former SF State Professor Paul Longmore. The program’s assistant director, Emily Beitiks, has worked with Sheppard to promote the mission of the Paul K. Longmore Institute as it seeks to find new and empowering ways to view disability culture, according to Beitiks.

The disability arts and culture movement is a blend of creative expression including all forms of visual art, music, dance, performance and poetry that emerges from of a diverse community of disabled people.

“Our long-term goal is to combine academic study and community involvement to execute projects that open up a dialogue about the lives of disabled people,” Beitiks said. “We asked Alice to join the community because of her ties to the community and interests that align with our mission.”

The lecture featured a performance by Sheppard, after which she discussed how and why dance happens and how she envisions the future of art and culture within disability studies.

“Dance, for me, is the fullest expression that utilizes the movement potential of my body,” Sheppard said.