Professor uses power of words to educate and entertain 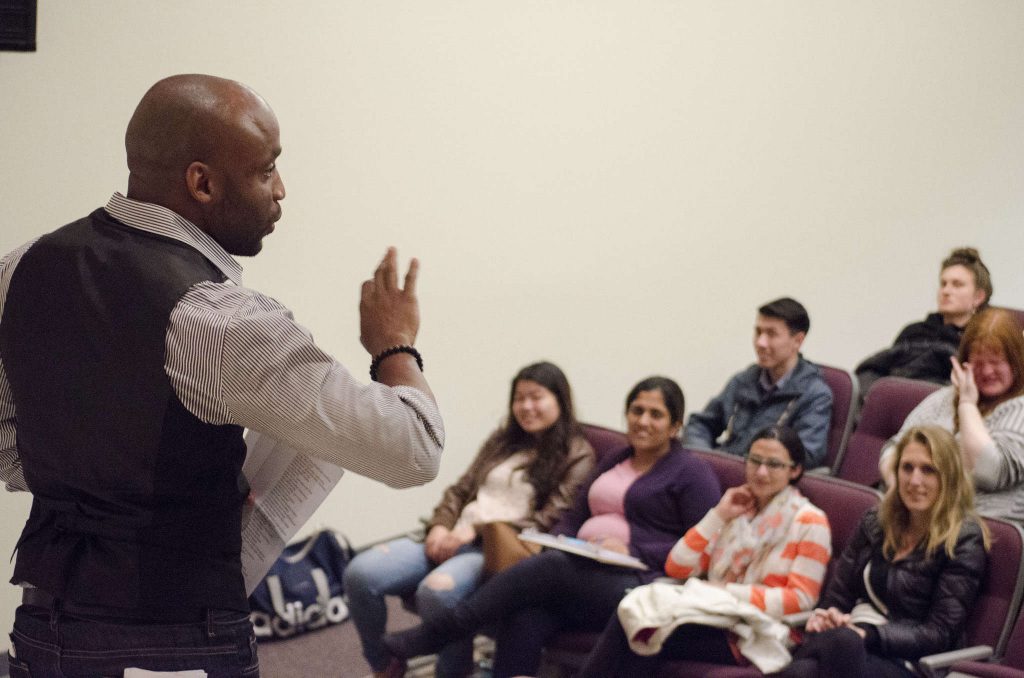 Javon Johnson, an assistant professor of Performance and Communication studies at SF State, recites poetry to a group of students in the Humanities Auditorium Friday, Feb. 26. (Hyunha Kim / Xpress)

Looking out into a sea of eyes staring back at him, Javon Johnson reeled in the audience’s attention with wit and laughter. After a few jokes that eased the crowd with humor, he dove into serious words of insight with a loud clear voice that captivated the entire auditorium.

Johnson, a professor of communications and poet Rudy Francisco shared their poetry and perspective as performance artists during a night of spoken word and conversation in the Humanities auditorium Feb. 26. The event engaged in conversation centered on process, politics, performance and the role of the artist in the contemporary moment.

“I think artists are poised, and even primed, to engage certain things from a perspective that people aren’t always ready to hear or didn’t see,” Johnson said. “Art plays an incredible role in moving us forward.”

Johnson is an acclaimed and seasoned poet who has performed on HBO’s Def Poetry Jam, BET’s lyric café and co-wrote narration for the 2004 basketball documentary “Crossover.” His 2013 performance of original poem “Cuz He’s Black” has over one million views.

Professor of communications Christina Sabee said she invited Johnson to perform as a new teacher to get involved with the campus community.

Sabee, who was part of the hiring committee that reviewed Johnson’s application said what made him stand out was his acknowledged performance background.

Johnson said he can’t remember a time when he was not a performer and accredits the skills and experience he has gained as a poet and performing artist to his securing a position as communications professor at SF State, where he has been teaching for two years. He said he views poetry and performing arts as forms that serve to educate and entertain.

“What’s powerful about performing art is the ability to connect to a full room,” Johnson said. “One of my favorite compliments is when someone says, ‘That’s my poem,’ that’s incredibly powerful, that it’s reached someone enough that they feel it’s a part of them too.”

Johnson recalled writing his first poem in high school for a girl he thought was pretty. He said she approached him and asked if he wrote poetry, and then told him that made him sexy.

Johnson allots a short amount of time per day to write as a force of habit. He cites these exercises as a common practice among famed poets like Maya Angelou and Octavia Butler.

During the question and answer portion of the event, Johnson was asked what advice he had for aspiring spoken word poets. He recommended reading a lot of everything and anything, writing out of habit and surrounding oneself with a community of artists for support and engendering creativity.

Francisco and Johnson are part of a five-piece poetry group called Fiveology, which includes Andrew Tyree, Prentice Powell and Shawn William. Johnson explained that writing poetry as a collective happens in parts. The process begins with one or two members of the group sowing a seed of creativity with a poem of their own. The others then nurture the idea until it branches out into five segments, with each member producing a piece to be assembled into a cohesive performance routine.

Francisco and Johnson have been close friends and team members since 2006 when they met on a road trip from San Diego to Las Vegas to do a show with a mutual friend.

“Javon is one of the biggest reasons why I am the writer I am today,” Francisco said. “Seeing him perform so often and seeing how well he engages with an audience and how he’s so honest with himself, I was like ‘Yo, that’s what I want to sound like one day.'”