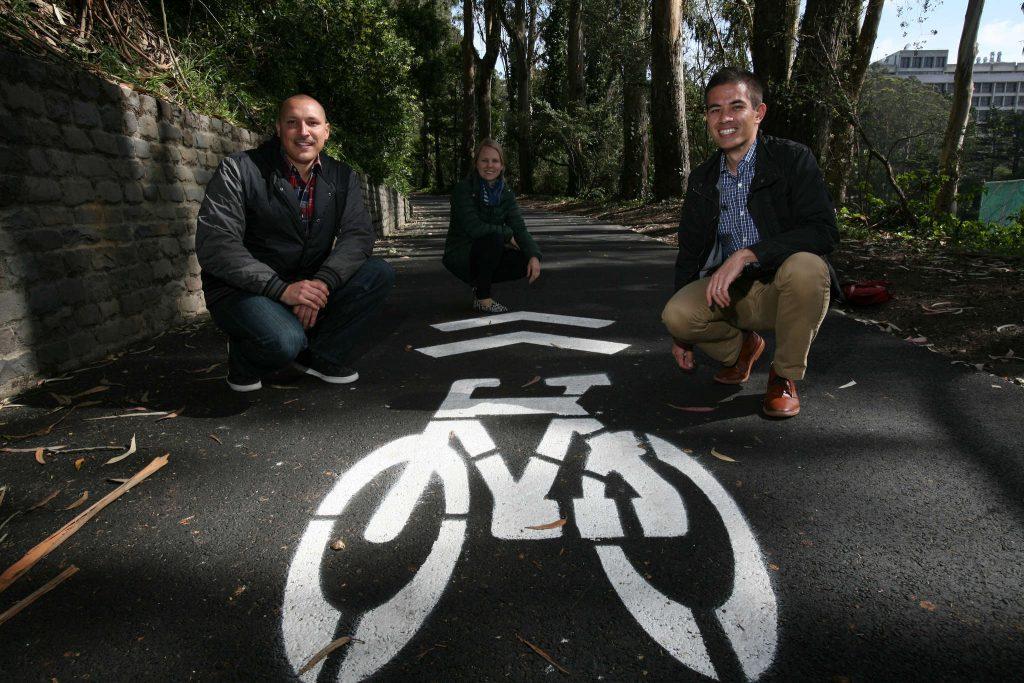 (From right) Nick Kordesch, Caitlin Steele, both are the Sustainability Coordinators at SF State, and Miguel Guerrero, the student coordinator, kneels down next to the newly painted bike path sign which runs along the east side of Cox stadium Monday, March 2. (Daniel Porter / Xpress)

SF State has been selected to host this summer’s California Higher Education Sustainability Conference, a platform that encourages innovative solutions to sustainability issues throughout colleges across the state.

The conference will highlight sustainable practices that reduce the environmental impact caused by college campuses. Proposals must be submitted by March 6 to be showcased at the conference July 20-24, according to Katie Maynard, the event manager and Sustainability Coordinator from UC Santa Barbara.

“The CHESC is a rare opportunity for students, staff and faculty from all four systems of higher education to share best practices and strategize around new policies and programs,” Maynard said. “In the past 13 years of this event, the conference has played a key role in the development of new system wide policies in the CSU and other higher education systems.”

“Can We Change Fast Enough?” is the theme of the conference and emphasizes the urgency in addressing current environmental issues like the heavy hit of California’s recent drought, Maynard said.

“We have already passed many of the early deadlines to avoid the worst effects of climate change and the stakes are getting higher every day,” Maynard said. “CHESC believes that we can change fast enough and encourages our speakers and attendees to help us brainstorm solutions to do so.”

The conference offers students the chance to present sustainability projects they have developed during the year.

Senior Daniel Feeney said he was excited about the chance to unveil his proposal for the first time at the conference.

“(The conference is) a fight for a better environment for students,” Feeney said. “A lot of us spend a great deal of time on campus and around the area, and more will in the future. If things don’t change, I think there could be serious livability and commuting problems in the future.”

Feeney will represent the Students for Planning and Urban Affairs at CHESC this year. His proposal addresses SF State’s transportation demands by examining why students choose to drive rather than utilize public transportation.

“It isn’t attractive because the services (including Muni, Bay Area Rapid Transit and SamTrans) underperform and are ultimately difficult and expensive for the riders,” Feeney said.

PUA’s suggestions include bus- and shuttle-only lanes, modernized pedestrian and bike networks and a pedestrian tunnel from campus to the Muni stop on 19th Avenue.

“If you think about it, the infrastructure and administrative processes that are in place are just not working,” Feeney said.

There currently are no incentives for students at SF State to utilize public transportation according to Feeney. PUA proposes a discounted monthly San Francisco Muni and BART pass for students as part of tuition.

“Better infrastructure and administrative processes leads to a better performance, which then leads to a better service, and from there we have happy riders,” Feeney said. “Happy riders will then hopefully lead to more riders, which in turn will reduce the amount of individuals driving to school.”

A CHESC speaker selection committee will review proposals and choose presenters based on criteria that include the ability to inspire actions and strategic value, translatability to all four systems of higher education in California, overall quality, innovation and originality. Decisions on speaker selection will be made by April 6.

“San Francisco and the Bay Area are on the leading edge of sustainability in many ways and we are excited to share that with conference attendees,” Kordesch said.

At the conference, Kordesch will lead a tour of SF State’s waste management system, which he said is one of the most advanced compost collection systems among California universities.

“CHESC hopes to provide practical examples of how campuses are already taking leadership roles in reducing their environmental impact and improving the health of their communities,” Maynard said.  “We also hope to create a space to further dialog among students, staff and faculty around where we need to be going in the future and what new actions need to be implemented to get there.”