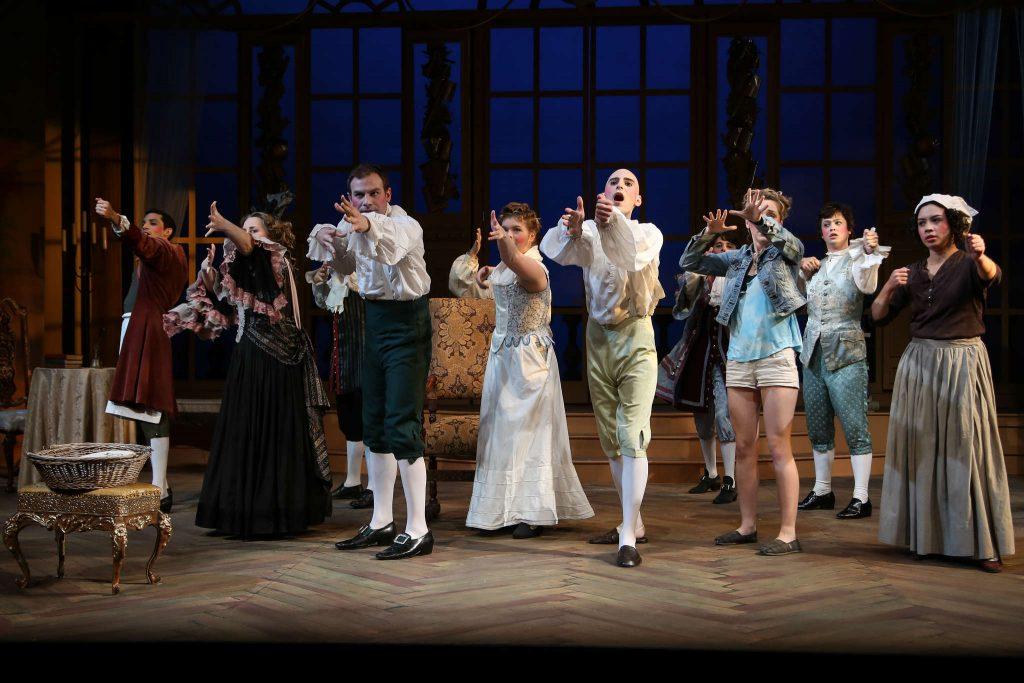 Dressed in immaculately curled wigs and dramatic 17th Century garb, the characters of French classic play “Learned Ladies” pit love and knowledge against each other in an over-the-top family feud.

SF State’s theater arts department debuted its spin on Moliere’s classic satire in the Little Theatre March 5. With a fast-paced whirlwind of verse and farce, the plot dials in on the engagement between young lovers Henriette and Clitandre. Henriette’s mother and sister pride themselves on their scholarly pursuits and insist that Henriette do the same by marrying Trissotin, a mediocre poet and pseudo-intellectual, rather than Clitandre.

Junior theatre major Lo Prentiss, 20, plays the role of Henriette’s sister Armande and described the play as fresh, lively, funny and immediate. The show’s themes are relevant and applicable to modern society as they examine the role of patriarchy versus matriarchy and societal expectations of each character, Prentiss said.

“What’s so artful about Moliere’s writing is that he doesn’t hit you over the head with any of these ideas,” Prentiss said. “If you take the time to analyze, you’ll definitely be able to see the themes behind all the language and comedy.”

Senior theatre arts major Rebecca Hodges, who performs as Belise, Henriette and Armande’s aunt, said Moliere’s underlying critique shines through with the use of satire.

“Moliere is ahead of his time in the fact that this could be considered a feminist piece,” Hodges said. “It speaks to the idea that women have a larger role in society than having a pot to stir or a nice lace to sew, but Moliere definitely accomplishes that in a humorous fashion.”

SF State alumna Delia MacDougall directed the play, calling from her experience performing “Learned Ladies” as the plucky servant girl Martine years ago at the American Conservatory Theater. Rather than exaggerate the comedic elements of the show as American renditions of Moliere sometimes do, MacDougall said she kept this production simple to focus on refined execution.

“I think there’s a tendency to overdo Moliere to play into the comedic aspect of it,” MacDougall said. “It is very humorous, but I don’t think people always trust that Moliere is such a great storyteller.”

Henriette’s mother and sister’s self-reveling attitudes toward learning contrast expectations of the time to be domestic, said Junior theatre major Megan Lipari, 20, who plays the role of Henriette.

Juxtaposition highlights the ridiculousness of extreme ideals, Lipari said. While Henriette and her father Chrysales are more visceral characters concerned with pleasures of the senses, Henriette’s mother Philaminte and sister Armande represent cerebral characters consumed by academic pursuits, according to Lipari. Moliere uses these character arcs to underscore a need for balance, she said.

The five-act play is set over the course of a single day. The color of each actor’s costume symbolizes the temperament of his or her character, according to Prentiss. Characters dressed in green represent the reasonable, those in red represent the passionate and those in blue represent the sensitive. In a rapid-fire series of events, characters come in and out of scenes, adding new information with each interaction to produce a domino effect of action, Prentiss said.

“(MacDougall) describes it as passing the baton in a marathon,” she said. “The show begins on a high note and the expectation is to carry that momentum and energy throughout the entire show.”

MacDougall said she worked with the actors to analyze the dialogue’s metered rhyme pattern and by sharing the couplets in iambic pentameter, the pace of the play keeps a constant heartbeat. Along with maintaining a certain rhythm, keeping the lines tight builds dynamic interactions between characters, she said.

“The cast’s level of dedication really shows through in their performance,” MacDougall said. “This is a fast-moving show driven by each character’s passion. You can see how the actors lean into their roles and use each other’s spark to make the audience believe in every moment.”