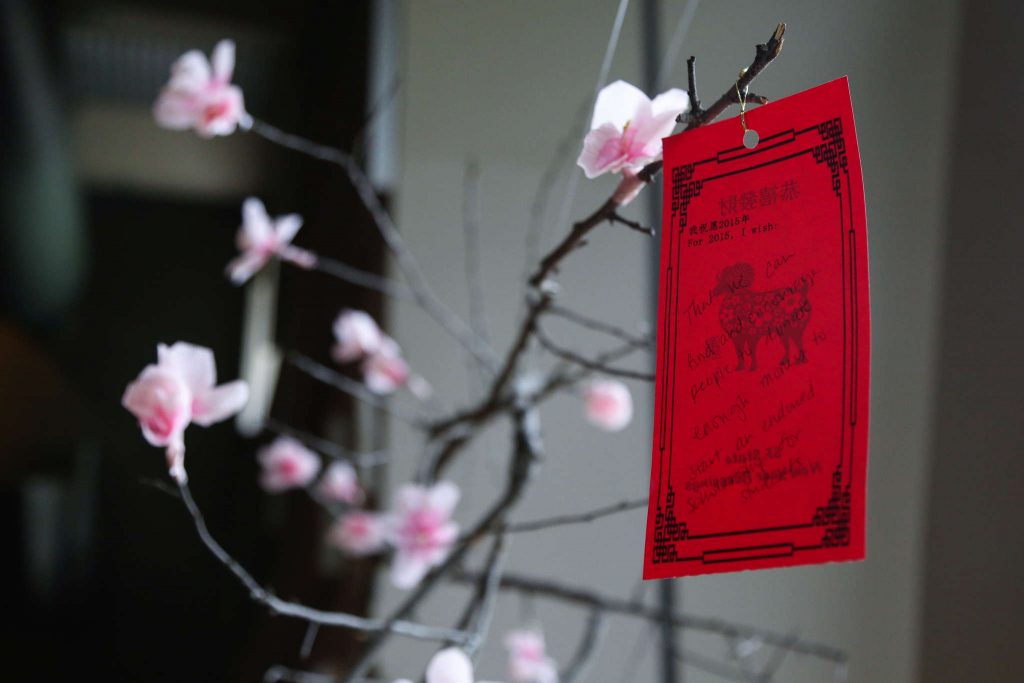 The fragrant smell of eggplant in garlic sauce and pork buns hung in the air, drifting through the red lanterns strung from the ceiling of Jack Adams Hall. Branches suspended by fishing wire sported delicate tissue paper cherry blossoms and a single written New Year’s wish: “That we can find and encourage people to donate enough money to start an endowed scholarship fund.”

The wish, hung by Mia Segura, program coordinator for SF State’s Chinese Flagship Program, was part of the impetus behind the Chinese New Year Celebration held on March 9. The annual festivity is intended to bring awareness to the program, while exposing students to the biggest Chinese festival of the year.

“It’s a good opportunity to expose students to Chinese culture and learning Chinese,” said Dr. Wen Chao Li, the director of strategic language initiative for the SF State Chinese program. “Every class (in the department) had to participate.”

Hosted by the SF State Chinese Flagship Program and cosponsored by the SF State Chinese Program and the Confucius Institute, the event highlighted performances by the students of Chinese classes from both SF State and City College of San Francisco. The performances entailed a mix of singing, Shaolin Gong Fu martial arts and dancing. Dumpling Kitchen, located in the Sunset District, catered the event.

“The performances were really endearing,” said Tea Jiang, an international relations and Chinese flagship double major who emceed the celebration. “It captured the spirit of the year of the ram really well.”

The Chinese flagship program is a domestic and international program launched in 2009 for undergraduate students seeking careers related to China and the Chinese-speaking world.

The grant-funded program is one of only nine in the U.S. that provide students – about half of whom are non-heritage speakers – with an immersion experience in Chinese language and culture. The program also requires students to spend a year in China participating in classes and an internship.

“By providing intensive language instruction, cultural training and overseas intensive language immersion opportunities, we work closely with our students to facilitate mastery and application of the language for long-term success,” said Erica Guzman, outreach coordinator for the flagship program.

Van Valkenburgh, who performed with her class in the celebration, said she hopes to use the Chinese she has learned at SF State to teach overseas. The flagship program, she said, provided her with the best option of doing so.

The New Year’s celebration furthered students’ application of language, as most of the dialogue and all of the entertainment performed by students was in Chinese.

Seguro said that the event provided a platform for students to show off the fruits of their labor and remind them that learning a new language is meant to be enjoyable.

“It’s just fun,” Seguro said. “Students work really hard in order to get to this level. This event is meant to celebrate them.”