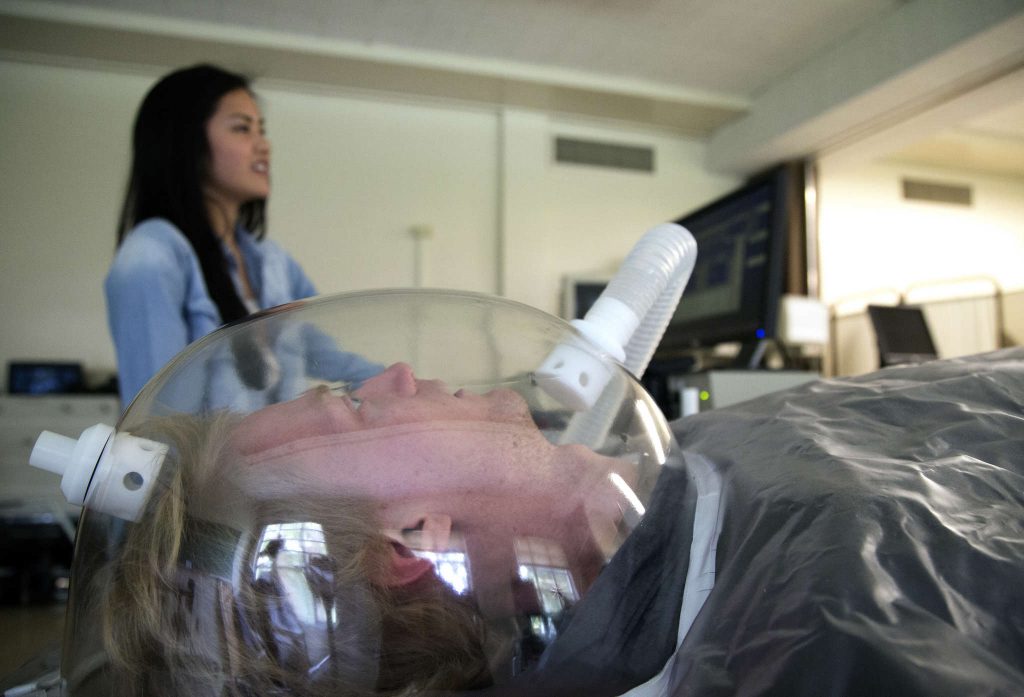 While most people consider dieting to be cutting out their favorite desserts or juice fasting with only fruit and vegetables, scientists are buzzing about the latest and possibly most extreme weight-loss regimen called cold diet, where one exposes themselves to below-freezing temperatures to shiver away the weight.

Good Morning America reporter Becky Worley published an investigative video segment last month exploring the practice of thermal dieting. To test the regiment, Worley stood in a chamber that blew cold air on her damp skin, sat in a tub filled with ice cubes and walked through the snow wearing nothing more than a T-shirt and running shorts.

The team at Good Morning America visited SF State professor of kinesiology Matt Lee on campus to quantify the results of Worley’s resting metabolic rate and estimate her caloric output while wearing a vest lined with ice packs.

The idea behind the diet plan relies on acute exposure to the cold that stimulates brown fat, which is stored and burned to maintain the body’s constant internal temperature, Worley said.

“I would be hesitant to recommend cold exposure as a method for weight loss,” Lee said. “This is all kind of new so there’s a lot of questions, experimentation that research has yet to answer. It’s no replacement for exercise by any means.”

In a 20-minute experiment, Worley burned 1.5 kilo calories per minute with the vest in comparison to the 1.4 kilo calories she burned without the vest, indicating about 7 to 8 percent rate of change, according to Lee’s readings. This estimate projects that she could burn about 18 calories per day while wearing the vest.

Scientists began studying brown fat in the1960s when researchers at the University of Ottawa sought to determine how small animals could survive harsh winters while hibernating.

Then in 2009, scientists from the Massachusetts Medical Society discovered evidence that activating brown fat could play a role in adult metabolism and weight loss.

University of California, Irvine science professor Wayne Hayes invented the Cold Shoulder ice vest that Worley wore in the video. Hayes said he was displeased with the way his product was portrayed because the reporter used the vest once, rather than over an extended period of time.

The vest is advertised to burn 500 calories per day. Hayes said he developed this estimate by conducting an informal clinical trial over the course of four weeks. In his experiment, Hayes documented his weight loss results for two weeks without wearing the vest, then two weeks with the vest, while keeping close track of his caloric intake.

During the weeks he wore the vest, Hayes lost one pound per week. He divided 3500 calories, or one pound of fat, by the seven days of the week he wore the vest, giving him an estimate of 500 calories burned per day. For best results, Hayes recommended wearing the vest twice a day for 60 to 90 minutes each session.

Hayes tested the Cold Shoulder on science colleague Nick Hamilton, who over a training period of 14 weeks used the product during the final two. Along with diet and exercise, Hamilton maintained a consistent percentage of body fat after losing 0.8 percent throughout the entire course of his training. Comparatively, the Cold Shoulder produced the loss of a full one percent of body fat during its implementation, Hamilton said.

Hamilton also tried other cold diet methods, such as cold exposure, which involved taking walks out in the cold and cold immersion in a bath full of iced water. After 50 days, Hamilton was able to fully immerse his body in the bath. However, he noted that neither freezing baths nor chilly walks were as convenient as wearing the Cold Shoulder.

“Think of it as another tool in your arsenal,” Hamilton said. “There are definitely benefits to constant exposure, but it’s a steady progression that works best in combination with exercise and good nutrition.”