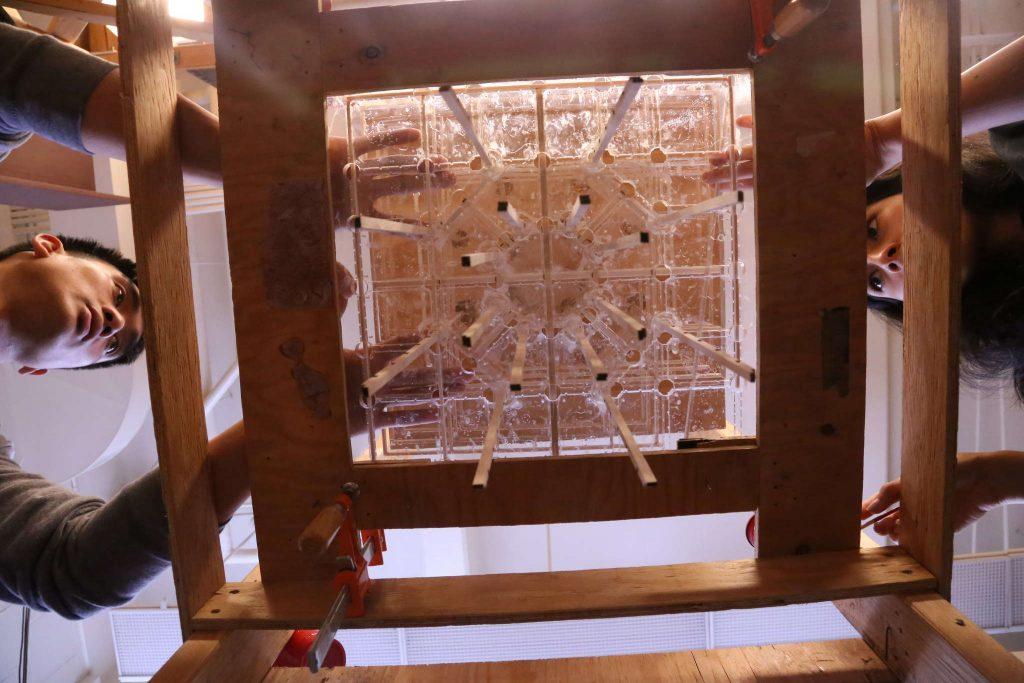 [dropcap]A [/dropcap] large crack rang out in the small classroom in the Science Building as the 5-foot-tall wooden tower toppled from seismic vibration. The students who made the structure moaned in unison as their first attempt to build an earthquake resistant tower failed.

The tower, built entirely from balsa wood and glue, is a senior project made by the SeismiGators, a group of civil engineering students who for over the past year have been researching and testing tower designs to see how they measure up against the force of an earthquake.

After their first tower failed during the seismic test, the team identified the mistakes and missed opportunities and have built a brand new tower.

“I really trust our structure,” Vasquez said. “I feel it will do really well.”

Teams at the competition will test the structural integrity of their model buildings on an earthquake simulator, which is a small platform that shakes horizontally in multiple directions. Thirty extra pounds of weight will be added to the structure to simulate the weight of people, furniture and other systems involved with a real building.

Project advisor and assistant professor of civil engineering Zhaoshuo Jiang is hopeful for the design but spotlights the entire process as a learning benefit to the students.

Before any adhesive is applied to the wood, the SeismiGators modeled and tested a rendering of the building in SAP2000, a structural and earthquake engineering software.

Different designs were tested and vetted until the group was happy with a final design, said Aimee Sylvia, who runs the group’s website. The finished product resulted from a process of distilling the group’s favorite designs to fit the rules of the competition.

Pieces were then drawn up in 3D-modeling software and a laser cutter on campus was used to cut the balsa wood, a lightweight wood also known as ochroma pyramidale that the competition rules required for the building material.

Fitting and gluing the pieces together was the most time-consuming part of the building process.

Teams of four people worked on the tower in two- hour shifts on days that worked best with their schedules. “Even though you want to take your day off or something, no,” Vasquez said. “You have to be here, you have to do this and put your hours into it.”

Through the countless hours of hard work, the students said they are proud of what they have accomplished.

“It’s difficult to describe, but it’s definitely a labor of love,” Sylvia said.