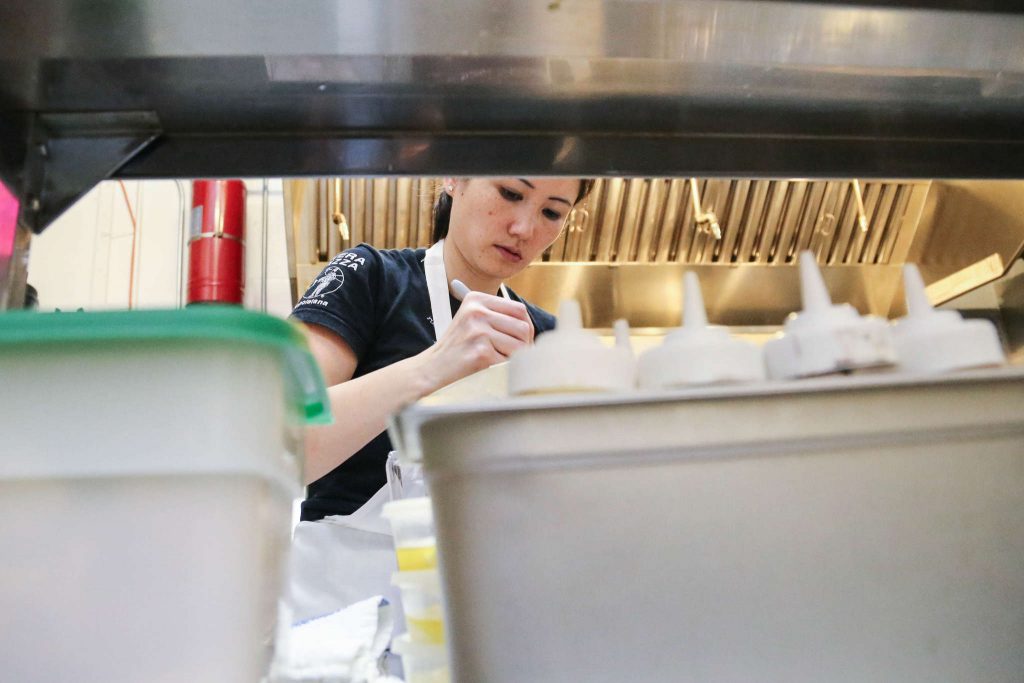 Owner of Mozzeria Melody Stein prepares ingredients for the dinner service were they serve pizza's cooked in a wood-burn oven and a variety of small dishes Wednesday, March 18. (Zhenga Sokolova / Xpress)

When the phone rings at Mozzeria, the Mission pizzeria owned by SF State alumna Melody Stein and her husband Russ, it doesn’t make any sound. Instead, strategically positioned lights, located above the front door and along the bar flash in color-coded pulses.

It’s one of the many ways technology has helped Melody and Russ become owners of the first deaf-owned restaurant in San Francisco. Yet Stein is quick to point out that they are Deaf, with a capital D.

“It’s an identity,” Stein said, typing the words onto her laptop. “Maybe parents of deaf babies will read (this). It’s my way of telling them for the first time it’s OK. They may be scared and don’t know what to do or how to raise them. That’s why I say I’m Deaf. I am OK.”

Stein was born in Hong Kong in 1973 to hearing parents and moved to the Bay Area when Stein was 7, so she and her brother, who is also Deaf, could attend the California School for the Deaf in Fremont. After graduation, Stein went to Gallaudet University for the Deaf and hard of hearing, where she met Russ and the couple moved to San Francisco in 1995. Three years later, Stein graduated from SF State, where she majored in hospitality management.

“Russ is from New York and is a big fan of NY pizza,” Stein said. “So I compromised with Neapolitan pizza. I traveled to Italy with my mom, (and) when we came back, I practiced pizza making at home. He loved it, and we started moving fast with the restaurant concept and business.”

While building Mozzeria, Russ acted as the general contractor and hired nearly all Deaf skilled laborers, including the electrician, plumber, furniture maker and hardwood floor installer.

“It’s been quite a journey,” Russ said. “Especially for us having to overcome barriers having to do with us being Deaf, (in addition to) the challenges in launching a restaurant. We all work hard to provide the best experience possible to our customers.”

Art displayed on the pizzeria’s walls was contracted by the Steins from Deaf artists, including one by a 16-year-old high school student. But the Steins didn’t just hire Deaf workers for the building of the restaurant. Every employee at Mozzeria is Deaf– many of whom have no experience in the restaurant industry before being hired by Stein.

“I want to pay it forward by working with the organizations and creating jobs for the Deaf so they know they can be useful, not having low self-esteem when others don’t want to hire them,” Stein said.

In the U.S., only 50 percent of civilians with hearing disabilities aged 18 to 64 were employed in 2014. In California, that number was slightly less at 47 percent, according to the Annual Disability Compendium.

Mozzeria’s employees communicate through sign language and message boards. A pad of paper and a pen are located on each of Mozzeria’s tables to ensure guests are able to communicate accurately with their server. Phone calls are routed through an app on Stein’s iPad, where a live video translator acts as an intermediary between the caller and Stein.

After opening the pizzeria in 2011, Stein found that some of the hearing patrons were insisting that the Steins put up a sign informing customers that they are Deaf. Stein steadfastly opposed.

“You come here for the food,” Stein said. “Sometimes they wrote awful reviews on Yelp because we were Deaf. It’s ignorance but now we are able to bridge the cultures and communities. The vast majority of our customers are hearing and they keep coming back because of the food.”

“All of the servers speaking sign language made for an intimate and unique dining experience,” wrote one reviewer on Yelp. “On top of that the food was delicious! The radicchio pizza is the best pizza I’ve ever eaten!”

Local success and press recognition ranging from the New York Times to Huffington Post translated into the purchase of a food truck trolley that allows the Steins to accept catering orders. They purchased the trolley in Florida and then drove it back to San Francisco, stopping at schools for the Deaf and offering students the chance to taste their pizza.

“Now, after the food truck tour, I see young kids looking up to us and (they) want to make pizzas one day.”