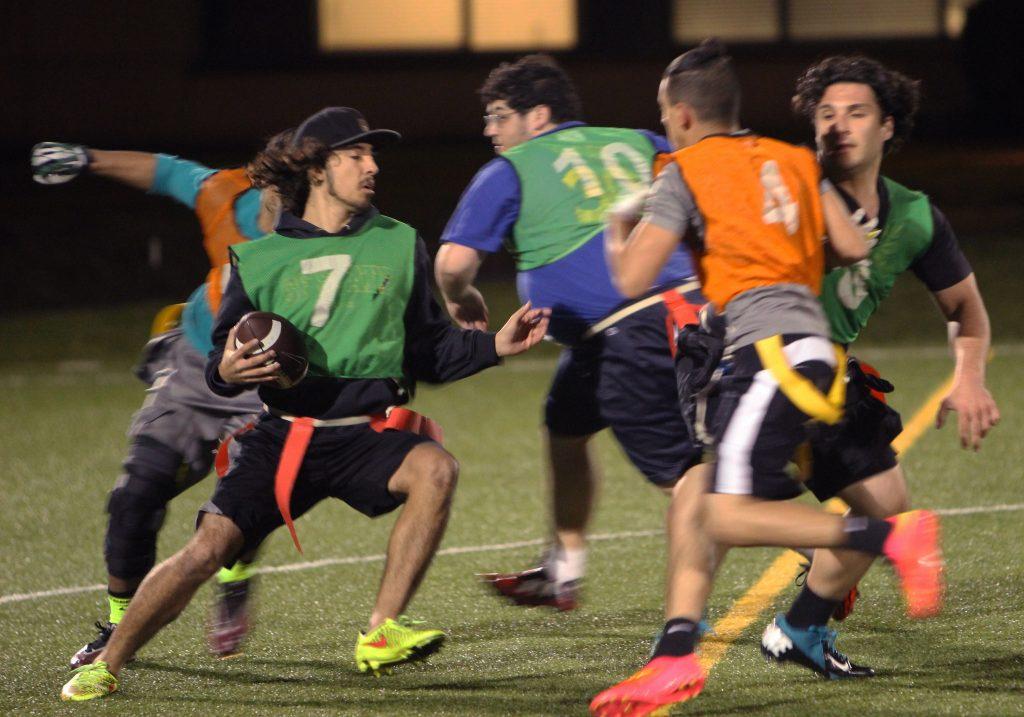 “We got a Peyton Manning over here,” said referee Dominik Lawrence, laughing as the player scrambled away from an imaginary mob of defenders. “Some people think this is like a tryout for the league.”

“It’s not uncommon to have guys get up in each other’s faces because of this stuff,” Enos said. “Everyone takes it pretty seriously, sometimes even a little too seriously.”

Flag football and soccer are the most recent additions to SF State’s six intramural sports that have been available to students since the West Campus Green was developed in the space behind the Humanities building in 2013. Student surveys following the field’s conception inspired the decision to implement both sports into the intramural program, and participation has increased every year since, according to Assistant Director of Campus Recreation Ryan Fetzer.

“The results of the survey were pretty overwhelmingly in favor of soccer and flag football,” Fetzer said. “Once we got all of the rules in place and agreed on all of that, it pretty much started running itself. The students who do the officiating and scorekeeping are all great at what they do.”

The intramural programs aim to provide a physical outlet for students and to foster leadership and teamwork as well, Fetzer said. Team captains are chosen at the beginning of each season for each team, and Fetzer relates the league’s rules to players through those leaders.

“It’s important to have fun first and foremost,” Fetzer said. “There is a great amount of leadership involved with these kinds of extracurricular activities, however. It’s great that the school was able to fund this field so that students have a place to do this.”

Teams sign up individually for the league through an online program called IM Links once they have assembled enough players to fill a roster. Fetzer said it is his job to put together the league’s schedule and hire and train student referees and scorekeepers.

Student player O’neal Stidum said the flag football league allows him to revisit the tight-knit team atmosphere of a sport with which he would have otherwise lost contact.

“It’s a great way to stay with the sport and it kind of reminds me of the old playing days,” Stidum said. “It’s just a bunch of people who share the love of the sport.”