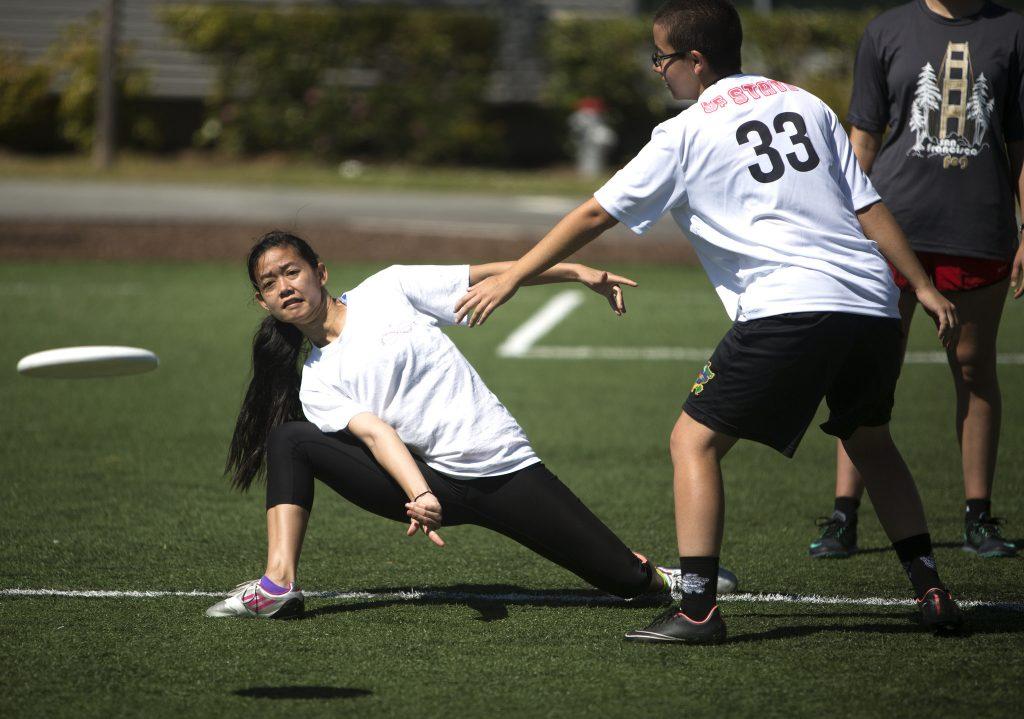 Two ultimate Frisbee teams occupied the artificial turf of the West Campus Green for the first time in SF State’s history on Friday.

As men’s team member Cooper Wright whipped a white disc towards an uninhabited plot of field, sending his teammate Jesse Saekow tearing after it, women’s captain Gianna Tesler led a series of back-and-forth drills on the other side of the field, critiquing the essential short throws of her fellow players.

“You want to float it up and let your teammate run underneath it,” Tesler shouted. “Make it easy for them to get to it.”

In its second year as a campus-recognized program, a recent crop of new players has not only given SF State’s ultimate Frisbee team more athletes that Lopez hopes to develop into talented players, but has also allowed the unit to separate into men’s and women’s squads. The sectional tournament April 18-19 will mark the first time the Gators have ever fielded a full seven-player women’s team, including during past years when SF State had ultimate Frisbee clubs that were eventually disbanded.

“We’ve never had enough women to branch off, so next weekend will be exciting,” said women’s captain Gianna Tesler. “Getting a lot of game time is important and I think it will be good to compete in an all-women tournament to see how we can do.”

For their first four tournaments of the season, the Gators played as a mixed-gender unit in an open format against opposing teams comprised mostly of all men. The separation of the men and women into two teams will improve the competitiveness of both squads, according to Lopez.

The squad has striven to add the disc-throwing precision characteristic of higher level Frisbee teams to its abundance of raw athletic talent. With less than two weeks until the sectional tournament in Livermore, the team has ramped up the intensity of its twice-a-week practices, according to Lopez.

“It’s really all about raising the Frisbee IQ’s of our guys and girls,” Lopez said. “We’ve seen a huge increase in participation between last year and this year with a lot of good athletes, and now it’s all about making them into better players.”

Tesler, along with men’s captain Graeme Brunst, co-founded SF State’s club in 2013 and manage the team by sign up for tournaments in the NorCal College Open Division. The pair said they enjoy sharing their years of experience with newer players.

“We try and introduce them to how the game looks at a higher level,” Brunst said. “Whether that be by watching videos on YouTube or by getting more practices in. A lot of people on this team have come a long way and we’re getting very close to being competitive with other schools who have ultimate ingrained into their culture.”