Boxer punches through adversity with passion 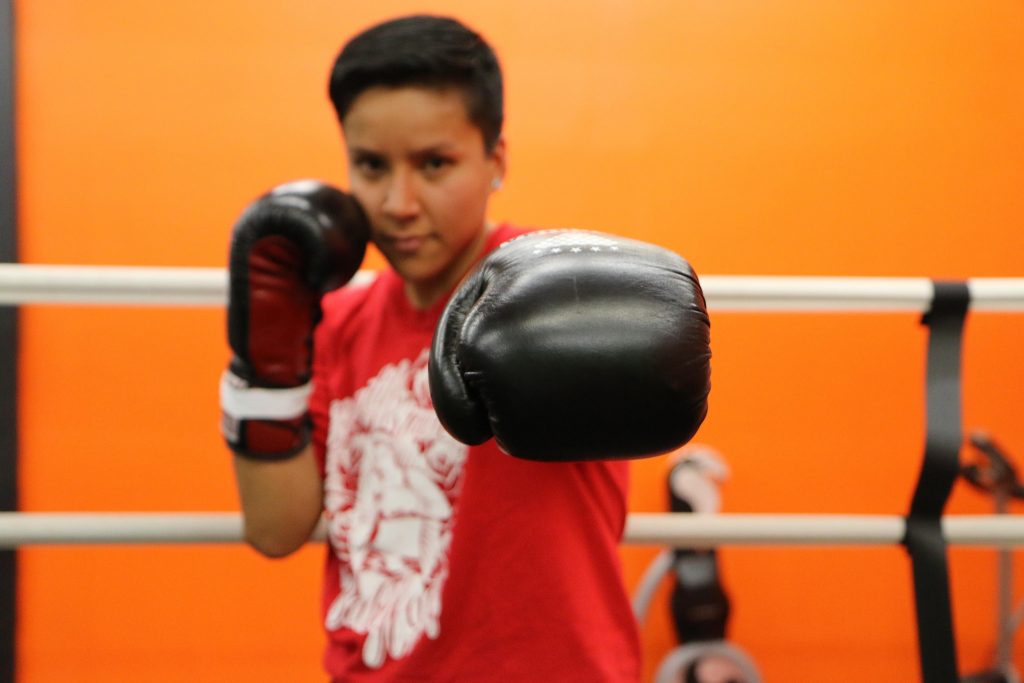 Sandra Magallon poses for a portrait at the Babyface Boxing Gym in the Pacifica on Tuesday April 6. (Marlene Sanchez / Xpress)

Feminist studies and sociology major Sandra Magallon said it only took a sparring match with a champion fighter and a resulting bloody nose for her to get hooked on boxing.

Magallon is an amateur boxer in the 118-pound division who trains at the BabyFace Gym in Pacifica. At 21, Magallon juggles two jobs, working 35 hours a week, and is a full-time student.

“I like it because I feel like it keeps me busy,” Magallon said. “Plus, you get to take all your frustration out on a bag or on a person but you don’t really feel bad (because) it’s okay to do it.”

She attended SF State during the spring semester before spring break but decided to transfer to the University of California, Santa Cruz to be closer to where she lives.

Her attraction to the sport began after a friend from De Anza College recommended she take up boxing last summer in order to keep busy. Magallon said she was not initially interested in the offer but decided to take up her friends invitation and visited the Ultimate Fighting Championship Gym in San Jose.

At the UFC Gym, Magallon said she anxiously waited a year for boxing sessions that never came. She said she felt as if she was never considered as a competitor by trainers and suspected it was because she is a woman.

“I didn’t feel like I was taken seriously,” she said. “Soon after, I realized I was the only woman in the gym who wanted more than cardio boxing. I finally got tired of waiting and I left.”

Magallon decided to pursue boxing at a different location and started training at Baby Face Gym in July 2014. It was on her second day at the gym that she sparred professional champion fighter Melissa McMorrow, a moment that Magallon said continues to be one of her favorite moments in the ring.

Magallon met the owner of Baby Face Gym, Blanca Gutierrez, who is well-known in the Bay Area boxing community for training, managing and promoting female fighters. Gutierrez’s most notable fighter is Martha “The Shadow” Salazar, who is currently the women’s World Boxing Council heavyweight champion.

Gutierrez said she was impressed that Magallon sought her gym out, but was skeptical of her as a boxer when she first met her, thinking she was just another athlete pretending to be a fighter. It was after she held up the red and blue pads for Magallon to punch and slip that Gutierrez said she saw the potential talent of the young fighter.

“She’s probably one of the best fighters I’ve ever trained,” Gutierrez said. “She does everything we tell her to do and a 100 percent more. She sticks to her program, she doesn’t eat a lot, she runs a lot and she’s just everything anybody would want in a fighter.”

Magallon’s last fight was at the University of San Francisco Koret Boxing Invitational March 20, where fellow college amateurs can compete in three-round fights.

Inside the ring, Magallon snarls at her competition, as she throws jabs and stays on the offensive. Outside of the ropes she transforms back into a quiet, nice person according to Salazar.

Magallon lost by decision in the invitational. Gutierrez and Salazar said Magallon needs to improve and develop her own boxing style.

Magallon is 0-2 as an amateur but said she has enjoyed fighting so far and wants to consider entering the professional ranks once she gets at least 25 fights under her belt.

Her next fight will be May 2 in Salinas, California in an event promoted by Gutierrez. Magallon said there is definitely a stigma about boxing being a man’s sport but believes women’s boxing is the future. Despite this, Magallon said she will continue to work at boxing every day she can make it to the gym.