Mermaids, murder and love come to life in student playwright 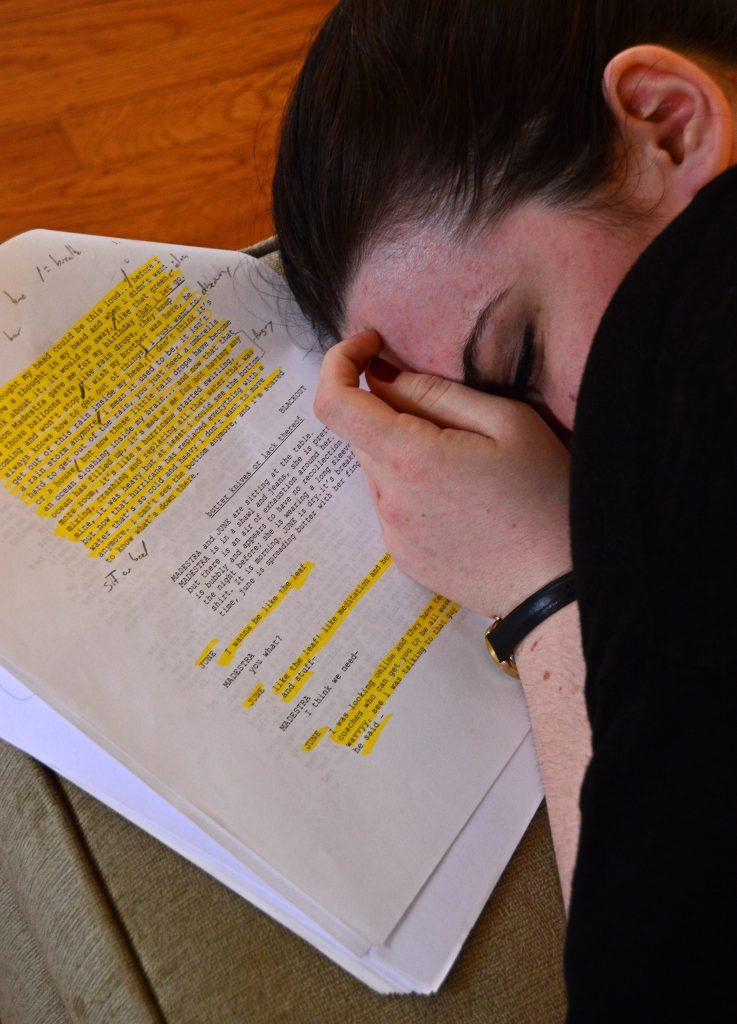 Theater major Jennifer Marte sleeps for her scene as a few of the cast members they rehearse Sunday, April 19. The upcoming play called “Puddles” will be performed at the Greenhouse Festival Saturday, April 25. (Katie Lewellyn / Xpress)

The sounds of accusatory shouts and heavy fist-pounding punctured the silent hillside neighborhood of Rockridge in Oakland as several sets of footsteps darted across the wooden floors of the cream colored cottage at the end of Pedestrian Way.

The GreenHouse program is a playwriting class at SF State that ends with an exhibition of student-written plays hosted by performing arts venue Z Space in the Mission District. The festival will feature work from MFA candidates Carson Beker, Conrad Panganiban, Patricia Reynoso and undergraduate student Ambriz.

Ambriz is the newest talent on the campus community’s playwriting scene. The 21-year-old participated as an actor in GreenHouse last year and has since switched roles as a writer this semester.

“It feels a lot like being thrown out of a helicopter,” Ambriz said. “At first I was trying to grab onto any idea that might give me a sense of direction. But with the support of my director, Terry Buero, I’ve built a foundation on what questions I’m trying to ask and answer with my play.”

“Puddles” is a dark tale of love, murder and mermaids, according to Ambriz. Growing up near a beach, Ambriz said he was inspired by the ocean’s dual nature. He said that while the water can be calm and nurturing, it still has the potential be the one of the most destructive forces on the planet. The play’s main character, Madestra, is a recurring character in Ambriz’s work that he said embodies the paradoxical concept of gentleness and severity.

Played by theater major Elyssa Mersdorf, Madestra’s character struggles with accepting her wayward brother, while protecting her younger sister June from self-harm. Throughout the play, each character faces an internal conflict between responsibility to one’s family and the pull of their own desires.

In her fourth season as a director for the GreenHouse Festival, Buero said she prefers to work with new playwrights and enjoys being a part of their artistic process.

“They’re our future,” Buero said. “My job is to help students find their voices so they can move forward with a strong sense of their artistic vision and individualism in their craft.”

Buero described “Puddles” as a delicate, well-written and beautifully layered theatrical experience. She said it has been a dream to work with someone so wholly dedicated and gifted.

The event’s faculty advisor and creative writing professor Anne Galjour said she was impressed with Ambriz’s commitment to the project and hopes that he considers enrolling in the master’s program.

“Playwriting is an art form that’s meant to be seen, heard and incite a reaction,” Galjour said. “As someone so new to the process, it’s been interesting to see how his ideas have come to life from the printed page and the decisions he’s had to make for his vision to become a reality.”

Galjour said that Z Space is “proud as punch” to work with SF State in an innovative collaboration that promotes new artists as well as effectively pooling resources between the creative arts and theatre departments.

“After so much hard work over the past semester, the festival is an exhale of relief for everyone involved,” Galjour said. “It’s going to be a great time. It always is and that’s why we continue to do it.”