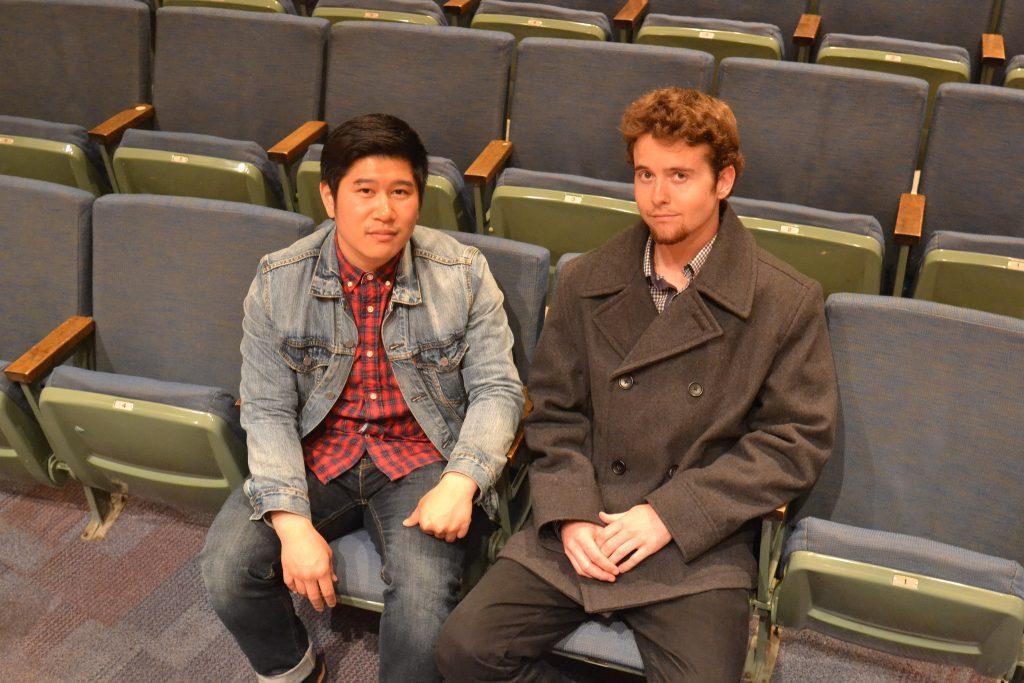 SF State student and co-director of CockTales, Vincent Lam (left) sits with Nathan Barone for a portrait in a theater on campus on Tuesday, April 21. Barone will perform a spoken word piece in the production CockTales. (Helen Tinna / Xpress)

Before being diagnosed with the painful musculoskeletal condition Fibromyalgia halfway through his sophomore year of college, 24-year-old Nathan Barone associated being a man with his ability to play sports.

“It forced me to surrender and understand I won’t be able to do the things that were part of my identity as man,” Barone said. “It left me feeling very vulnerable. Vulnerability and traditional masculinity are not two things that coincide in the minds of many men.”

Barone’s diagnosis was the basis for his spoken word piece for CockTales, a production for men and women to discuss masculinity and gender-related issues. In his piece, the University of Oregon graduate said he will share how he has coped with Fibromyalgia and how it has affected who he is as a person and as a man.

His piece is one of nine that will be presented at “Unplugged and Redefined,” the 7th Annual CockTales performance put on by The Sexual Abuse-Free Environment Place in the Studio Theatre in the Creative Arts building May 1st.

The SAFE Place, a resource center at SF State that provides sexual violence prevention and crisis, puts on performances to raise awareness every spring about gender issues, violence or anti-violence in the community and the importance of getting involved, according to The SAFE Place Coordinator Laurene Dominguez.

“I feel like a big part of a lot of the work we do at The SAFE Place is really kind of pushing things beyond violence just being a woman’s issue,” Dominguez said. “In order for us to really look at violence and make changes to how people are interacting, men have to be in the forefront.”

CockTales provides a space where men can have discussions around gender, masculinity, violence and sexual assault, according to Dominguez. Anyone can join in the production, he said, whether they attend SF State or not, by contacting The SAFE Place.

Barone said that before his Fibromyalgia diagnosis, he latched on to an invisibility he feels most men tend to have about themselves.

“Ignoring mortality, it’s definitely something I did a lot,” he said. “I think it just ties into the history of men being the type to conquer, win or be king of the hill. Trying to separate ourselves from the pack by being reckless and validating our invisibility.”

After his diagnosis, Barone said he had to develop a whole new lifestyle and learn how to be more careful with how he views himself.

“I kind of just define (my masculinity) as persevering through my own situation and being someone who is comfortable where he is in his life,” he said. “How I define being masculine or feminine at this point, just being fully comfortable with who you are and your personal version of what it means to be a man or a woman. You are as masculine or as feminist as you need to be.”

Barone said putting his feeling with everything he has been dealing with into words for CockTales has been a cathartic experience for him.

Fourth year psychology major Vincent Lam is this year’s co-director of the production but has worked as stage manager and performer for the show in the past. Lim has been involved with CockTales since its beginning six years ago when he and former SF State student Ismael de Guzman came together to organize and develop CockTales for SF State. Lim said he and de Guzman saw a need to develop male allyship on campus.

“We wanted to create something specific for men to talk about their stories about masculinity and how their masculinity helps shape their experiences as they are going through life,” he said.

Because of social norms, there are often limitations over what kind of emotional expressions can happen for men, according to Lam.

“Not a lot of people are comfortable speaking about (masculinity or violence),” Lam said. “But using an art form provides an opportunity for people to interpret it for themselves and provides a different medium for people to have these conversations.”