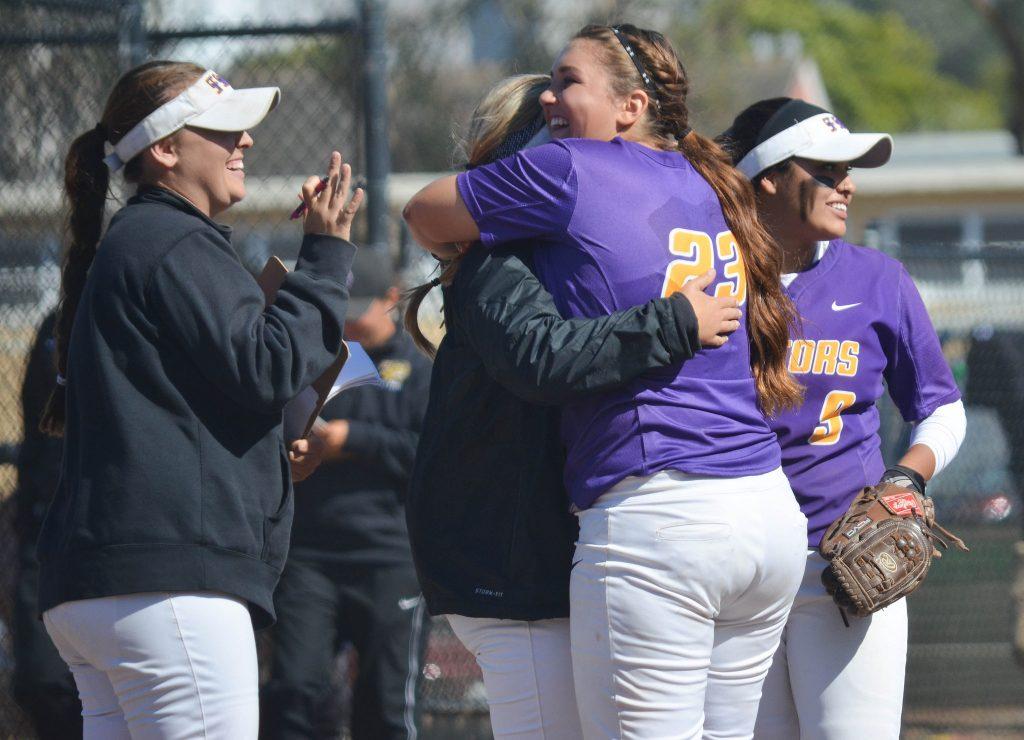 The SF State softball team celebrates after winning the second game of the doubleheader against Cal State East Bay at the Softball Field on Saturday, April 25. (Melissa Minton / Xpress)

The SF State softball team said their goodbyes to three of their seniors Saturday afternoon, as Courtney Gravel, Lucy Fernandez and Selina Rodriguez took the field for one last time in the purple and white Gator uniform. The Cal State East Bay Pioneers tried to spoil the festivities with a win in the first game of the doubleheader by a score of 5-4, but the Gators came back to win their final game of the season with a score of 5-2.

“I thought we played good,” Gravel said. “To end on a high note at the end for the season and play great all weekend is bitter sweet, but we won the last game so that was cool.”

The first game was highlighted by the third and fourth inning in which the Pioneers put up three runs giving them a 4-3 advantage the Gators were unable to overcome.

The Gators biggest threat came in the sixth inning when they had runners on first and second with Gravel at the plate. With a full count, Gravel struck out ending the Gators threat.

The Pioneers added an insurance run in the top of the seventh inning giving them a 5-3 lead heading into the final half inning of the game.

SF State fought to the end when Fernandez hit a bomb over the left field wall cutting the deficit to one. The following at bat, Sara Higa hit a line drive that was caught by a diving Pioneer left fielder, ending the game and giving the Gators the game one loss of 5-4.

“It was really nice to hit a home run in my last game as a Gator,” said Fernandez.

The Gators effort carried over in the final game of the doubleheader taking an early lead in the first inning off an aired throw to first, allowing Gravel to score from second.

The Pioneers took the lead in the fourth inning off a triple from Alex Vega, giving Cal State East Bay their two runs, which were their only ones of the game.

The Gators blew the game open in the bottom of the fourth and loaded the bases when a pop fly ball was misplayed by the Pioneers’ shortstop allowing two runs to score. Fernandez then stepped onto the plate and hit a double to clear the bases, which capped off the four run inning for SF State.

The Pioneers would not go down quietly leading off the top of the seventh with a screaming line drive off the wall. The game ended on a strikeout with the Gator dugout erupting and charging toward the mound to celebrate their final win of the season.

“It was really nice to see that we played together as a team in our last game because you could tell that we all wanted it,” Rodriguez said.

Head coach Cristina Byrne spoke about how proud she was of the seniors and how much she will miss them.

“I have three goals when you come into my program, number one is to get an education and get a diploma, two is lets go out lets compete and try to win championships, and the third one is to become a better person,” Byrne said. “I feel like those three really embodied that, and it was just amazing to watch them grow up right before your eyes and I sound like a parent but it means a lot to see them grow.”