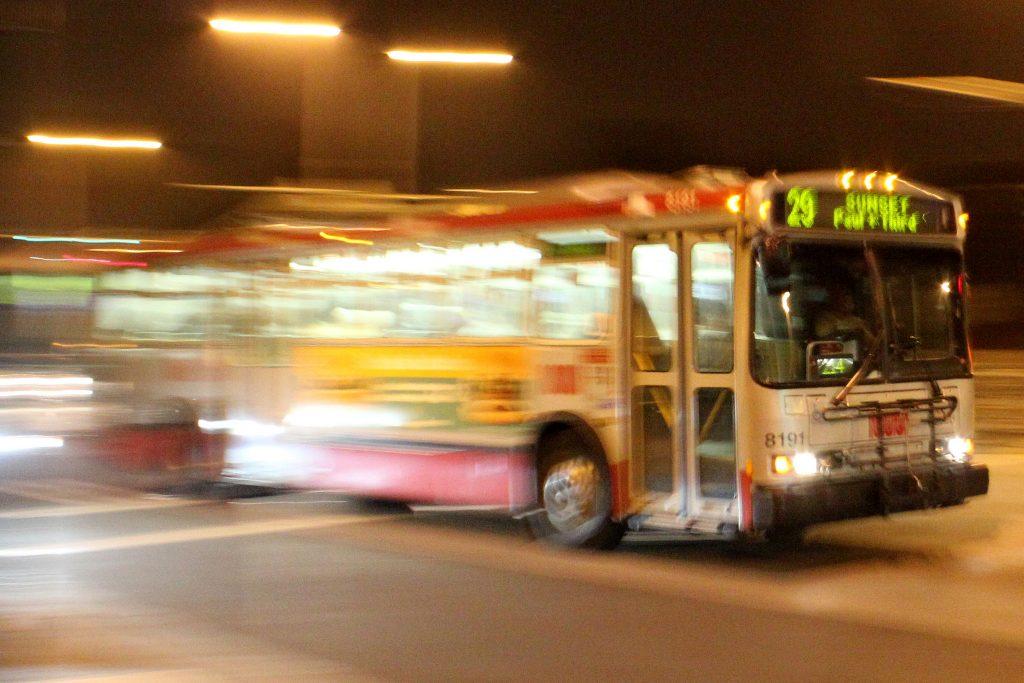 The 29 Muni bus is one of the routes experiencing an increase in frequency, or amount of buses during the day, and heads down 19th avenue towards Brotherhood way in front of SF State Monday, April 27. (Drake Newkirk / Xpress)

As the Municipal Transit Agency service improvements rolled out across the city Saturday, SF State sophomore Andrea Rios said she waited nearly half an hour at the intersection of 19th and Holloway avenues for the 28 bus to arrive.

The changes are part of Muni Forward, a campaign to improve service for some bus and trains with new routes, traffic signals and fewer stops, according to the project website. Muni is looking to take advantage of an improved climate and increased ridership to elevate their reputation, according to Muni Forward.

On its weekend debut, however, arrival times did not improve for some riders.

“The first day is always the hardest,” Rios said as she boarded the bus. “I’ll give it some time for it to improve.”

Significant adjustments include renaming Limited routes to Rapid and increasing the frequency of the busiest lines. Despite the name change, Rapid will follow the same routes as the Limited lines. The 29 Sunset increased arrival frequency from 15 minutes to 12 minutes during the midday commute following the Muni Forward changes, according to the SFMTA website.

“It’s just a matter of semantics, maybe it will change the perception that Muni is actually rapid now,” said Marcus Ismael, SF State advisor to Associated Students external affairs. “I think it’s easier and the ‘limited’ terminology is limited so I wouldn’t know what it meant if I were new to the system. But if I were to see ‘rapid,’ I’d know that it’s a faster route.”

In addition to the increased frequency of the busiest routes, Muni renamed its Parkmerced route from the 17 to the 57 and the 8X Bayshore Express to the 8.

The limited lines ran during select peak periods prior to Saturday. With the new change, rapid buses such as the 28R will be expanded to all day service, according to SFMTA’s website.

Biology major Carissa Ortega said she takes the 28 bus daily to campus and typically waits about 18 minutes before her bus arrives.

“If (the 28) could come every ten minutes that would be great,” Ortega said.

Ortega said she waited for about three minutes before a bus arrived Saturday. She said that she was unsure whether or not she should attribute that outcome to the Muni Forward program or just good timing.

The service improvements took place seven months after Muni fares climbed from $2 to $2.25. Ismael said that Muni is a great program because it encourages more people to ride public transportation, but bringing affordable transit to students should also be a priority.

SF State students and administration are in pursuit of discounted passes for students similar to those adopted by the University of San Francisco, which offers free passes included in students’ university expenses.

“It’s great to have all of these service improvements, but if we don’t pair them with equity for students then what use are they in a larger context?,” Ismael said.