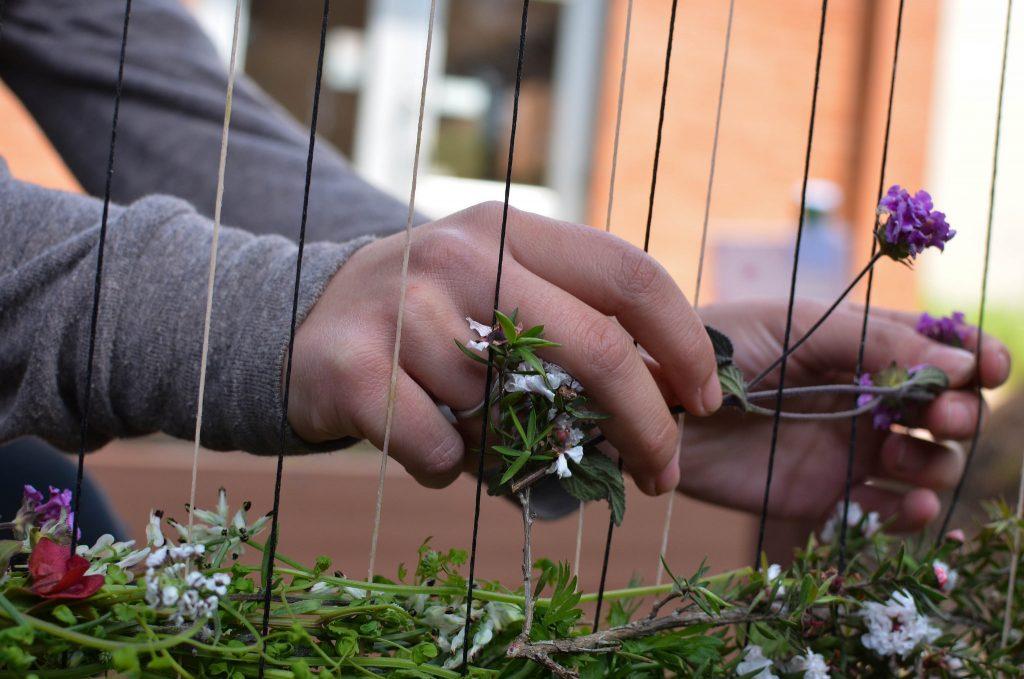 Tiny sprouts of kale, spinach, lettuce and chard jutted up through a layer of soil on display at the reopening of SF State’s Sol Patch Garden April 23.

Environmentally Concerned Organization of Students president Caitlyn Morrell provided tours at the event and explained the purpose of the garden, which is located next to the Mary Park resident hall.

“We wanted to create a piece that is a full circle– a full life cycle,” Morrell said. “We are going to be using the plants we grow here and when they are done we will compost them. So the garden is also about our external waste and how our choices impact the world around us.”

The group received a grant of $1,200 from the California Student Sustainability Coalition to fund the garden and help achieve a goal of zero waste, according to Morrell.

Members of ECO Students care for the garden, but anyone can volunteer, according to Derus.

“We’d love for the housing community to pick up the project to get the students living on campus involved and create a community around this garden,” Derus said. “This garden should be made by, cared for and enjoyed by all of SF State.”

The garden has been tended by students, who have replanted the bed every spring for the past seven years. Morrell helped start this year’s crop.

“I had a vision for it and I felt like there was a target community around here that would enjoy gardening,” Morrell said. “We don’t have many gardening resources really for students on campus, particularly for residential students who don’t have access to community gardens in the city.”

Morrell said she believes gardening is relaxing and can help with anxiety and depression.

“One of the reasons why I wanted to do this was because when I was a freshmen I was really depressed and I felt that I would have really benefited from a community nearby that would help me and bring me back to earth when I was thrown into the middle of this city,” Morrell said.

Students who volunteer are welcome to the fruits and vegetables grown in the garden, Derus said.

“Everything is organic and is tended by students, so everything you eat from the garden is environmentally sound and nutritious,” Derus said.

Chartwells, the food service provider behind the dining centers on campus, and Sustainable SF State have used the produce at past events like the Farm to Fork luncheon. The crop was not ready in time this year, so instead it will be enjoyed at a potluck for garden volunteers and guests, which Derus said will take place as soon as the produce is ready.

Benefits of the garden extend beyond the fruit and vegetables produced, according to Derus, who said volunteering is a great experience.

“The garden is an educational opportunity to show people where their food is coming from,” Derus said. “It’s incredibly satisfying to grow something from a seed and be able to eat the fruit of your labor, literally.”

Gardening is great for students looking for a new hobby, or those who miss the yards they left behind when they moved to the city, Derus said. She said she hopes to increase student participation at the garden, but said many students have never heard of or seen it.

“I wish (students) knew it existed, where it is located and that it is an available resource for the SF State community,” Derus said.

The reopening of the garden happened the same week as Earth Day, which SF State celebrated April 21 at Malcolm X Plaza.

At the Real Food Challenge table, the group promoted their campaign for humane, local and ecologically sound food sources. Junior An Bui who is a member of RFC said students can help by always questioning food sources.

“With processed foods and large corporation farms, we have lost track of where our food is coming from,” Bui said. “We have lost our voice to tell where our food should come from and how it should be grown. The Real Food Challenge restores that voice.”

Morrell said she attended Earth Day to spread environmental awareness on campus. She said events like Earth Day and the opening of the garden create a sense of community around a positive message.

“It’s all students (working on the garden), we all have a bond and this is a place where we can come to be at peace with each other and just do some gardening,” Morrell said. “It’s kind of simple, but it represents a lot.”