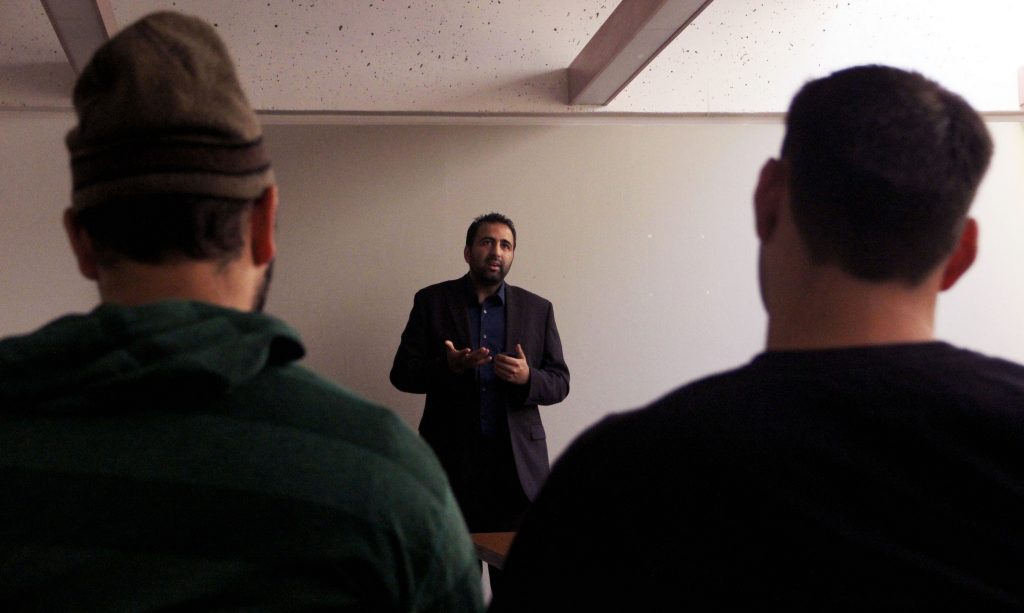 Kasim Hafeez, a self-proclaimed Muslim Zionist, spoke at the Rosa Park conference center April 16, after being asked to tell his story of transformation by an Israeli awareness group on campus.

Hafeez has spent the last two years speaking as an advocate for Israel. Born and raised in Nottingham, U.K., Hafeez said he was exposed to graphic images that were used to manipulate his community to hate Israel and remembers hearing his father speak of Hitler as a hero.

As a college student, Hafeez said he became more radical and passed out anti-Semitic pamphlets. He said growing up he used to hate Jewish people but now wants to stop hatred altogether.

His transition began after reading a book, “The Case for Israel” by Alan Dershowitz, a retired Harvard law professor. At first, Hafeez said he thought the book was full of lies.

“I believed that my beliefs were 100 percent correct,” Hafeez said. “So I thought, ‘If I buy this book I can just show that what they’re putting out is propaganda, so false and weak and that just reaffirms my own commitment to my own beliefs.”

Kasim Hafeez was invited to speak on campus by SF State Senior Kailee Jordan on behalf of the Committee for Accuracy in Middle East Reporting in America and I-Team, a student group who promotes other students to learn more about Israeli culture and history. I-Team is a coalition with SF Hillel, a Jewish student organization who reserved the conference room for Hafeez to speak, according to Jordan.

“I can’t disagree or agree with what (Hafeez) said,” Jordan said. “But I can take it and use it to make my own perspective.”

Kasim said in trying to disprove what he read, he challenged his own beliefs and shifted his views on Zionism. He said he retells his story to inspire others to challenge themselves to research and find their own truth.

After reading various authors, researching for two years and visiting Israel for himself, Hafeez said he concluded that the hatred he felt for the Israeli people was wrong. Meeting people from Israel, experiencing the culture and talking to the people firsthand helped shift his view, he said.

Hafeez said after his trip, he felt a moral obligation to stand up for Israel and share his story.

“For me as a Muslim, I just want to show that what you see in the media isn’t what Islam is,” Hafeez said. “I’m not saying I’m representative of 1.2 billion Muslims, but there are faces within Islam. We need to fight hatred across the board, hatred is poisonous.”

Hafeez said he is still a practicing Muslim and that challenging his beliefs brought him closer to Islam. He said there is some backlash from him retelling his story; his family has disowned him and he has received death threats. Hafeez said the threats do not mean much to him now, although at first he was frightened, he said.

Hafeez said there is no official definition of Zionism, but to him a Zionist is somebody that believes in the Jewish people’s right to a homeland.

SF State senior Khidr Subhani, president of the Muslim Student Association, was not in attendance to hear Hafeez speak but said he had a different understanding of the term Zionist. Subhani said he considers a Zionist to be someone who supports the oppression and the subjection of the Palestinian people by the Israeli government. Subhani said to hear of a Muslim-Zionist is unique.

“I feel like that terminology comes from a personal definition of what those words mean,” Subhani said, “And that includes what Muslim means, and that includes what Zionism means. My understanding of Zionism may be much different than someone else’s, so it’s important to define these terms.”

The conflict in the Middle East has stretched over a century and has grabbed the world’s attention, according to Eran Kaplan, SF State Goldman Professor of Israel Studies. There is no clear answer for who is right or wrong in the conflict, Kaplan said, and there are political and religious layers that complicate the issue further.

The term Zionism and its origin vary with mainstream political Zionism, which started as a political movement in Europe. It pushed for the creation of a Jewish state in the ancestral homeland of the Jewish people in Jerusalem, Kaplan said.

“(The conflict in the Middle East) is being talked about in the media all over the world and it has become a major cause for various groups,” Kaplan said. “Nowadays we see that in Europe, and elsewhere around the world, Muslims who are not Arabs, who are not Palestinians, who are not immediately engaged in the conflict, still very much identify with the conflict. So again this would make the case of (Hafeez’s) quite unique.”