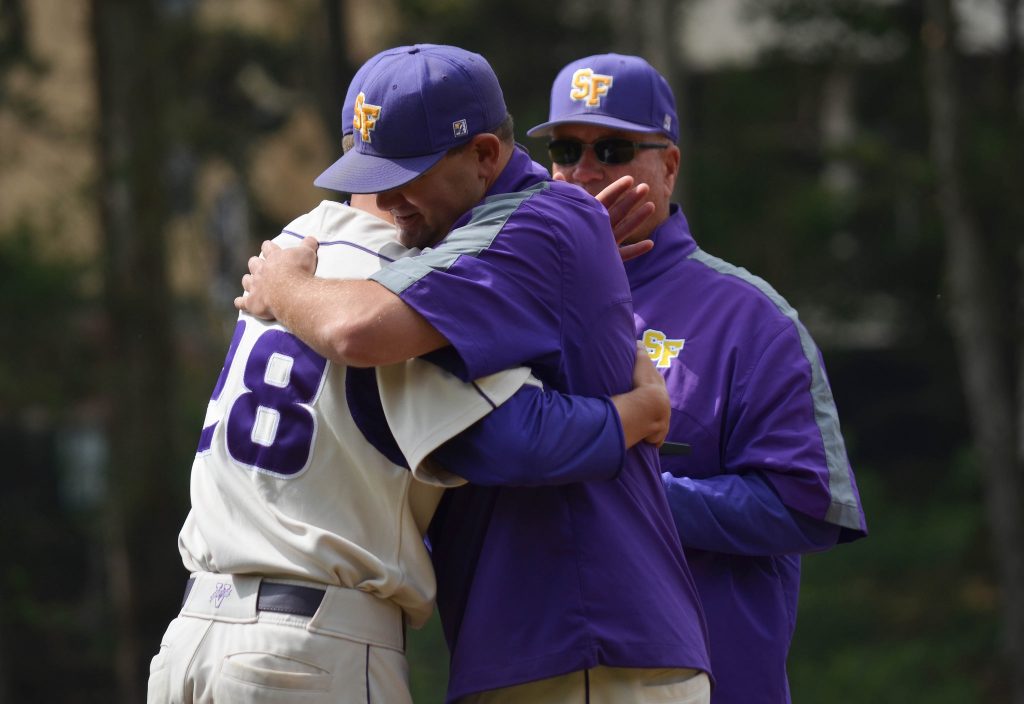 The Gators turned a 7-2 punishment of the league-leading Cal Poly Pomona Broncos into a dramatic final act for the seniors that took to Maloney Field for the last time on Sunday.

One-by-one, the nine graduating baseball players were pulled out of their final game, until only the team’s younger players remained to close out the ninth inning. The crowd passionately saluted each senior as they trotted into the dugout and embraced the awaiting line of players and coaches.

“I wanted to start pulling guys off the field in the last innings so that we could get the fans into it and give these guys a good send-off,” said head coach Mike Cummins. “It was the perfect way to end the day.”

With just two at-bats to spare in his prolific career as a Gator, senior catcher Mark Lindsay slapped his signature opposite-field single over the head of the Broncos’ second baseman for his 212th hit, breaking Phil Kernan’s 1995 record for most all-time hits at SF State.

“Obviously it’s going to be in the back of your head when you’re out there trying to get it,” Lindsay said of his record-breaking fourth inning single. “But I tried to keep the thinking as minimal as possible. It was pretty special that it happened in my last game when a bunch of my family drove up to watch.”

As the catcher transcended into Gators’ baseball history by way of his bat, notching another single in the fifth to cement his final hit total at 213, the rest of the seniors delivered one emotionally-charged performance after another.

In the bottom of the eighth, the Gators tore off of the bench in celebration once again after second-year senior pitcher Ryan Romero stroked the first pitch of his first and final at-bat in a Gators uniform into shallow right field.

Romero’s plate appearance was not guaranteed to happen according to SF State’s head coach Mike Cummins, but was spurred by the combination of an explosive outing for the Gators’ offense and a stifling display from senior pitcher Preston Tarter, who whipped his way through six scoreless frames.

“It was great to be out here with a lot of seniors backing me up in our last game,” Tarter said. “I wanted to have a great outing on senior day and I felt like I did a great job. We put up a team effort and that’s what it takes.”