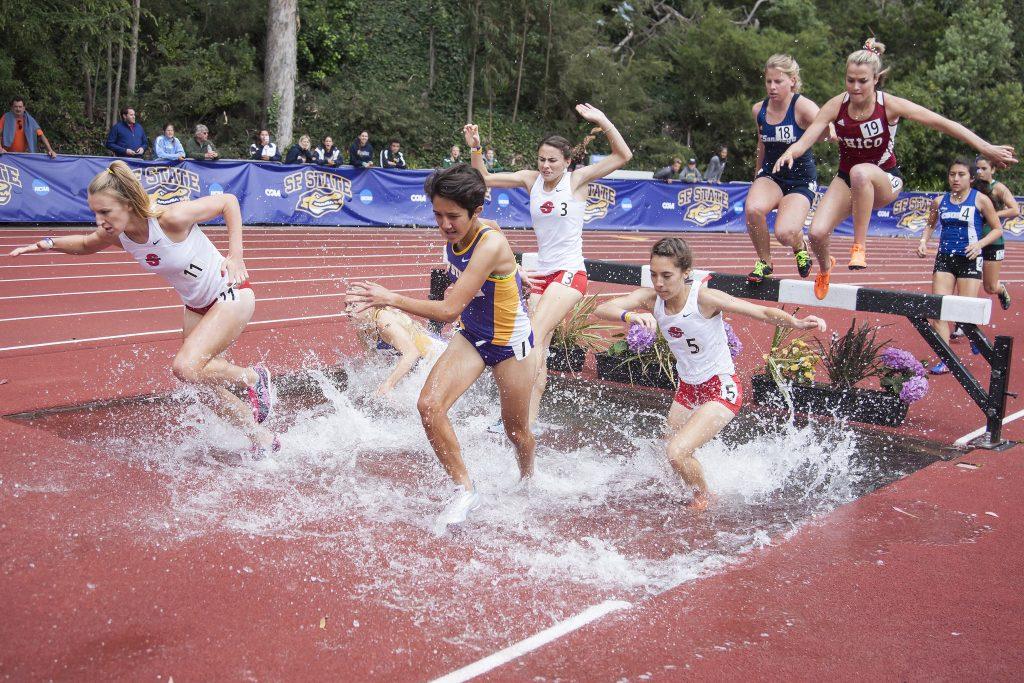 SF State’s women’s track and field hosted the 2015 California Collegiate Athletic Association Championships at Cox Stadium April 30 through May 2, where teams from across the conference competed in a variety of events for three days.

The first day of the CCAA Championships started off with the Gators ending the day with eight points to place fifth among the seven conference teams.

Six Gators competed in two events that included the women’s hammer throw and the women’s javelin throw. Senior Gator Michelle Chung took the spotlight for the day in the hammer throw event. After only competing in a handful of meets this season, Chung came out with a throw of 45.94 meters to place fourth overall.

The second day of the CCAA Championships was highlighted with the record-breaking performance of senior long jumper Hilary King, who set the new long jump school record for the third time this season.

King ran down the runway and with a leap that had her soaring into the sand pit. She said she knew at that moment her feet touched the ground, she had once again set a new school record with 5.86 meters. The previous record was 5.83 meters, which King set April 11 at the Chico Twilight Invitational.

“Coach (Marissa) Chew and I have been working on a lot of consistency,” King said after her record-breaking long jump. “I know I have it in me and I can tell by my land.”

The senior Gator would go on to place second overall in the long jump event, while Humboldt State’s Kate Earle finished first with a jump of 5.97 meters. King said she could not be more ecstatic over her new school record, the long jumper was left with a bittersweet taste in her mouth because she wanted, King wanted to take first place for her team and knew she was so close.

“I did good but in finals I was freaking out and I was fouling,” King said. “It started getting mental for me. (Earle) jumped literally out of nowhere and I didn’t need to see the jump, I just heard people screaming. I wanted to win and it was hard seeing that.”

King will wait to know if she will be competing in the NCAA Division II National Championships. She said she hopes and will continue to prepare for the Gators’ last meet of the season.

With the 2015 CCAA Championships wrapping up the three days of competition, the Gators placed sixth overall among the 11 women’s track and field teams that participated.

The day for the Gators started off with sophomore Alex Jones’ performance in the shot put event. Jones went off to place second overall and set a new personal record with a throw of 13.35 meters.

While Jones was competing on one side of Cox Stadium, the Gators’ triple jump squad was on the other side. SF State had four individuals, including Jordan Guerrero, advance to the triple jump finals.

Guerrero took third overall in the triple jump event and made a new personal record with a jump of 11.64 meters. As soon as she ran down the runway, she said her main focus was just to score points for her team.

“We had a lot of personal records and four girls in finals,” Guerrero said. “I’ve been working on that all season and to be able to do that today is even better.”

After placing second place last year in the 2014 CCAA Championships’ women’s discus throw event, Chung redeemed herself this year by taking first place with a throw of 42.98 meters.

“Today went very well,” Chung said with a smile after receiving her medal. “I got first place and it was my first throw that kept me up the whole time.”

Chung said she couldn’t have asked for a better finish in her last year in the Gator uniform and is proud of all of her hard work this season.

The Gators will head back into practices this upcoming week with their minds focused for the West Coast Last Chance Meet hosted at Cox Stadium May 9.