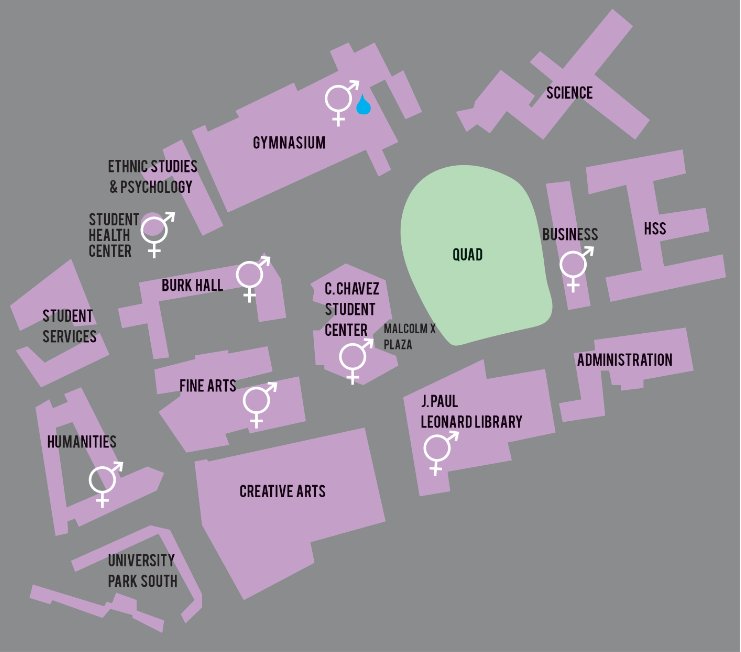 Click through the above image to see where gender-neutral bathrooms are located on campus.  Data collected from sfsu.edu (Produced by Eva Barragan).

Deciding which restroom to walk into isn’t normally thought of as difficult or confusing task. For individuals whose sex does not align with their gender identity, however, using the restroom can be stressful and even dangerous.

The REFUGE Restrooms app, which first launched as a website in February 2014, allowed users to search and add records of restrooms that are safe for transgender, intersex and gender non-conforming individuals, according to iOS engineer Kelleway. His contribution to the project was to translate REFUGE’s valuable information to iOS in app form.

Kellaway became familiar with the REFUGE Restrooms project and its founder, San Francisco area coder and writer Teagan Widmer, in 2013 when REFUGE first showed up in online publications.

“I had a particular interest in tech projects that benefit trans people,” Kellaway said in an email, “so it piqued my interest.”

Kellaway said he thinks there is a need for apps like REFUGE because of the recent political movement in some U.S. states to force trans people to use restrooms that are not aligned with their gender identity.

“It’s alarming (because) violence that occurs regarding restrooms is typically aimed at trans people, not caused by them,” he said. “The intent behind REFUGE is to take the anxiety and potential violence trans people face when using public restrooms away from an activity we all have a right to do in peace.”

Although the response to the app has been overwhelmingly positive, according to Kellaway, he said some individuals in the LGBTQ community might see the REFUGE database as an unnecessary collection of data for their community.

“We’re not past needing resources that make the lives of trans people in particularly easier,” he said.

“What I really like about the app is that it involves the entire community,” Hymowitz said. “Transgender, intersex, gender non-comforming folks– we’re all working together. The app is there to help us but we as a community, can contribute to it and find other restrooms that are safe for non-cisgender individuals to use.”

Associated Students, Inc. Assistant Director for SF State’s Educational and Referral Organization for Sexuality Al Pugh said that although they think an app like REFUGE is an excellent resource to have, they see it as a temporary fix to a bigger problem of institutionalized transphobia and violence against trans people.

“It is sad that trans people must resort to an app to seek refuge, or just use the bathroom without fear of being verbally or physically assaulted,” Pugh said. “However violence and assault are a very present reality, so I am glad there is an app like this available for folks to use.”

Hymowitz is currently using REFUGE and adding all gender neutral bathroom locations he finds on campus so that non-gender-conforming students at SF State can feel safe.

“This app says we’re slowly making progress,” he said. “The transgender community is trying to gain visibility, trying to gain access just to do simple everyday task and we’re making it one step at a a time.”