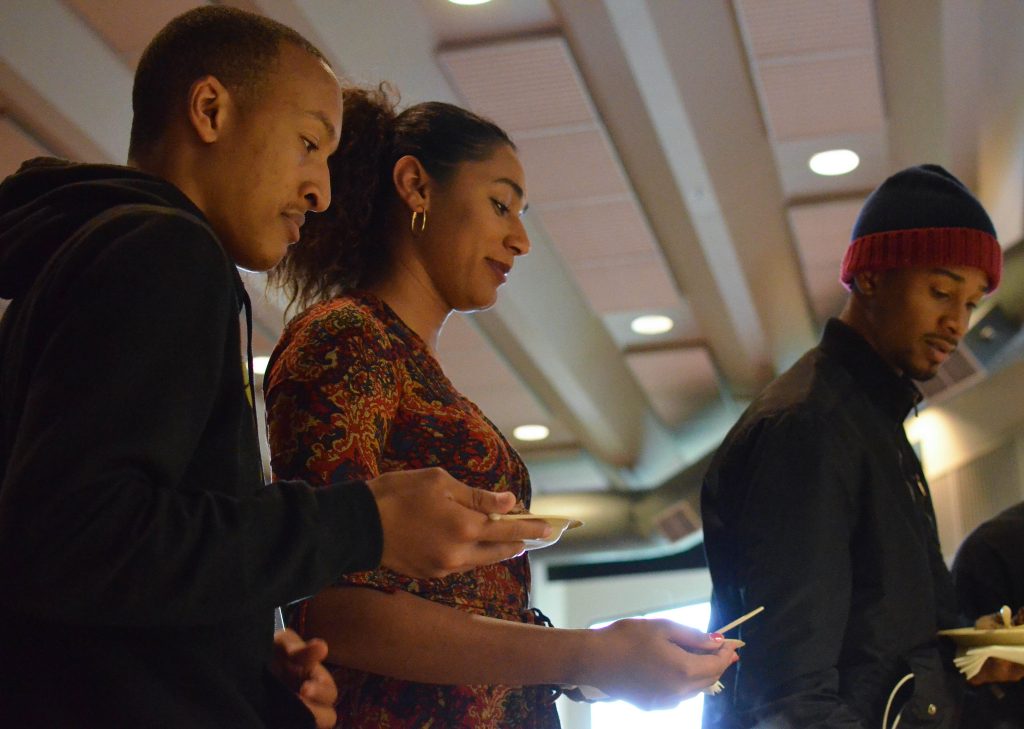 Students get food during the intermission at the screening of Hidden Colors 3: The Rules of Racism at the African American Health Fair in Jack Adams Hall Tuesday, May 5. (Melissa Minton / Xpress

SF State’s 22nd annual African American Health Fair departed from the event in years past Tuesday, widening the scope of the event to focus on the social health issues that affect the black community. The

ran the event, which was held at Jack Adams Hall and was open to all students.

“We are covering racism as the topic for the health fair because it encompasses mental health, which sometimes gets overlooked by physical health,” said SHAC secretary Maggi Horn.

The historical campus event began in the 1990s as community outreach in response to the low level of access to healthcare for students, especially those of color, according to SHAC President Andrew Castillo. Since that access has since largely been addressed, SHAC has broadened the fair in recent years to cover more specific aspects of health, he said.

“It’s going to be a big change from past years,” Castillo said. “We’ve done the clinics. This year we felt, especially with the current events, social health just needs to be addressed.”

SHAC, a student organization that acts as liaison between Student Health Services and SF State students, advocates for students to make sure their needs are being met, according to their website.

“Access to health care has been one of the main priorities of SHAC and we do a lot of outreach in that sense,” Castillo said. “And since (students) have that access, we wanted to shift (the focus of the event) outside of that.”

SHAC presented the third film of the series, “The Rules of Racism,” which tackles the subject of systematic racism. The film explores how institutional racism effects all areas of human activity and the rules, laws and public policies that maintain this system, according to its website. The film proposed that if Americans want to see black communities flourish, they should invest in them by supporting businesses operated by African-American business owners.

“We felt this film is actually able to bring conversation amongst anyone,” Castillo said. “To create a dialogue for people to just talk about what’s going on in the world, especially with current events in Baltimore and New York.”

Patrick McFall, interim associate director of Residential Life at SF State, has attended the fair for the past nine years and said he was especially intrigued when he heard about this year’s event.

“This is new, this is different,” McFall said. “These (SHAC) students are not willing to stick to a normal script, which is what we want from students– to broaden definitions. And it’s timely considering what’s going on in the world right now.”