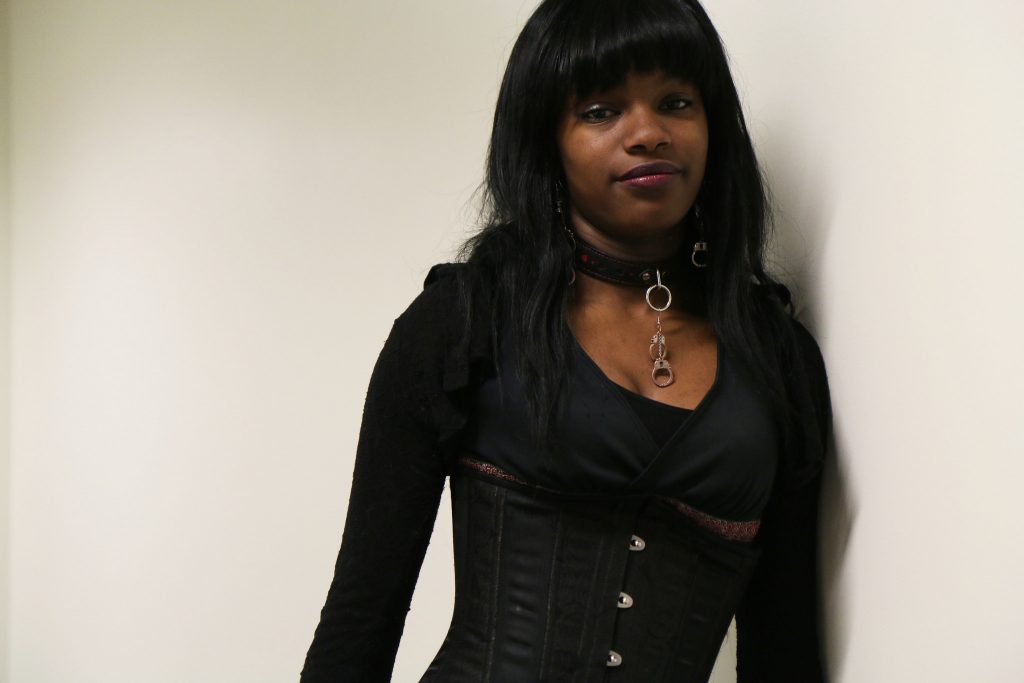 Ariana Fletcher poses for a portrait in the library on Tuesday May 12. Fletcher lives on the Rainbow floor at the Village at Centennial Square. (Marlene Sanchez / Xpress)

Hallways decorated in brightly colored murals and LGBT artwork is what University Park North Area Coordinator Paul Renolis said he envisions for the future of the Rainbow Floor he helped implement for SF State residents in Spring 2014.

, and is one of 15 community-themed residential floors at SF State. Themed communities provide residents with a social and lifestyle experience, according to SF State’s residential life website.

“Right now the Rainbow Floor looks just like any other floor,” Renolis said. “I would love for that floor to make its mark in the university. I want artwork in hallways to evoke a sense of pride in the residents but at the same time I understand that’s something students don’t want because when parents visit, it could possibly out them.”

Renolis said he started the Rainbow Floor last year at SF State for LGBT-identified students and allies. He oversaw the Rainbow Floor when he worked at University of Southern California and said he thought it was important for SF State to have one as well.

“I’m the advisor for EGAY (Everything Great About You) and just hearing student’s experiences regarding roommate conflicts, I felt there was a time and need for the Rainbow Floor to exist at State so students don’t feel ostracized simply because of who they are,” Renolis said.

SF State’s Rainbow Floor Area Coordinator Jamila Cambridge said she feels themed communities in campus housing can help create a space where students feel safe and have a sense of community away from home.

“Being young and identifying as queer can be really hard for some people,” Cambridge said. “With the Rainbow Floor, we want to create a space where students can have a discussion about gender, sexuality and the intersectionality of identities within the LGBT community.”

Within its first year of being established, The Rainbow Floor has already expanded to different areas of residential housing including Village B and the Towers Jr. Suites.

“Right now we have over 115 applications of students interested in living in the new additions of the Rainbow Floor,” Cambridge said.

In order to live on the Rainbow Floor, students must fill out a separate application when applying for housing, according to Cambridge. On the application, students have the option to choose if they want to room with someone of a specific sexuality or gender.

SF State freshman Ariana Fletcher identifies as pansexual and is a resident on the Rainbow Floor.

“The Rainbow Floor definitely fosters a safe environment,” Fletcher said. “Even on my hardest days I never felt like I was not some place I could call home and relax. I always knew that if I had a problem my roommates, floor mates and definitely my RA were there to help.”

Inside the Rainbow Floor, the residential advisors plan two mandatory retreats that are centered around LGBT-identified discussions such as the coming out experience, forming new identities and other issues that pertain to the LGBT community.

“This year was our trial run and we’ve gotten open feedback from residents and now we have a stronger curriculum for that community,” Renolis said.

He said he received feedback that students on the Rainbow Floor want to feel more connected the different LGBT organizations on campus and to the greater LGBT community in San Francisco.

“I think one thing that I’m excited to see is that even though we have some set programs in place, it’s really where the residents want to take it,” Renolis said. “The future of the Rainbow Floor really lies in the hands of the people who live on it. Maybe in five years the community they will create will turn the Rainbow Floor into something entirely different.”