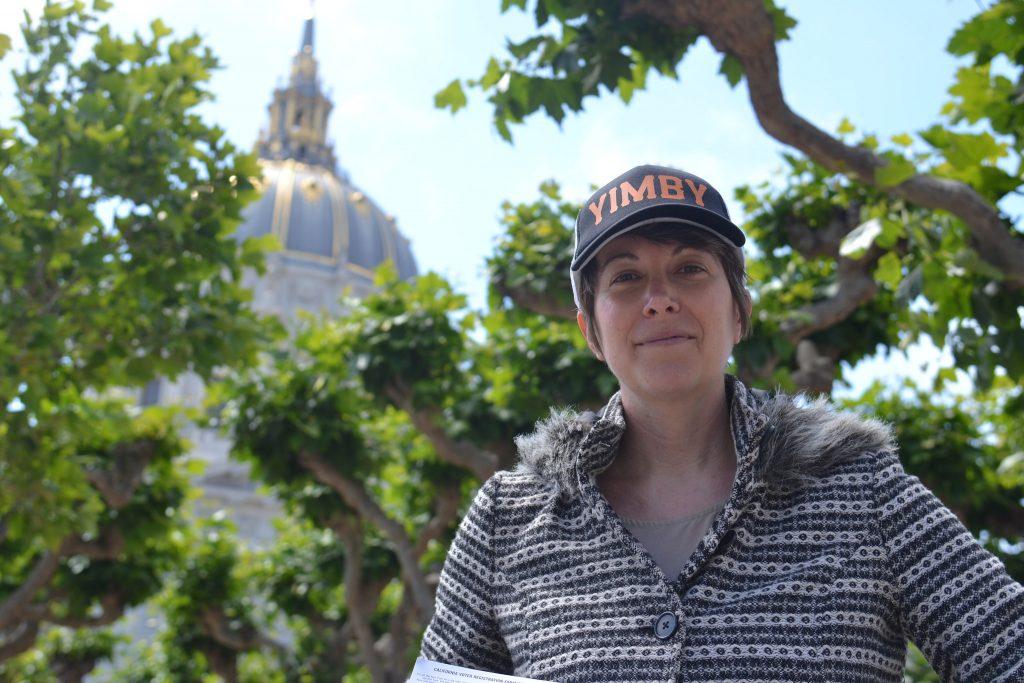 Mayoral candidate Amy Weiss takes a moment from her day of campaigning in front of City Hall during a May Day worker's rights rally Friday, May 1. She gathers signatures for the upcoming election. (Helen Tinna / Xpress)

As Amy Farah Weiss walked her candy apple red bicycle in front of the steps of City Hall, the Bay Area native handed out voter registration sheets from the basket of her cruiser on a windy day in May.

She paused to chat with local activists Andy Blue of San Francisco coalition Plaza 16 and Pirate Mike about the upcoming mayoral race and how she plans on taking the position in the upcoming November election as May Day protests played out behind them.

Weiss announced her candidacy for San Francisco mayor in December. The Divisadero community organizer said she is excited to try her hand against incumbent Ed Lee.

Weiss, who received her master’s degree in organizational development and training at SF State in 2010, is running on a platform called Yes In My Backyard. The slogan amounts to providing a positive solution to a problem instead of rejecting that a solution can be found, according to Weiss.

“It’s about finding your strategic yes,” Weiss said. “How can we connect the neighborhood to a national level? I believe (issues) start small and build outward from there.”

The YIMBY slogan is founded on inclusive development and providing a local government that takes into consideration the needs of specific neighborhoods, Weiss said. YIMBY even appears before her own name on her website as a testament to her commitment to the phrase, she said.

Weiss has founded her platform on three main issues, the first being to foster the development of San Francisco as a city for innovative eco-development. She considers this her main project if elected mayor.

The plan involves using green technology to fund classes at City College of San Francisco, as well as using a contested building site at the college to develop urban agriculture. Weiss also wants to utilize hemp technology by legalizing it and using it as insulation material in new buildings.

“My legacy is eco development,” Weiss said. “I want to push San Francisco further with a plan that integrates the community at Balboa Park.”

Second, Weiss said she wants to reform the San Francisco Police Department to work with psychiatric hospitals and instill a non-confrontational culture. This includes working with the police union to redefine values and performance measures.  Weiss said that the plan will be a challenge and that she has already encountered resistance from within the department.

“I expected that,” Weiss said. “But it’s going to be my job to convince people that just because we’ve been doing something one way doesn’t make it the right way.”

For her third initiative, Weiss said she wants campaign finance reform and to “disrupt pay-to-play” politics which she plans to start doing with her own campaign. Weiss plans on using her campaign funds on local artists and organizations to produce her marketing and promotional material instead of advertising firms.

Her hyper-local sensibility stems from her rejection of what she sees as a consumerist culture in San Jose, according to Weiss, who grew up there.

“People identified their neighborhood by the closest mall,” Weiss said. “When I came to San Francisco each neighborhood felt like a mini-vacation.”

“Ed Lee is a formidable incumbent,” Lee said. “He has a generally high approval rating and any challenger is really going to have to prove that they can do the job better. It’s always good to have choices, however.”

Mayor Lee has a 70 percent approval rating among Chinese voters, who make up 20 percent of the electorate, in addition to support from tech workers, union workers and homeowners, according to David Lee in a December SF Gate article.

One of the issues that students are concerned about this election is financial support for public transportation. Allison Soukhamthath, a hospitality management student, would like to to see the next mayor work with the University to provide Muni passes for students.

“It’s expensive to ride the bus every day,” Soukhamthath said. “When you’re a full time student it’s a struggle to get that last quarter.”

Weiss said she is open to coming up with a solution for students as long as it fits into her plans for eco-sustainability.

“If we can find a way to ensure that students will use the passes and give up their cars to create a more eco-friendly environment, I’d work to make that happen,” Weiss said.

With the election in November, Weiss said she thinks her brand of politics is something for which San Francisco is ready.

“My presence is doing something radical,” Weiss said. “People are hungry for something unique. The course of San Francisco politics will be unimaginative if Ed Lee stays in office and I want to heal this.”