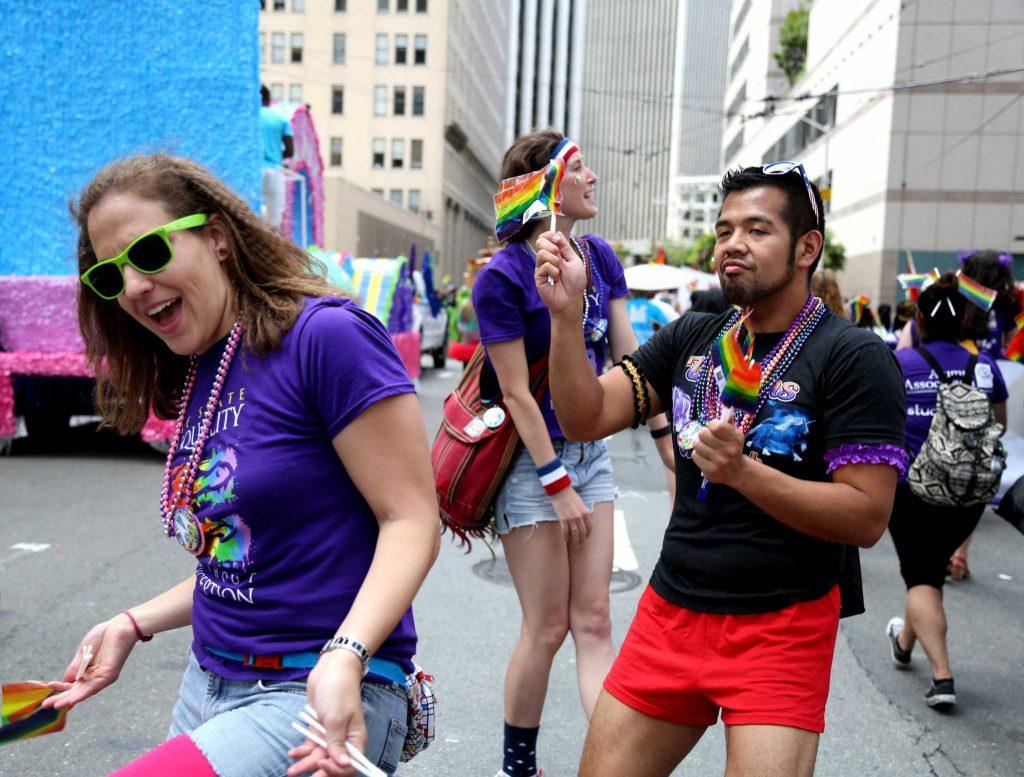 SF State students dance while waiting to participate in the Pride Parade in the Civic Center San Francisco on Sunday, June 28, 2015 (Xpress/Emma Chiang)

Riding in a pick-up truck bedecked with rainbow-colored streamers, SF State students and faculty joined the thousands of San Franciscans who flooded Market Street in support of the 45th annual Pride Celebration and Parade Sunday.

This year’s parade came just three days after the historic U.S. Supreme Court ruling that vested the right for same-sex couples to marry across the country.

Marina Whitchurch, an adjunct faculty member in communication studies at SF State said the float was embellished with 10 flags, symbolizing the diverse factions of gender and orientation that exist within the spectrum of sexuality. The flags represented gay, bisexual, pansexual, intersex, polyamory, polysexual, asexual, transgender, genderqueer and straight people, she said.

Pam Su, director of campus recreation, acted as chair of the planning committee for SF State’s contingent in the parade, spearheading the assembly of this year’s float.

“Being involved in the parade is so much fun,” Su said. “It’s a way for SF State to connect with the city at large and actively support its community.”

Members of Everything Great About You, the on-campus housing’s Gay, Lesbian, Bisexual, Transgender, and Ally network, collaborated with Su and her planning committee to craft the decor for the float and implement its concept. EGAY’s co-president, Alex Ansare said they have been planning the Pride Parade float since April. 2012-2013’s EGAY historian, Jex Nguyen, said that the substantial turnout for the parade reflected how much the queer community on campus has flourished.

Whitchurch said that the float is a symbol of education, as it creates visibility for a range of queer folk. Representing each respective group within the queer community serves as validation for a number of different identities and speaks to the strides that have been made for sexual equality, Whitchurch said.

“I’ve seen the perception of queer people evolve from tolerance, to acceptance, to celebration,” Whitchurch said. “It’s very telling of the changing times that have been made possible through education and political action.”

Generating awareness about variations in sexual identity is part of EGAY’s aim to normalize queer discourse both on and off campus, JD Miller, EGAY’s 2013-2014 president said. During their presidency, Miller made it a priority to speak to teachers in high schools as well as members of their community about the importance of acknowledging queer youth’s identities.

Miller said it was essential for EGAY to educate the community to extend the safe space created in residential housing to the greater area in which students live.

“Eight years ago, it was nearly unimaginable that same-sex marriage would be possible outside of California,” Miller said. “Now it’s legal across the country. One day it won’t even be called same-sex marriage. It’ll just be recognized as marriage. Having conversations like these helps to open people’s minds to alternative perspectives.”

San Francisco’s 45th annual Pride Celebration marks SF State’s third year participating in the city’s Pride festivities. President Leslie E. Wong said he was surprised that the University was not involved with the parade prior to his arrival to the school.

“(SF State’s involvement in Pride) affirms identity on campus and identity in the city,” Wong said. “They’ve knocked on doors to protest Prop. 8, a few have interned with Congresswoman Nancy Pelosi and a number of groups have attended caucuses to vocalize their stance on human rights.”

Student advocacy in political issues are a point of pride at SF State, Wong said. He said he is proud of students’ engagement with Congress and legislative leaders and the ways they have incited change by plugging themselves into the political process.

“Students at SF State are pioneers in activism and their involvement today attests to the difference they’ve made with all their hard work,” Wong said.