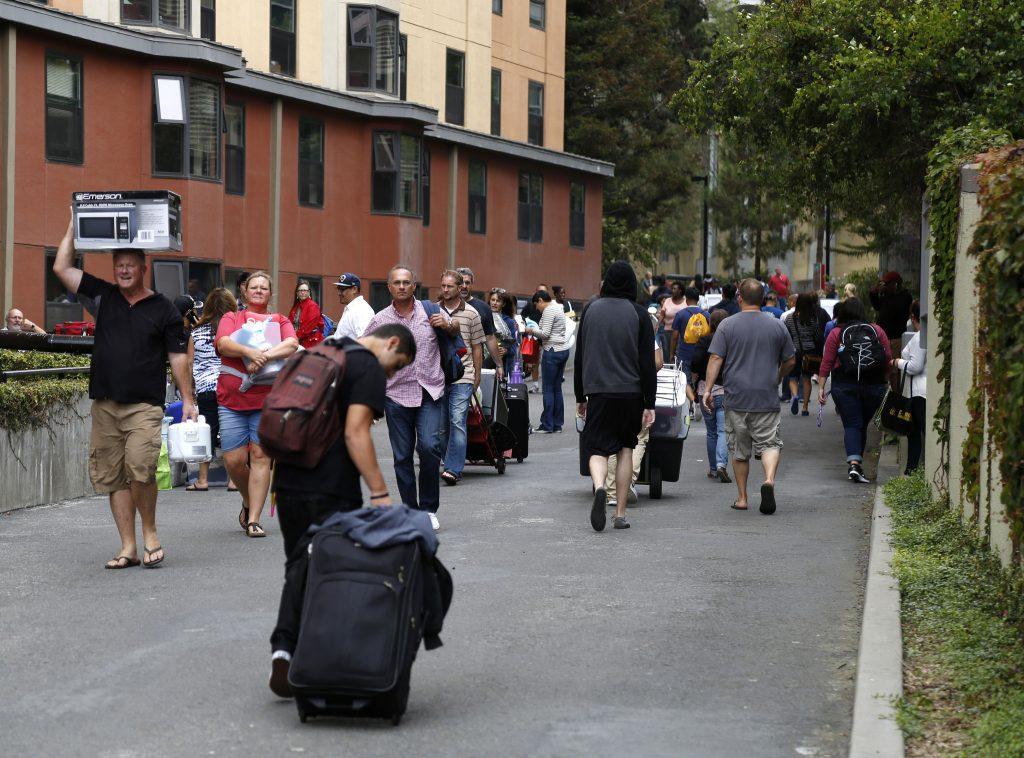 Freshman and their parents fill the walk ways to the dorms on move in day Thursday Aug. 20 at SF State. (Emma Chiang / Xpress)

“It’s a really good school with great programs and internships,” said freshmen nursing major Gina Greengrad regarding her decision to attend SF State. “Plus, everyone wants to come to San Francisco because it is such a big and interesting city.”

The 17 year old from Santa Rosa said she was excited to move in and begin her life as a student at SF State.

“I’m ready to just have new experiences, live on my own for the first time and just be an adult,” Greengrad said.

The record number of new freshmen was partly due to a significant rise in applicants, according to Jo Volkert, the associate vice president of enrollment management.

Students who applied for the 2015-2016 academic year did not face easier admission requirements than previous years, according to Volkert, who said SF State used the same standard CSU eligibility index for applicants from the six Bay Area counties and a slightly higher index for out-of-area applicants.

Due to the rise in both applications and admissions, the freshman enrollment is expected to be the largest ever, with approximately 4,200 students registered. An estimated total of over 9,200 new students will join the SF State community, including newly enrolled transfer, graduate and international students.

While the freshmen class is bigger than ever, total enrollment of new students may be on track to break records this year too, according to Volkert, who said the numbers are currently changing due to students adding and dropping. Total enrollment figures will be finalized the fourth week of school on the official census date, Sept. 21.

“(The total) incoming class is not quite the biggest because back in the 2009-2010 school year we had over 9,300 while now we are at 9,200, so it’s very close, but this is knowing that there will be still more people that will come,” Volkert said. “It all depends on the next four weeks.”

High enrollment has led to more students than ever looking to live on campus. This year 3,500 students will live on campus, compared to 2,800 students in 2014, according to Philippe Cumia, the director of student housing.

To accommodate the increase, SF State added close to 500 additional beds on campus at University Park North and University Park South. Legacy residents were moved so that the units could be converted into student housing, Cumia said.

Sophomore Gaby Archambeau who lives at University Park North said cost and convenience were major factors in her decision to live on campus this year.

“As a 19-year-old student living on campus means for easier access to early morning classes, allowing me to do more with my day,” Archambeau said. “With how close classes are and how big the University Park North apartments were, the cost was virtually ideal compared to living in the city.”

She said she believes second year students saw on campus housing as a better alternative to living in the city this year.

“I feel like more second year students chose to live on campus this year because they realized it was the easiest option,” Archambeau said. “It’s close to classes, finding a roommate would be so simple and our payments could be tied into our financial aid.”

Sophomore Ailish Bryant, who works for the housing business office, helped new students get around by answering questions and providing directions at Welcome Days. Bryant said that although Welcome Days are always crowded, she believes this year was extra busy because there were a lot more residents moving in.

“As someone not moving in, it’s not as bad for me, but I have been avoiding the buildings all day because the lines are so long,” Bryant said.

Volunteers, employees and members of student organizations assisted at the event to help introduce new students to the SF State community. Some carried boxes to students’ rooms while others led students on tours around the campus.

Elizabethe Schlumbohm, an 18-year-old freshman, said she was both excited and nervous to live on her own for the first time.

“Everyone is telling me, ‘You’re going to freak out when your parents leave,’ but I don’t know,” Schlumbohm said. “My sister did, but I think I’m going to be the one that doesn’t freak out.”

She chose to attend SF State because of the campus and the school’s location.

“SF State is just far enough away, and close enough to come home at the drop of a hat,” said Schlumbohm, who is originally from Temecula, California.

“It’s a good place to go to school,” Volkert said. “Particularly for people from out of the area, San Francisco has great job opportunities and potential for job growth. It’s a really desirable area to live.”