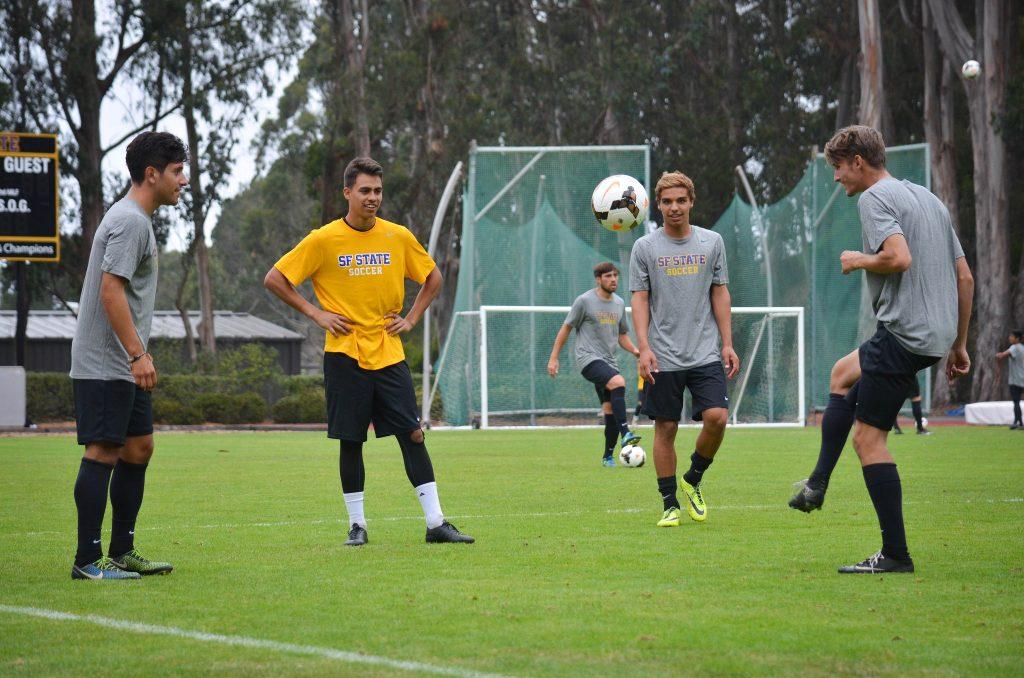 Twenty-eight pairs of soccer cleats trod onto the sunken field in the middle of Cox Stadium before Friday afternoon’s practice. The herd of try-out hopefuls had thinned for the final time, and the remaining players, no longer anxious, smiled and laughed through a series of warm-up drills as they prepared for their second session of the day.

“We had about 25 new faces in camp this year,” said second-year head soccer coach Matt Barnes. “Our numbers are good this year and we are well-dispersed between age groups. You can’t jump into things as quickly as you would like to in the first week when you’re making cuts. It’s just the basics of who we are that we have really been focusing on this week.”

Barnes expects the team to benefit from a full calendar year of his recruiting. The Gators fielded a shallow freshman class prior to Barnes’s arrival, but transfer acquisitions over the summer rounded out the group of current sophomores, he said. This year’s incoming freshman class has also impressed through the first week of camp, according to Barnes.

“We’re building up to be a good family this year,” said senior team captain Max Talbert. “We had a captain’s practice all last week so we got to know each other pretty well, and with all the new guys everything is starting to click. Last year, we went through the basics and this year we’ve been picking it up; (Coach Barnes) knows what he’s doing. We should win it all and if we don’t, it’s going to be a bust, so win or go home is pretty much every game for us.”

Talbert leads a core of returning players that clawed their way to an 8-7-3 record last fall despite posting a 0-5-1 record away from Cox Stadium. The hope that the additional young talent will buoy last year’s squad has been felt throughout the formative stages of camp, according to incoming freshman Brandon Brunac.

“The guys are super relaxed and fun,” Brunak said. “They take me in as if I’m a returner. The college level is a lot faster and the practices are more intense, but the coaches and the guys are super nice. It’s just an awesome place to be.”

The integration of skillful prospects and established veterans is key to a cohesive on-field product, according to Barnes.

“We brought in a lot of talent and just have a more talented team than we had last year,” said Barnes. “Philosophically speaking, we’re doing a lot of the same things we did last year, but we’re going to be better at it.”