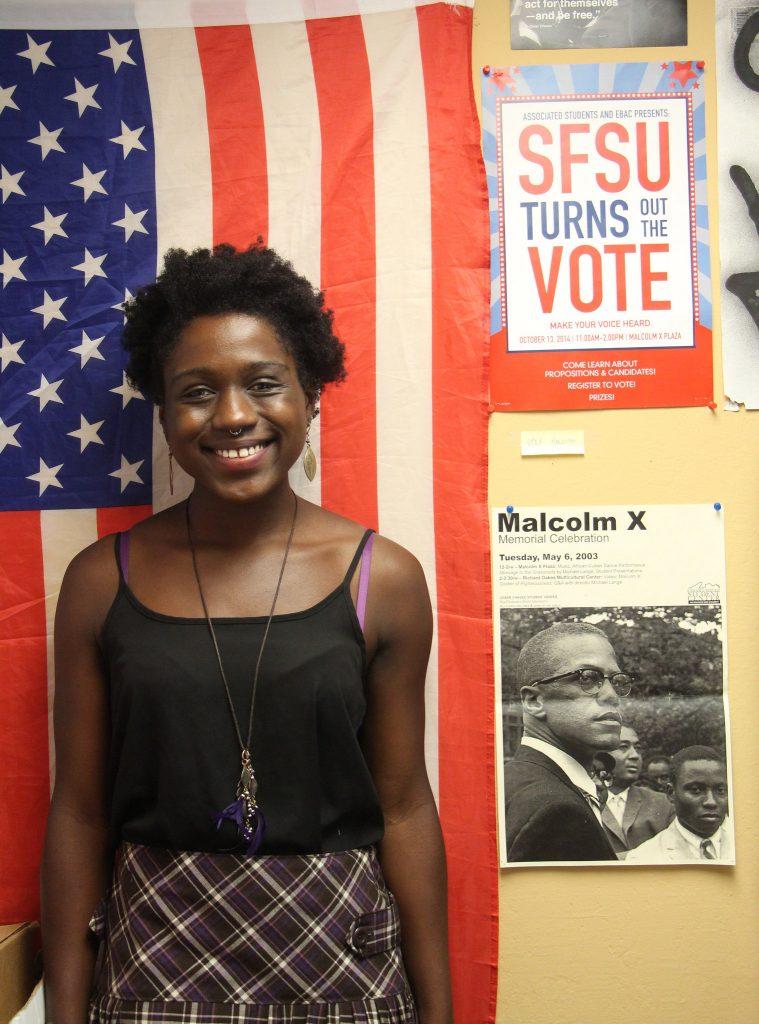 “That is what first got me into politics, and with my background of being an African American woman of color, even if I didn’t want to care about politics, politics constantly affect me,” Charles said.

Charles said that growing up in the nation of Islam is what first sparked her interest in politics, because the religion focuses not only on spirituality, but also on changing the American system.

“On the national level, whether looking at the voting-age population or the voting-age citizen population, in every year of this analysis, young adults had voting rates below all other age groups,” the report said.

SF State has been working to increase students’ political engagement and voter turnout, according to Charles.

“We have an on-campus polling place, so students are able to vote between classes, hold events before every election to keep students informed and many students are increasingly taking their message to voters through social media,” Charles said.

Charles also works with UpVote, a non-profit organization that helps register voters in San Francisco and informs them of the candidates and the current issues on the ballot, according to Charles.

This year, Charles said she has already registered 200 voters and plans to help many more students register as the November elections approach. The resources at SF State help promote political engagement of students, Charles said. SF State’s polling place is located in the Towers at Centennial Square.

“With everything at stake and with a polling place being on campus, I know there will be high student turnout, and my focus at SFSU is to make sure every student knows their voice is heard,” Charles said. “With rising housing costs and the cost of living in San Francisco, students know they cannot afford to be silent and must have their voices heard.”

Luoluo Hong, vice president of student affairs at SF State, said Charles is respected for her dedication to increasing student participation in politics.

“I think her devotion to getting students engaged has had a direct positive impact on increasing the number of students involved with politics and coming out to vote,” Hong said. “I really admire her passion and commitment in this regard.”

Charles said even her decision to attend SF State was politically motivated.

“SF just has 10 times more of an engaging political environment for what I’m looking for,” Charles said, compared to her second choice, California State University, East Bay. “Of course people probably have different opinions, but (SF State has) the type of political environment that I want to be in, everything is so fast paced and everyone is so passionate.”

Charles, who is very politically active, has worked on several campaigns, including President Obama’s presidential campaign and Supervisor Norman Yee’s campaign for the San Francisco Board of Supervisors.

“Naeemah, as long as we have known her, has always been top of our list as people who can represent students and can speak eloquently and passionately about what the issues are,” Giarrusso said. “We can put her in meetings with elected officials, and she can really work operationally in those meetings.”

According to Giarrusso, while there is no current existing total of registered student voters at SF State, it is important for students to be involved in the upcoming election and voting process in order for their voices to be heard.

“If our leaders in Sacramento know our students are engaged, and we have 470,000 of them in the state, that has an effect,” Giarrusso said. “It doesn’t matter who our students vote for, it just matters that they vote.”