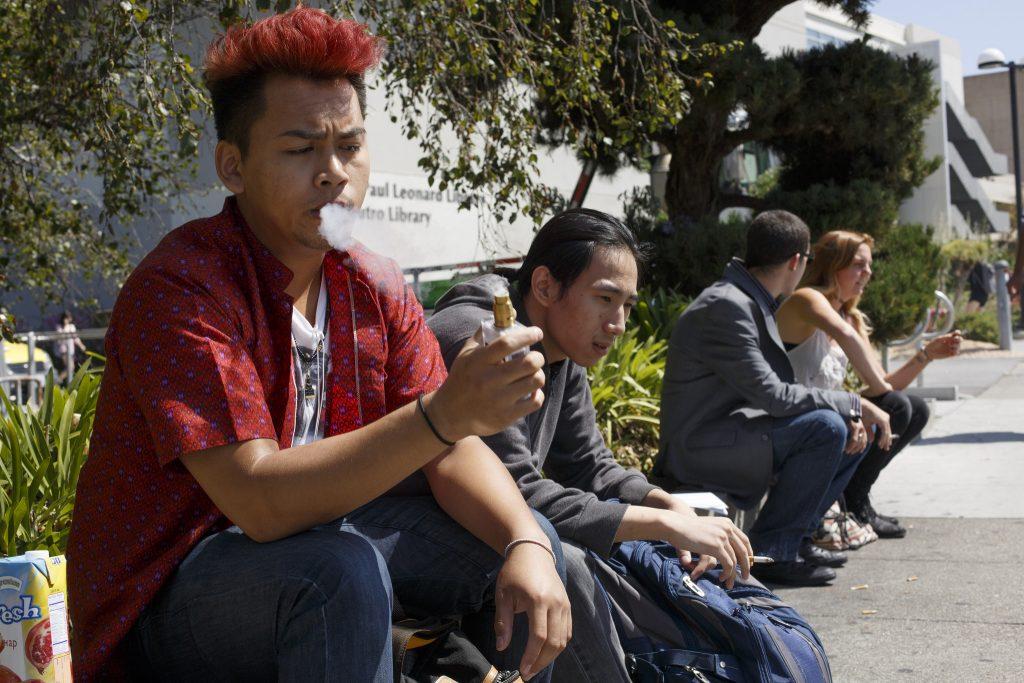 As clouds of vaporized nicotine syrup from e-cigarettes have risen across the country, so have concerns about potential negative health effects. SF State’s new smoking policy will ban their use on campus beginning Sept. 8.

“The President’s office carefully examined its smoking policy,” said Adrianne Bee, interim associate vice president of SF State. “SF State joined the more than 1,500 universities nationwide that are taking a protective stance by banning their use.”

E-cigarettes, which are defined by the Federal Drug Administration as battery-operated devices that turn chemicals into an inhalable vapor, will be included in the existing policy that currently prohibits smoking on campus.

SF State will enforce the restriction on e-cigarettes using $58 fines as an incentive to limit smoking to designated areas.

The injunction comes in the wake of warnings from several groups, including the World Health Organization, to consider the negative health effects of e-cigarettes.

There is little known about the lasting health effects of smoking e-cigarettes, according to SF State health educator Christine Morley, who said the devices have only existed since 2003.

“There aren’t any long term studies about the health effects (of e-cigarettes),” Morely said. “But there have been some short-term negative health effects that have been found.”
Potential effects include shortness of breath, burning, dizziness, sore throat, nosebleeds, headaches and chest pains, Morely said. The nicotine used in e-cigarettes can even stunt brain development, according to Morely, who also said e-cigarettes have been occasionally known to explode in the user’s face due to an overheated battery.

Because e-cigarettes are not FDA approved, the amount of nicotine in the syrups can vary wildly, Morely said. A recent study by the California Department of Health found that the syrups contain at least 10 chemicals known to cause cancer and high levels of formaldehyde. However, these chemical concentrations are significantly reduced compared to traditional cigarettes, Morely said

When SF State’s Student Health Center conducted the National Health Assessment at SF State last spring, they found nearly 14 percent of students on campus smoke cigarettes and more than 10 percent smoke e-cigarettes, according to Morely, who said these were significant numbers.

Chemical levels in e-cigarettes are brand dependent, according to Magic Dragon Smoke Shop owner Naji El-khuri. The high-end artisan brands that he sells at his shop are composed of 99-100 percent vegetable-based glycerin, El-khuri said.

El-khuri said he has noticed that e-cigarette smokers often will blow the vapor into people’s faces or smoke the devices inside restaurants. He said this may be because people do not equate the secondhand vapor from e-cigarettes to regular cigarette smoke. E-cigarettes should be limited to outdoors, according to El-khuri, who said that creating designated areas is overkill.

“I agree (e-cigarettes) should be banned indoors,” El-khuri said. “A lot of people just don’t want to intake nicotine.”

Student Health Services Director Dr. Alastair Smith said the change has been more than two years in the making. In 2012, the University of California President Mark G. Yudof sent a letter urging all UC chancellors to include e-cigarettes in their college’s smoking policy, which went into effect January 2014. In 2013, a letter from California State University Associate Vice Chancellor Ronald E. Vogal announced plans to create a tobacco-free CSU system. Using the UC as a model, the CSU aimed to ban use of any tobacco products on all 23 CSU campuses, according to the letter.

Opinions regarding the ban are mixed for students at SF State.

“I already smoke in the designated areas,” said second-year biology major James Nickelson. “(The change) is not that bad. It won’t affect me much.”

Terra Marchant, a biochemistry major at SF State, said the change in policy was bound to happen, because she believes e-cigarettes are linked with the proven health dangers of traditional cigarettes.

“I think as long as e-cigarettes are treated the same as cigarettes and not completely banned, then it makes sense,” said Darin Vergara, a computer science major at SF State. “Vaping is still a freedom that should be allowed.”

Locations of the designated smoking areas include Lake Merced Boulevard near Maloney Field, Holloway Avenue near the Library and Mary Ward Hall and outside the Humanities building on State Drive.