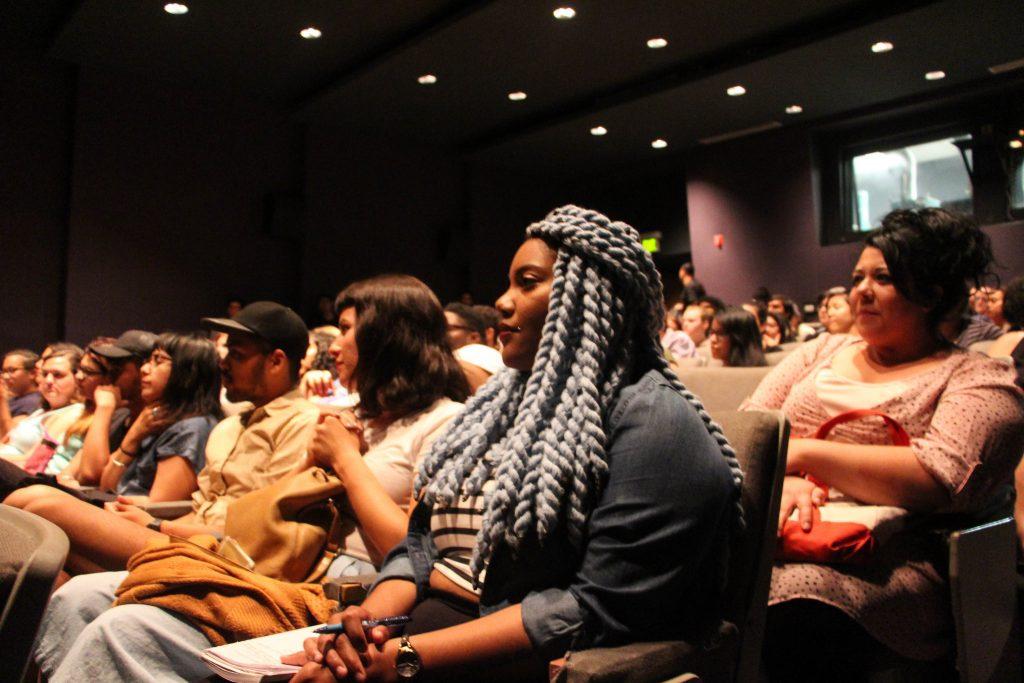 A discussion on queer and transgender communities of color in the Bay Area’s ever-changing landscape brought together more than 100 people at the Coppola Theatre, Thursday, Sept. 10.

“This is an important topic because of the social and political history of the Bay Area,” said sociology professor and department chair Andreana Clay, who is also a member of the Center for Research and Education on Gender and Sexuality. “…queer and trans people of color, particularly young people, continue to be overlooked in the discourse on LGBTQ lives.”

The event, co-sponsored by the sociology department, sexuality studies and CREGS highlighted the effects of racism, displacement and gentrification on queer and transgender communities.

San Francisco has the highest population of adults who identify as either lesbian, gay, bisexual or transgender, according to Gallup poll conducted from 2012 to 2014.

Garza, who is a co-creator of #BlackLivesMatter and special project director of the National Domestic Workers Alliance, said that queer and transgender people of color often face heightened levels of discrimination and violence.

Statistics released by SF LGBT Center show that 81 percent of San Francisco’s LGBTQI population has experienced harassment, while 68 percent has been physically abused.

Jim Gilligan, an associate professor in the English and literature department at SF State, has conducted extensive research on issues such as queer bullying and gender non-confirmative students.

“Research has shown that nearly 90 percent of LGBTQ and gender non-conforming school-age students experience some sort of verbal or physical harassment,” Gilligan said. “And the rate is even higher and more alarming among members of the trans community.”

According to a study conducted by the SF LGBT center in January, transgender people of color are three to four times more likely to feel unsafe at home, in their neighborhoods and at work, compared to LGBTQ respondents overall. The same study said that more than 50 percent of transgender youth of color feel unsafe on public transit.

Lexus Killingsworth, a second year graduate student with the sexuality studies department, said despite overlapping identities, she believes a gap exists in the Bay Area between populations of color and LGBT communities.

“The Bay Area, to me, is kind of seen as a hub of LGBT culture,” Killingsworth said. “I feel like the Bay Area is almost divided. There’s the LGBT culture and there is people of color. It’s almost as if they don’t mesh, and people can have more than one identity, obviously, so it’s really important to talk about this.”

Killingsworth, 23, said she believes it is important to participate in discussions surrounding LGBTQ communities of color to help end discrimination.

“Queer people of color are a marginalized group,” she said. “They are being displaced, they are being killed at disproportionate rates and this needs to be discussed. We need to be finding solutions on how to tackle this problem.”

Gilligan said he invites and encourages anyone to attend events like the one held Thursday, which he said play a key role in addressing the problems LGBTQ people of color face.

“Participate in dialogues with us, talk to us, ask us questions,” Gilligan   said. “Participate in events like the one here on campus tonight, and perhaps most importantly, speak up for us and support us in conversations and forums when we are not there to speak up for ourselves.”