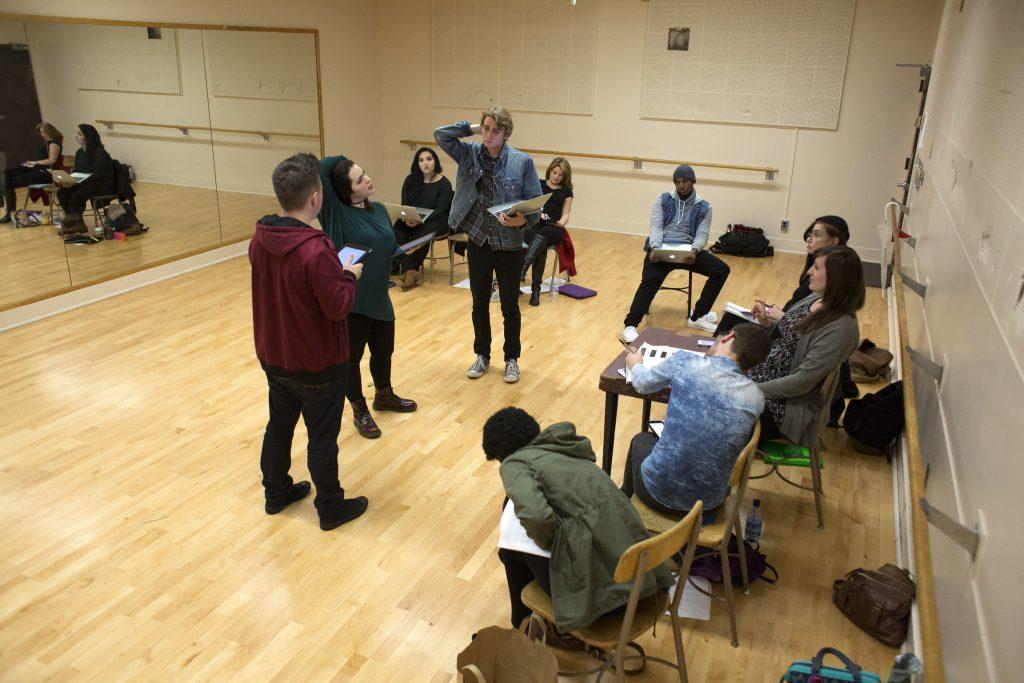 The show’s director, theatre major Elyssa Mersdorf, said her personal goal as director of “Absinthe Green” was to express herself.

“I want my view and my weirdness to come through in ‘Absinthe Green.’ Every artist is unique, and, for me, directing is a great outlet for my creativity,” Mersdorf said.

According to Mersdorf, “Absinthe Green” is a play that challenges concepts of time and spatial relationships. Audiences will be left asking themselves, what really happened and how the relationships between the characters in the play may mirror the audience’s own personal relationships.

“My character, Paul, empathizes deeply with classical literary works more than he respects any human life,” said junior theatre major Nate Budroe. “That connection leads Paul down a rabbit hole of absinthe, addiction and the constant need to fulfill his baser desires.”

Mira Pasikov, a graduate student in English with an emphasis in creative writing, is the show’s playwright. She said she drew inspiration for the play from her passion for books.

“I frequent places where books can be found. As a result, people who are around books – writers and readers, booksellers and librarians – have shared unusual experiences they’ve had in these bookish places. I’ve incorporated some of these incidents in ‘Absinthe Green,’” Pasikov said.

“Fringe Goes Long parallels a common experience in the professional world, where many theaters work with original ideas on a regular basis,” Conboy said.

Pasikov said that each scene of this play is like a piece of a kaleidoscope, which makes “Absinthe Green” different from the other three Fringe plays this semester..

“As you view each piece, the fragments shift as you’re shown different, sometimes contradictory information,” Pasikov said. “It’s up to the viewer to put the pieces together to be able to envision the whole.”

Terry Boero, instructor for the three-unit Fringe course and artistic director of the four plays, said that there are a lot of benefits to participating in the program.

“Many actors, directors and playwrights are given a wonderful opportunity to showcase their talent through Fringe and become noticed even more by the SF State community,” Boero said.

“Absinthe Green” will take the main stage Sept. 25 and Sept. 27 at The Lab in the Creative Arts Building. There will be an off-campus performance Sept. 26, at a location to be determined.