1st down and 20 years: Looking back on Gators football 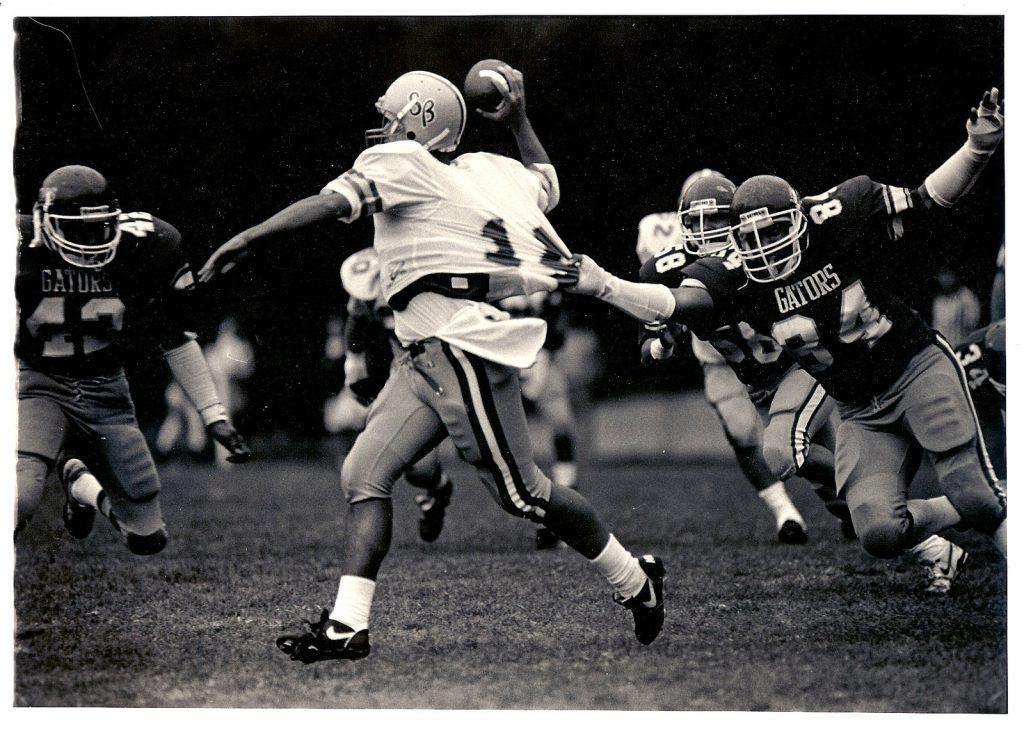 Two decades ago, the echoes of fans chanting for the SF State football squad faded from Cox Stadium for the final time, but for former defensive end Harry Overstreet, the memories have remained.

“I remember one game, where at halftime, Ol’ (former SF State head coach) Vic Rowen came out screaming at us, Knute Rockne style, trying to fire us up, saying ‘there no athlete like a football player!’” said Overstreet, who played for the team during the 1989 season. “And then we came out for the second half and got our butts kicked.”

SF State’s football program was active for 64 years, from 1931-1995, and while the end of its days were not successful, with a 30-80 record over their last 10 seasons, the team was a powerhouse in the Far Western Conference during the 1950s and ’60s, winning the conference 12 times in 20 years.

According to Overstreet, it didn’t matter that the team wasn’t great.

“We were a team and we loved the game,” he said.

The introduction of the CAL-NOW, a 1993 agreement between the California Branch of the National Organization for Women and the California State University System, called for equal athletic opportunity among genders at CSUs, and SF State was far from equal. The decree came in response to the CSU’s failure to comply with Title IX. Without the funding to add sufficient women’s programs, the decision was made to cut football, the school’s largest male sports program, according to a 1995 San Francisco Chronicle article.

Two decades later, football has remained a memory at SF State, and according to former Gators football player and SF State’s current Chief of Police Reggie Parson, it will likely stay that way.

“Football is not fiscally sustainable,” Parson said. “(Bringing the program back) would require a fiscal commitment that would be too difficult to bear.”

For Overstreet, who left the team six years prior to its demise, it was the suddenness of the sport’s removal that was so difficult.

“I remember the shock on people’s faces,” Overstreet said. “They had just gotten a new coach from (University of California, Berkeley), a new class of players, and they were all blind-sided by the news.”

Under Title IX and the CAL-NOW decree, CSUs were required to keep the percentage of female athletes within 5 percent of the overall female student population. In 1995, SF State had a student body that was 59 percent female, but only 34 percent of student athletes were female, according to the same San Francisco Chronicle article.

Many involved with SF State still lament the fallen program.

“We would have more school spirit and a sense of community on campus,” said senior psychology major Holli Rodriguez. “Football makes students passionate and proud of their classmates, and it would be nice to show love for our school.”

Overstreet said he believes football at SF State is more than a sport.

“SFSU needs football,” he said. “Having football diversifies student culture and adds an unbelievable opportunity for kids to play and learn pride and camaraderie.”

Whether or not SF State Gators football ever takes to the field again, certain memories will live on forever, according to the ex-players. Both Overstreet and Parson recounted a historic Oct. 17, 1989 practice, when the players were on the field for the Loma Prieta earthquake.

Twenty years after the fact, Gators football leaves behind a legacy of pride, according to Parson and Overstreet.

“We were a competitive football program with guidance and support from a core of amazing coaches,” Parson said, alluding to legendary head coaches like Rowen and Joe Verducci, as well as assistant Gators coaches turned NFL head coaches Andy Reid and Mike Holmgren.

Not to mention, as Overstreet put it, “We could play ball too.”