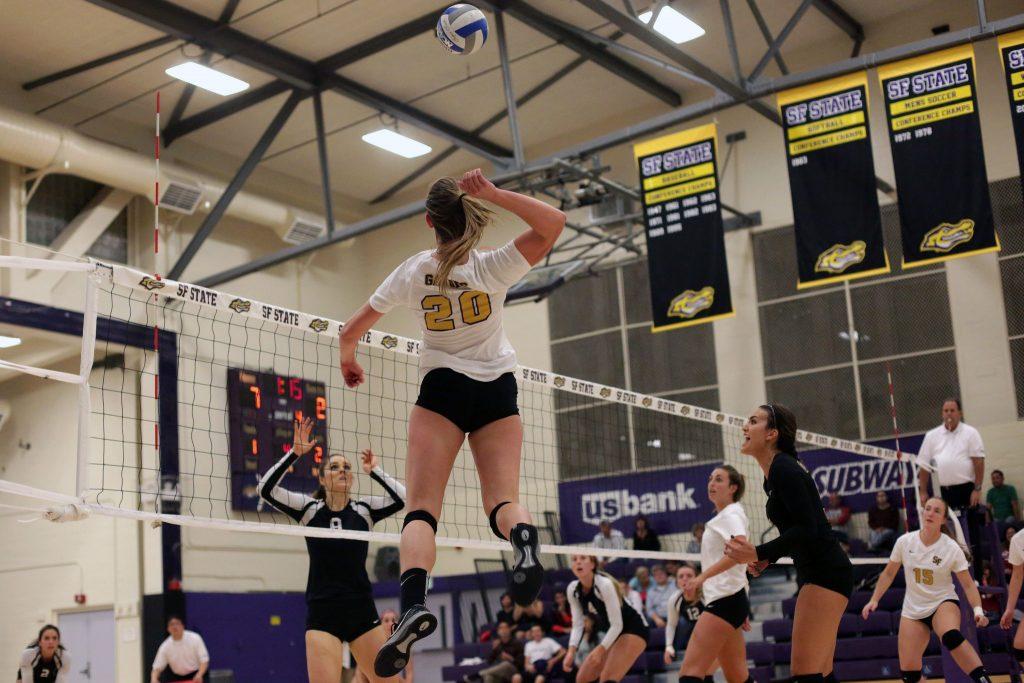 The SF State women’s volleyball team suffered a tough defeat at the hands of Chico State at the Swamp Tuesday, in a five set thriller that displayed the tactical aspect of volleyball.

“We did a great job in making them change their game,” Coach Jill Muhe said, “When they changed, we would adapt to that, and then they would adapt to our change. Volleyball is a game of adjustments and tonight that was clear to see.”

The first tactical move that Chico State made was to shift the defensive focus to the Gators’ outside hitters, according to Muhe, which led to early struggles for star outside hitter, Jaclyn Clark. Clark recently recorded a single-game career high 24 kills against Cal State East Bay.

The Gators responded by shifting the offensive focus to the middle where middle blocker Christine Johnson thrived, notching a team-high 12 kills in the first three sets.

“We trust completely in each other,” Johnson said, “When one side is getting double-blocked, someone else is ready to step up.”

One decision that paid off for the Gators was putting pressure on their blocking game in practice. Johnson said that it was an area that they wanted to work on, and in this game it showed with the team racking up a season high 11 total team blocks.

According to Muhe, the Wildcats put on a defensive clinic of their own.

“They dug a lot of volleyballs tonight,” she said, “We came at them hard but Chico is a great defensive team, and it isn’t easy for anybody to land hits on them.”

With the game locked at 3-3 in the decisive fifth set, Samantha Krakower went down with a back injury. The injury led to an immediate four point run for the visitors that contributed to the final 15-12 scoreline.

According to Clark, however, a fallen teammate is fuel for the fire.

“We all looked at each other and said ‘let’s do this for Sammy,’ and even though we lost, we were working harder,” Clark said.

SF State were underdogs in the contest, coming into the game with a 3-6 record (1-1 CCAA) against a Wildcats side with a 10-3 record (2-1 CCAA).  According to Clark, who finished the game with 13 kills, being underestimated is nothing new.

“In the CCAA, we are always underdogs,” Clark said, “Teams come into this gym counting us out and we have to use that to our advantage.”

Underdogs or not, both teams played a hard-fought game, and either team could have been on top at the end of five sets. Neither team won consecutive sets throughout the match, with SF State taking sets two and four and Chico State pulling out sets one, three and five to win.

Freshman hitter Danielle Reimann continued to impress in her first season, logging 10 kills in only 18 attempts and providing the Gators with another option at the net.

Jessica Nicerio added to her record digs total, which now stands at an impressive 1,515, with a single-game season high of 20. Jaclyn Clark added eight digs of her own to come within 22 of the 1,000 dig mark.

The Gators will play their next match on Friday, Sept. 25, away from home against conference opponents in Cal State San Marcos. After that road game, the team opens up a three-game home stand against Stanislaus State (Sept. 29), California State L.A. (Oct. 2), and California State Dominguez Hills (Oct. 3).