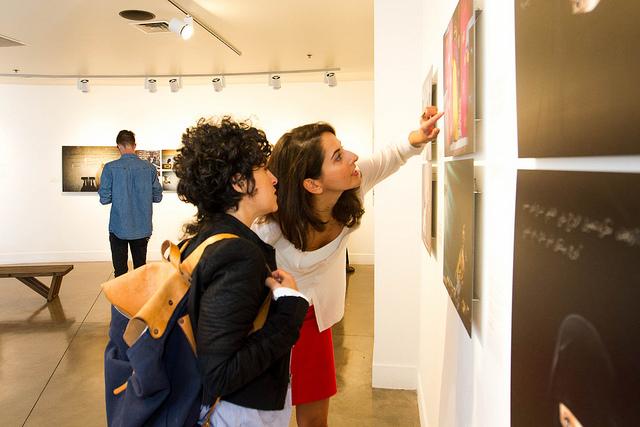 Onlookers gazed deeply into the eyes of a Middle Eastern woman, a vividly tattooed arm peeking out from under her finely detailed garment. Forty-three other images joined the photograph, decorating the white walls of the Associated Students, Inc. Art Gallery in the Cesar Chavez Student Center. Each photograph – the work of seven women from Bahrain, Egypt, Iran, Kuwait and Yemen – captures the daily life, struggles, passions, fears and realities of modern-day women living in the Middle East, according to Senses Cultural, the non-profit organization that produced the show.

“Enduring Power: The Middle Eastern and Iranian Woman’s Story,” a traveling photography exhibit that was first shown at University of California, Davis, opened Sept. 24. A speech and panel discussion led by Karen Koning AbuZayd, who worked for the United Nations for 30 years, preceded the opening at the Richard Oakes Cultural Center.

This leg of the exhibit is dedicated to AbuZayd for her inspiring and continuous humanitarian work in war zones and refugee camps in the Middle East, according to Tata Monfared, producer of the show and founder of Senses Cultural. Having previously traveled from a formal session of the Human Rights Council in Geneva, during her speech, AbuZayd focused on her involvement with refugee women, highlighting the challenges they face and promoting empowerment.

“I want to emphasize what we always talk about with refugee women, two adjectives, that they are resilient and steadfast,” AbuZayd said.  “It’s especially women who often take on real chores like defending the family and looking out for the future when the men are out there being killed or fighting.”

The photo gallery’s central theme centers on not only the lives of the women, but on empowerment and pushing the necessary boundaries, according to Monfared. She said their message is to transfer unbiased information, including the good and the bad that are a part of the women’s experiences.

“The reality of the disaster and suffering of women in the war zone and those affected by war is something the whole world has kept quiet about,” Monfared said. “We want to bring this to attention, and the future generations are the pillars of bringing peace to our world. We need to pay more attention to how we can really help bring recognition.”

Monfared said that when she and the curator, Sina Araghi, started to look for artists to work with, they found photographers who were already active internationally, all with a key message to convey.

They chose photography as the medium for this show because of the realism it provides and its ability to capture moments in life that people can connect with, according to Monfared. She said she’s currently working with her organization to expand the opportunity for more photographers to join who are willing to share in their mission to grow.

Hamideh Zolfaghari, one of the Iranian photographers based in Tehran, focused her images on tribal women and children, highlighting contrasts between modern and traditional culture.

“I try to expose forgotten people, their lives and everything from their perspective,” Zolfaghari said.

ASI Art Gallery manager and curator David de Rozas said that he felt this particular show will bring a creative exhibition from a different part of the world and will, in turn, appeal to the SF State community.

“This exhibition will explore those and the society where they live, through this medium of photography,” De Rozas said.  “We hope that it will attract the student community to come see these projects and also how these women photographers showcase their work through photography and how they empower themselves.”

ASI Vice President of Internal Affairs Sarah Pishny, who oversees the art gallery by providing support and managing the budget, finds the conflict in the Middle East to be extremely prevalent.

“I think that this exhibit is wonderful because it gives such a powerful representation of women who are enduring oppression and overcoming this oppressive power that humans all over the world are having problems being able to overcome,” Pishny said. “It’s quite powerful to see in artwork, and I think that’s the best way to describe it, because artwork doesn’t have a language; it speaks volumes without a single word.”

“Enduring Power” will run from Sept. 22 through Oct. 15, and will then move to the Nonviolence Center in Santa Cruz. The exhibit will be open during current gallery hours, which are Monday through Friday from 11 a.m. until 6 p.m.

Monfared said she believes this exhibit will open the eyes of the SF State community and provide insight into Middle Eastern women’s lives that are otherwise unknown.

“This is where the mind and heart of the future lies, and generations need to understand,” Monfared said. “Our exhibition has a message, and we think the best place to present it is at the university. That’s where we think the future builders of the world exist.”