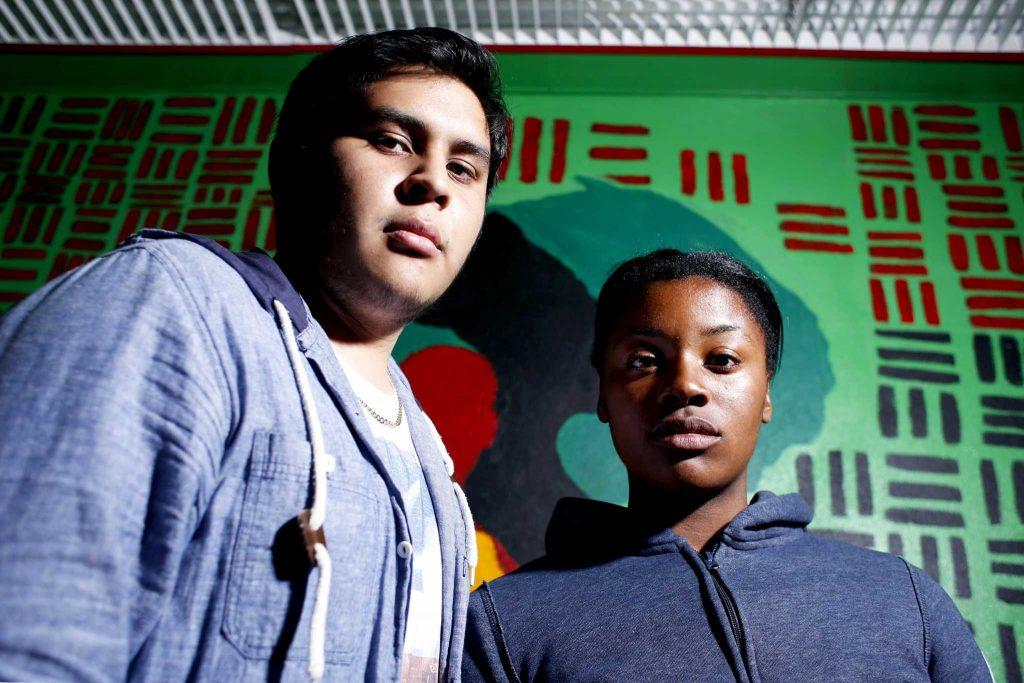 Kevin Flores (right) and Precious Ogbonna (left) both members of the Black Student Union at SF State pose for a portrait in the BSU office in the Cesar Chavez Student Center Monday, Sept. 28, 2015. (Emma Chiang / Xpress)

The Black Student Union will bring attention to everyday gender issues surrounding members of the black community by kicking off this year’s first Black Kings and Queens meeting Wednesday, Sept. 30 at 7 p.m.

BSU Senior coordinators Hannah Wodaje and Ismail Muhammad said they are working hard this year to improve the way black youth see themselves. The BSU wants to encourage the black community to hold themselves to a higher standard through the gathering and think of themselves as “kings” and “queens,” according to Wodaje and Muhammad. Wodaje said she hopes the meetings become a regular event for the BSU.

“Black people are placed at the bottom of the food chain, and we want to help build self-esteem and awareness about issues surrounding our black men and women by creating a safe space,” Wodaje said.

Wodaje said she joined the BSU during her freshman year in hopes of finding a community where she felt comfortable and could relate to other people. BSU helped her grow into the person she is today, she said.

“Being a part of the BSU and addressing issues regarding our black men and women has helped me grow academically, spiritually, mentally and emotionally, in a way that is Afrocentric,” Wodaje said.

While there are many issues facing black women in today’s society, Wodaje said the hardest is dealing with the notion of intersectionality.

Being a woman, being black and battling class status all at once is overwhelming, Wodaje said. Black women are excluded from positions of power, she said, which contributes to the self-hate and insecurities they experience.

“Black women are condemned for being too dark, too curvy, too loud and too angry; yet the world loves to watch, mock and be entertained with the notion of what a black woman is,” Wodaje said. “Black women are among the most college educated in our society today, yet we only see a certain type of black woman shown in our media today.”

The meetings will highlight gender-specific issues for black men and women. Separate rooms will be provided for men and women to facilitate the discussion of gender-related topics to help create a comfortable, safe space, according to Muhammad.

The meeting will not host any professional speakers because the gathering is intended to focus the voices of the community, Wodaje said.

Kevin Flores (right) and Precious Ogbonna (left) both members of the Black Student Union at SF State pose for a portrait in the BSU office in the Cesar Chavez Student Center Monday, Sept. 28, 2015. (Emma Chiang / Xpress)

Freshman international relations major Mia Veal, 17, said she will be attending the Black Kings and Queens meeting and hopes problems regarding black men not appreciating black women will be addressed.

“I’m hoping the meeting will discuss the issue of black men on the internet, specifically on Twitter, who disrespect black women and do not give us the support we need,” Veal said. “Also, it would be good if they could speak about how many police brutality cases are focused on black males and how we as a community need to bring more attention to the black women who are also being brutalized.”

Senior business major Prince Adenola, 21, said he plans to attend the Black Kings and Queens Meetings, because she said it will be a good opportunity to be educated about what’s going on in the black community and address problems that go unnoticed.

“I’m hoping the meeting brings up the hashtag #BlackLivesMatter, because police brutality is getting out of control,” said Adenola. “There are so many issues surrounding the black community, but I think Black Lives Matter is the biggest one that needs to be addressed.”

While many issues will be examined at the meeting, Muhammad said he hopes the group focuses on hyper sexuality, condemnation and the killing of black men in the United States. The terms “king” and “queen” announce to the world that black men and women are more than their stereotypes, he said.

“The terms king and queen represent the knowledge of my history,” Muhammed said. “Historically, the black man and black woman are known as kings and queens, but it is a history that is seldom taught. “We use this term in BSU to empower each other and bring remembrance to times other than slavery.”