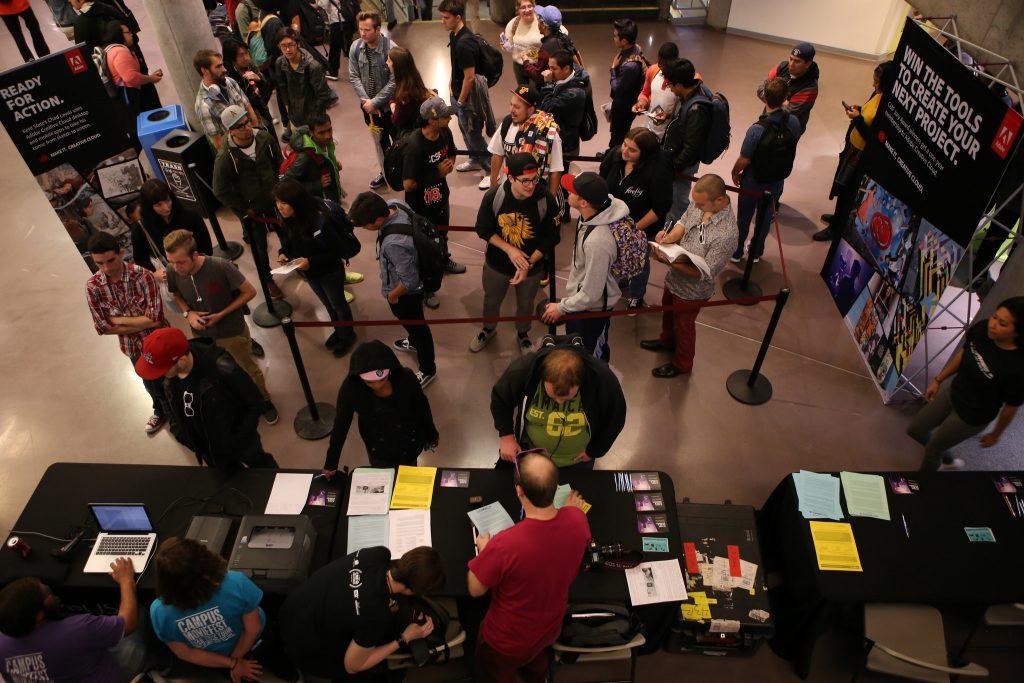 Students line up as they wait to pick up camera equipment during the official start of Campus MovieFest at SF State Wednesday, Sept. 30. (Joel Angel Juárez / Xpress)

The world’s largest student film festival, Campus MovieFest, returned to SF State Sept. 30 as part of its 16th annual world tour. Wednesday marked the start of a week-long scramble for contenders to produce and craft a five-minute long film by Oct. 6.

With more than $100,000 in prizes and equipment at stake, the line to check out the equipment in the Cesar Chavez Student Center quickly swelled to hour-long waits for aspiring and amateur film makers.

According to the Campus MovieFest staff, there is no limit to the number of potential entries, only guiding criteria for the content and length of the films.

Students who sign up will receive everything they need to make a movie, including laptops equipped with Adobe Creative Cloud, Sennheiser sound gear and an HD Lumix or Panasonic camera.

Many non-film majors are entering to see if they have the chops to create a winning film, according to business management major Tristan Aultman. Aultman’s team is hoping to “make something that people remember out of the hundreds of movies they will see,” he said. “I want it to be something intimate and raw,” Aultman said

All movies will be submitted to be judged Oct. 6 by a mixture of SF State students, faculty and staff. The panel will decide what movies will move on to be screened at a red carpet event at Jack Adams Hall Oct. 15.

For Caitlyn McNamara and Darian Adler, teammates and third-year film students at SF State, this is an opportunity to get exposure at a level that is unreachable for most film students.

“I’ve made a few things before,” McNamara said. “That’s why I want to do this; they give you all the stuff for free, so why not.”

The top four SF State movies will have a shot at getting their film showcased at the Cannes Film Festival in May 2016 and will advance to the CMF Grand Finale, held July 9, 2016 in Hollywood.

“If I won, my life would change. I would feel a lot more validated in the things that I do,” McNamara said.