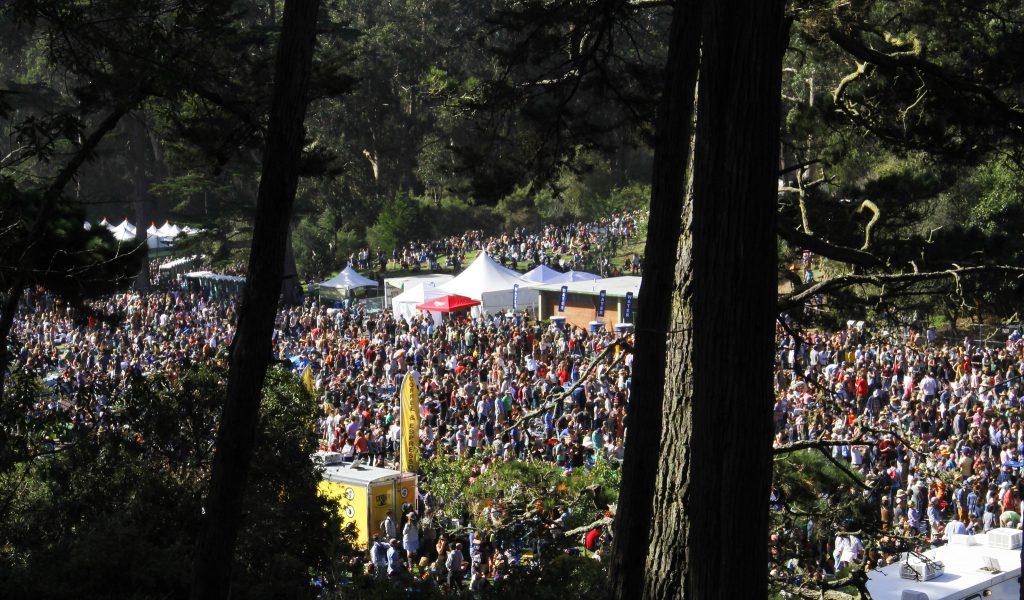 Crowds of people basked in the sun, dancing to the live music and gifting fresh flowers and cold beverages to other festival goers.

“It’s just gotten bigger,” said Michael Pedro, a docent for the festival’s pop up museum. “A lot of people stay away because of the crowds, but I encourage people to come anyway. The sound is so good, even if you can’t get right up to the stage.”

Pedro said he has been a part of the festival since its inception. He started out as a fan, but began volunteering in 2012, he said.

“This is a major part of my life. Every year my wife knows, ‘don’t plan anything for the first weekend in October,’” Pedro said.

Pedro said the festival offers something for everyone.

“When you walk through and see the audiences, it’s old hippies, it’s young millennials,” according to Pedro. “With the artists that come here, there’s something for everybody.”

Pedro also said the quality of musicianship is one of the great aspects of the festival.

SF State BECA major, Tomas Christensen, said one of the most distinctive qualities of the festival is the crowds of people it attracts.

“The music draws all kinds of people from all over the nation,” he said.

Christensen said his favorite part of the Hardly Strictly Bluegrass Festival is the variety of music. He said he has been coming to the festival for the last five years.

“You know, it’s ‘hardly strictly’ bluegrass, but you get a lot of other stuff too,” he said. “(There’s) tons of diversity. It’s free, and it’s just a great time with great people.”

Andrew Rovens, another festival goer and employee at the Three Twins Ice Cream truck at the festival, described the culture of the festival as “eclectic and diverse.”

Rovens graduated from SF State in 2014, but said he has been attending the festival since he was 16 because he loves hearing music he wouldn’t be exposed to otherwise.

The atmosphere keeps people coming back each year, but also attracts newcomers, according to Katherine Thompson, a Chinese major at SF State who attended the festival for the firs time this year.

“I expect to be able to dance, feel the music and get to know new artists,” Thompson said.