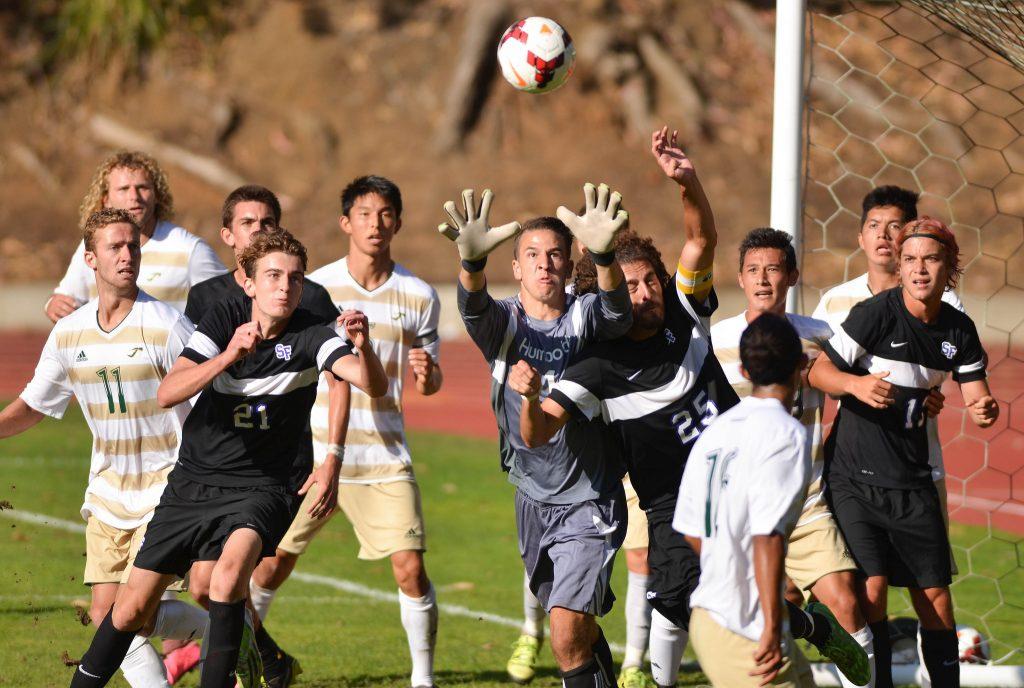 The Gators fired off a whopping 28 shots, but were unable to find the back of the net for the second consecutive game.

One of their best chances came in the 56th minute, when midfielder Robert Kelly shot a ball on a free kick that was barely blocked by HSU goalie Christopher Cherms.

“(Kelly) had a great opportunity to score, and I thought he had the goal,” said head coach Matt Barnes. “Eventually the shots have to start falling.”

Kelly said a lot of the offensive struggles in the game could be attributed to HSU’s strong defense.

“You have to give them credit,” Kelly said. “They laid their bodies on the line throughout the whole game. At one point they had the goalie and three guys on defense all sliding on the ground to try and stop the ball.”

Defensively the Gators kept their second straight clean sheet in a row, led by a strong performance from center-back Max Talbert.

“It’s frustrating that we couldn’t get anything going on offense, but we played good defense,” Talbert said. “This was our second straight shutout in the CCAA, which is pretty good.”

The Gators played defense with a high intensity the whole game and caught some breaks along the way. HSU had two goals negated due to offside calls, in the 11th and 96th minute.

Coach Barnes said he’ll take the tie but had hoped to come out of the two game home stand with at least four conference points. Kelly expressed frustration at not being able to beat the Lumberjacks, who had a 1-8 record coming into the game.

“When teams are down you have to put them down,” Kelly said. “Getting the win would have given us three points and put us right in the playoff mix.”

The Gators will look to get a conference win on the road Friday against the Cal State San Marcos University Cougars.